GM Inspiration: Ways To Bring Age of Sigmar's Nighthaunt to Your RPGs - Nerdist

GM Inspiration: Ways To Bring Age of Sigmar’s Nighthaunt to Your RPGs

Age of Sigmar‘s second edition is out in all its pomp, and plenty of attention is (rightly) falling on its stunning new Nighthaunt miniatures. The Nighthaunt are ghosts, basically, but after looking through the upcoming Nighthaunt army book, they’re something a little more. The Nighthaunt have a really interesting army background, one drawing on folklore and dramatic irony. Maybe even better, both the book and those hot miniatures are versatile as hell.

Because the stories behind all these ghosts in Nighthaunt are so classic, harking back to older traditions than most of Age of Sigmar‘s high/weird fantasy, they’re remarkably versatile. In fact, this is one of those Games Workshop books which is practically begging to be lifted for other games.

Odds are, you’ve never played Dungeons & Dragons with ghosts, specters, wraiths, and the like as anything more than opponents in a dungeon room. Outside a few places like classic Ravenloft setting material, ghosts are speedbumps on the way to the bigger, badder undead lords who are all really behind things: vampires and liches. Sure, the various creature collections for your favorite fantasy RPGs give a little page space to the gothic beauty of why a ghost becomes a ghost, but it’s rare that the ghost story hits the table.

That’s a shame, because ghosts are interesting. Nighthaunt offers a path toward making the dread irony of the ghost story a part of your table. The marrying of the ghost as horde and preservation of that irony in the Battletome is clever for showing that being powerful isn’t required for something to be interesting. It’s easy to plug the Grimghast Reapers or Chainrasp Hordes into your D&D or Pathfinder campaigns, providing an easy to port, fascinating backstory for a night’s adventure.

A Rattling of Chains

To “get” the Nighthaunt, you have to grasp ghost stories. Ghost stories are ultimately about justice and irony. If a living person does something evil, their eternal curse is inextricably tied to that deed. Or, if someone’s death is filled with pain and sorrow, their return is linked to the circumstances of their death.

Nighthaunt (the book, this time) does a great job conveying this. It is about armies of ghosts, of course, because all things Warhammer are about armies. But cracking the book open reveals that each unit type and character in its pages call back to the old-timey ghost stories of murder and sorrow. The effect is that the Nighthaunt aren’t some mindless host of ethereal idiots, but a collection of articulated bad guys.

As one example, the Grimghast Reapers are a unit of ghostly reapers, as the name might imply. Good enough, but dip into their lore and you get something a little more delicious than a simple hard-hitting collection of numbers for the battlefield: each was a murderer given to meticulous planning of the deed, but in undeath they’ve been cursed to kill in a frenzy, with no thought or guile.

This is cool stuff, and every unit has something like this. Healers in life who are cursed with blades for hands in death; The Mortarch of Sorrow, Lady Olynder, who feigned sadness while she assassinated an entire royal family, doomed to feel the weight of every teardrop in the Mortal Realms; these little snippets of background are a fun read and make the army come to life. 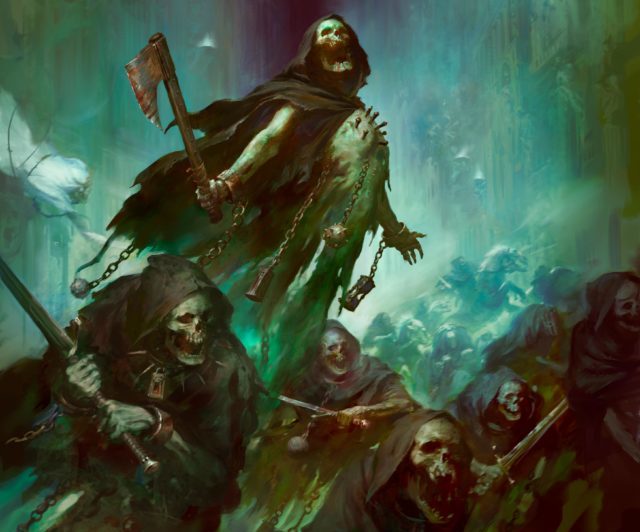 Burn Through the Liches

The Nighthaunt Battletome is plenty good on just its wargaming merits. Ruleswise, the army is a cool blend of durability and interlocking buffs, with a healthy dose of tactics aimed at scaring the opponent to death (no, seriously, enemies close to Nighthaunt units get a -1 Bravery, making them run away more easily). The lore is evocative and fun, bringing Age of Sigmar‘s focus more fully into the ongoing battle over the souls of the living, while drawing inspiration from old folklore about ghosts and spirits.

But it’s also inspirational. There’s all kinds of cool stuff in Age of Sigmar, but not all of it is easy to bring over to other games. Nighthaunt is that sort of book, because ghosts deserve a little better than they’ve gotten in modern fantasy roleplaying. Next time your paladin player is working herself into an in-character froth about the evil undead, or you want to inject a game with a little midnight goodness, leave the liches and bloodsuckers to the side and bring in the Nighthaunt.

There’s another thing which makes porting the Nighthaunt over to a RPG table easy: those miniatures. It’s easy to enthuse about Games Workshop’s miniatures. No matter where their games are at, the company’s miniatures are always top notch, with very few misses over 40 years of existence. But these Nighthaunt are the real deal, a selection of great sculpts which catapult the army into top 10 armies in their all-time catalog. Most places wouldn’t dare try to do the delicate robes and lines of the Nighthaunt range, but they’re here and they look like ghosts, which is one of the hardest things of all. 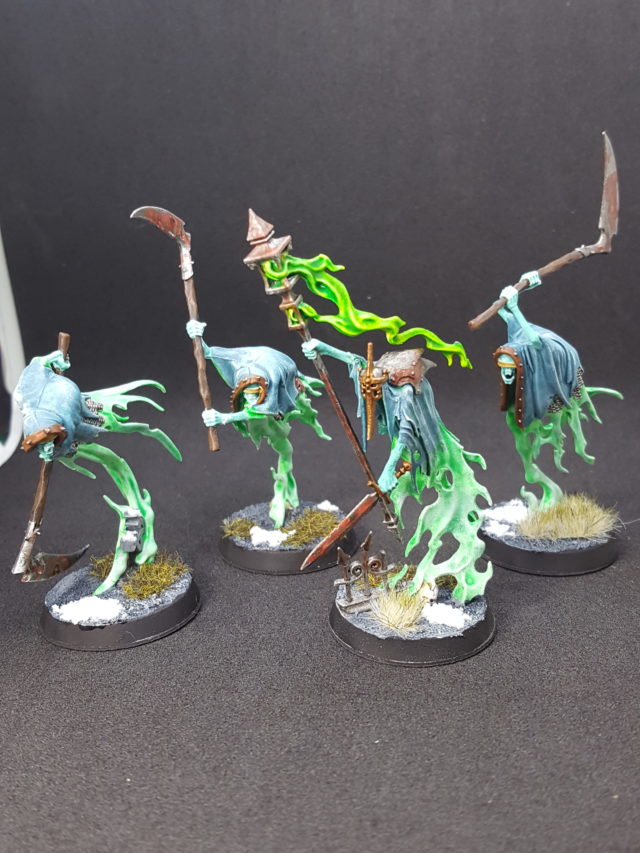 If the background leaves you cold (it shouldn’t, but people have all sorts of tastes) and you’re not interested in the Nighthaunt Battletome, if nothing else, these miniatures should tempt you if you take a more tactile, map-based approach to your roleplaying. A few of the Nighthaunt miniatures representing your favorite spooky villains should spike the visual quality of your table.

Got a favorite ghost adventure from your table? Share it in the comments below!