In 2011, fledgling animated company GKIDS, which had put themselves on the map with the Irish independent animated feature The Secret of Kells the year before, scored their biggest coup yet as a company by obtaining North American theatrical rights to the Studio Ghibli catalog, previously held by Disney.Â They subsequently attained home media distribution as well in 2017. Ghibli valued the theatrical experience, and Disney had mostly been interested in DVD.

“They had very exacting exhibition standards for their catalog,” GKIDS presidentÂ Dave Jesteadt told Nerdist. “No 35mm printsÂ existed in North America for their titles. So part of the agreement was we agreed to create show prints for their entire catalog, and in return we could create retrospectives around the country. And so that’s how we got started. We actually created 35mm film prints and starting with New York and Los Angeles and other major cities, began these sorts of complete retrospectives for all of their films.” In 2016, with DCP becoming the norm and Fathom events a familiar facilitator of limited runs, the company did a national anniversary screening of Spirited Away.Â Last year, they expanded to Ghibli Fest, a year-round series of weekend screenings of the best movies from Hayao Miyazaki and others. 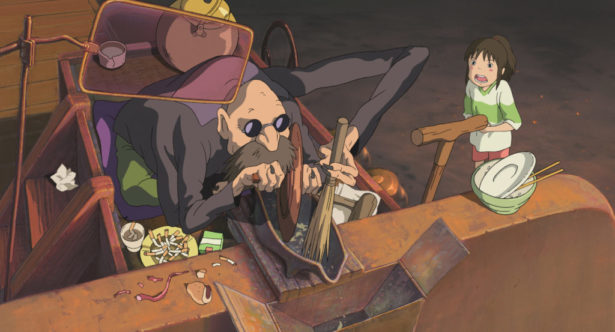 Some moviegoers still avoid Fathom events, with a perception that they’re just projecting a Blu-ray, but Jesteadt assured us that this is definitely not the case for Ghibli films. “The studio would kill me!” he laughs, comparing the studio’s exacting standards to those of director Stanley Kubrick. “You are absolutely watching a restored DCP that was created by Studio Ghibli with their technical lab, based on scanning the 35mm film print and the negatives from all of that. So all the films are looking great at this point.”This year, as a special part of the promotion, GKIDS has decided to reconstruct the original Japanese movie trailers, which have a very different vibe from normal U.S. promotion. We already showed you the one for Spirited Away; today, we can unveil the vintage-style look at Castle in the Sky, the final film in this year’s fest, which screens this coming Friday/Saturday/Sunday.”If I had to task ourselves with creating a new trailer now, it certainly would not be the direction we would probably go in, in a conventional sense,”Â Jesteadt says. “We’re sort of trusting in the fact that audiences are already largely aware of these films; we don’t have to necessarily focus on the most obvious sales points for every single film.”GKIDS director of production Jorge Soto explains how these trailers came about: “What we did was look at the original trailers, and shot-for-shot, frame-by-frame, remade them using our assets that we have, because we also distribute all the home video for Studio Ghibli,” he told us. “So we would take the ad, and wherever there’s a graphic that had some Japanese text, we would recreate it in English — sometimes leaving original Japanese in there, too, and make the text relevant to our release, like the current dates. Other than that, it’s pretty much translating what the original ad said, and recreating the graphic to the exact same style, but now in English.” 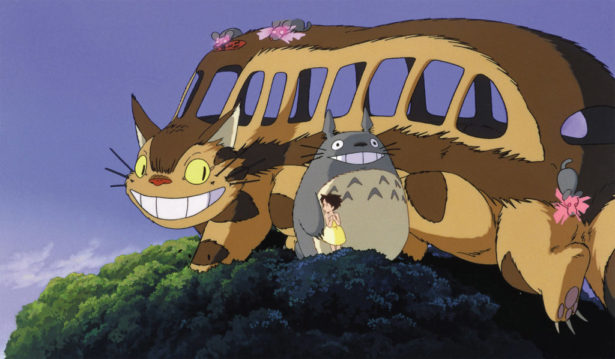 Translating the text isn’t just as easy as adding new letters, as Soto specifies, “If we try to make our new text on top of the footage, it will look too clean. So we try to match the grain, or sometimes the dirt. We try to match whatever the original graphic looked like, and if that includes some ‘imperfections’ that kind of gave it that retro feel, we recreate that too.” He’s more of a perfectionist than he expects fans to be. “It’s one of those things where we know that no one is going to be looking at them frame-by-frame, but we do internally, so we know that what we’re doing is true to the original trailer.”So far, Soto notes the response to the trailer, “I think maybe we tapped into the original nostalgia that made people want to see these movies on the big screen in the first place.” Soto recalls his own gateway into Ghibli films was watching Spirited Away at the beach on a tiny portable DVD player when he was ten years old, and even in such low quality, with lots of interruptions, he was hooked.For Jesteadt, it was a VHS of My Neighbor Totoro. “I think we ended up buying and replacing the tape several times because we kept lending it out to other families who kept it or passed it along, so I think we sort of made it our part to sort of ‘spread the gospel’ in the early days,” he recalls. “And then the first theatrical experience was Princess Mononoke, because that was one of the first titles that actually got released theatrically in cities. to see something like that actually in the theater, it was something I had never seen.”