A Giant Whale Sculpture Saved a Train from Crashing

Here’s an example of coincidence that goes all the way up to 11. A commuter train in the Netherlands was recently saved after going off the tracks. Although the exact sequence of events is unclear, the train was moving fast enough to hop its bumper stop. (A bumper stop is what prevents railway vehicles from going past the end of a physical section of track.)  It appears that the train skipped the bumper and launched itself over the surrounding platform railing. At this point, it slammed into one of a pair of giant whale’s tail sculptures built beside the tracks. The train finally came to a halt 33 feet in the air above a surrounding body of water. Incredibly (of course) the pair of diving whales that make up the statue only consist of plastic and polyester.

Not only is a whale’s tail known as a fluke, but the name of this sculpture is literally Saved by the Whale’s Tail. And the sculpture did indeed do some saving, as one of its faux whale flukes saved the train’s operator from what could’ve been serious injury or death. The Guardian reported on the incredible incident, which occurred at a station outside Rotterdam.

“I am [in amazement] that it is so strong. When plastic has stood for 20 years, you don’t expect it to hold up a metro train,” Maarten Struijs told The Guardian. Struijs, who created the sculpture of the whales’ tails jutting out of the water below the elevated metro line station, also said that he “could never have imagined it that way, but it saved the operator’s life. The damage is an afterthought.” 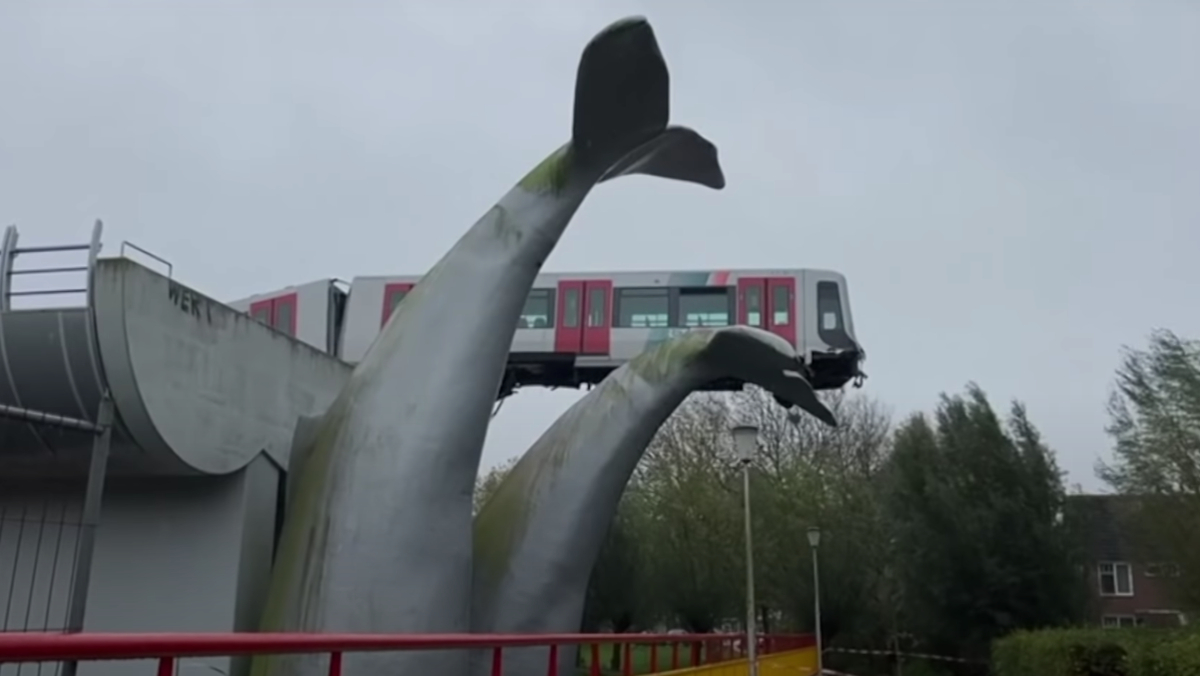 Luckily there were no injuries or deaths, and the operator was the only person on board. And, as of this writing, engineers are working on how to remove the train from the whale’s fluke safely. If things continue the way they’re going, however, it’ll be up to a bystander whale captain with a degree in civil engineering to save the day.

Modern art saves lives.
Last night in Rotterdam, the subway train went off the rails and hung on one of the whale tails. It is ironic that the installation with the tails is called Saved by a Whale's tail.( 📷 Arie Kievit) pic.twitter.com/ttSYGeWQfY