Getting Deep With Submerged - Nerdist

Getting Deep With Submerged

There are several games that feature a post-apocalyptic setting, such as the forthcoming Fallout 4 and Mad Max, where survivors must find a way to keep alive while battling the odds. But Uppercut Studios’ Submerged sets itself away from the pack, foregoing the usual action route in favor of a unique storytelling arc – one that players will be intrigued to see through to the very end.

When you’re first introduced to Submerged, shades of Waterworld seemingly enter the picture, as a boat comes sailing across a plant-laden city covered in water. Inside the boat is a young woman named Miku, along with her brother, who’s been mysteriously injured and must be tended to in order to keep from dying.

After placing him carefully on a nearby cot, it’s up to Miku to explore this abandoned city and find items that will help her. This includes a health kit to keep her brother’s bleeding down, as well as clues that not only provide a better idea of what happened to the city, but also Miku’s family as well.

What’s unique about Submerged is it’s a game that provides players the freedom to explore around the city and even climb up buildings, but removed the threat of death. Even while she’s hanging over the edge of a desecrated structure, Miku is hardly ever at risk, so she can continue climbing and eventually find a useful item or photograph. 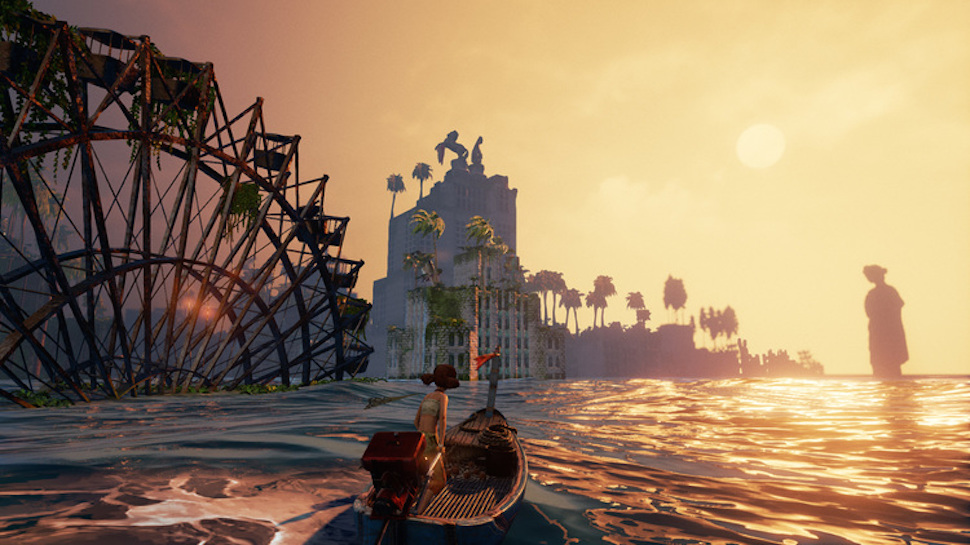 As Miku makes progress within the game, more pieces of the story open up in different sections. These are non-descriptive images that indicate obvious themes, such as family or natural elements (such as a hunter going after fish with a spear). The more progress she makes searching through the town, the more story elements become revealed.

Even without the inclusion of combat, Submerged is a fascinating game that thrives on two elements. The first is being able to go anywhere in the city that you please, and even seeking out items from afar using a telescope. (Don’t worry about leaving your brother behind – he’s safe in the resting place where you left him.) The second is having to explore the city to find these items. Sometimes there are clear markers that indicate where you need to go next (whether on foot or using the boat you arrived in), but sometimes you’re required to look around to see where you’ll need to head next.

With beautiful visuals that give you hints as to what this town might have been at one point (between a clock tower with grass growing out of it and a hotel with collapsed walls), as well as music that plays more towards a somber theme than the usual banging drums of post-apocalyptic fare, Submerged definitely takes an inventive approach for the genre, relying more on discovery and learning more about yourself (and the city) rather than creating makeshift weapons and fending off foes for survival. You’ll be able to discover this provocative world for yourself, as the game is available now for PlayStation 4, Steam/PC and Xbox One.