Get Ready To Become Obsessed With Vigilant - Nerdist

Get Ready To Become Obsessed With Vigilant

There are a lot of superhero movies and even more superhero TV shows. While I love everything about superhero shows, sometimes even I have to admit that they can start to feel the same. While I love to think of myself as badass as Jessica Jones, as honorable as Supergirl, and as skilled a fighter as Black Canary, I have to face the facts: I’m just a normal human. But sometimes, it can be nice to watch normal humans try their best to do crazy, super human things to inspire us to do amazing things. Or in the case of the Evil Iguana Production’s latest web series, Vigilant, sometimes we want to watch a normal human try to do super human things and totally suck at it. You know, whatever floats your boat. 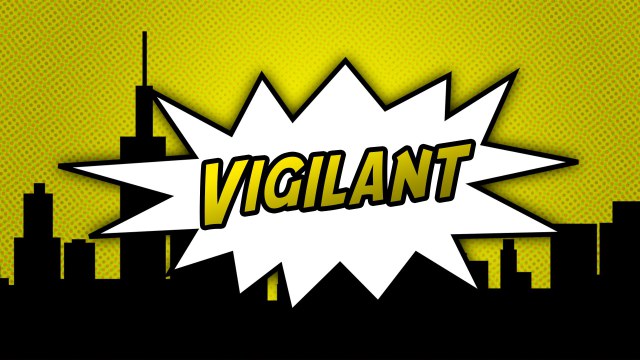 Vigilant is the perfect show if you’re looking for a superhero that strays from the normal superhero story. The show follows Wayne, a guy who has no money, no girlfriend, and really no hope. Feeling directionless, he decides to start protecting the city as a vigilante known as The Watchdog. Wayne ends up joining with two other vigilantes, Virago and The Silencer, who do their best to help him go from a hapless wannabe superhero to… a slightly less hapless wannabe superhero. Wayne has a lot of heart, but he’s not fast, he’s not strong, he’s not brave, and he has a really bad habit of getting a violently bloody nose whenever he sneezes. Still, Wayne wants to make a difference, and he continues to work to help people in need.

While the story is a ton of fun, what really makes Vigilant stand out in the saturated world of superhero shows is the characters. Wayne doesn’t have your typical vigilante origin story. Sure, he’s not really been living his best life, but he wasn’t trapped on a hellish island for five years, he didn’t watch his parents die in an alley when he was a kid, and he wasn’t trained by the League of Assassins. Wayne’s got a solid support system in his friends, and while they’ve got their doubts about Wayne’s foray into the vigilante life, they ultimately they support him. I wish I could relate more to someone like Jessica Jones, Sara Lance, Oliver Queen, or Bruce Wayne, but the fact is, out of all of those, I’m definitely more like Wayne than I’d like to admit. He’s just a goofy guy who’s trying to do something bigger than himself. Watching a superhero show where the main character seems very flawed (and not in a tortured, man-tears sort of way), goofy, and very human is a fun change of pace. And while characters like Silencer and Virago are awesome and bad-ass, I love watching Wayne have normal interactions with his friends, and his relationship with Rita, the first person he “saves,” is very normal, despite the fact that he moonlights as The Watchdog. Vigilant is funny, and they manage to weave in humor with superhero story lines in a fun way, but it’s really the characters that kept me watching.

I think a lot of that has to do with the brains behind Vigilant. The show was created by Kyle Bridges and Zac Coleman, and is written by Kyle, Zac, Craig Deering (Wayne), and Allen Murphy (Chris). These guys have been making web videos together for years, and that chemistry absolutely comes through on camera. Allen and Craig play best friends in Vigilant, and their real life friendship makes it almost impossible not to fall in love with their characters.

Vigilant is a great example of what makes YouTube and the internet so awesome. It’s an example of friends having a cool idea, and going out and creating something new and exciting instead of waiting for someone else to create it. Obviously, we at Geek & Sundry have a soft spot for that since our fearless leader, Felicia Day did just that with The Guild.

If you haven’t watched Vigilant, then now’s the time. Take a look at the trailer for the show:

Have you watched Vigilant? What did you think of it? What are some other awesome web series that we have to check out? Let us know in the comments!