Get Kids Excited for D&D with Good Ol' "Dungeonology" - Nerdist

Get Kids Excited for D&D with Good Ol’ “Dungeonology”

Dungeons & Dragons is endless fun, but getting kids into D&D can be a chore. There’s math and you keep getting asked why is this more fun than playing Call of Duty?

In their continuing effort to provide the nerd community with new products we didn’t even know we wanted, Wizards of the Coast, Studio Press, and Candlewick Press have united forces with New York Times-bestselling author Matt Forbeck to produce Dungeonology, a book that shows exactly why D&D is so awesome that it has been inducted into the Toy Hall of Fame.

Words to Excite and Delight 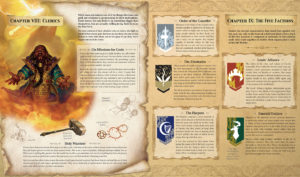 Dungeonology is a book that exists entirely within the fiction of the Forgotten Realms, the universe of 5th edition Dungeons & Dragons. Purportedly written by muckraking adventurer Volo Geddarm, the book gives advice on how to successfully explore dungeons for fortune and glory.

The voice of Volo is both fun and off-color. On the first page of Chapter 1, Volo warns his readers:

One brash adventurer chose to ignore my words and charged ahead of his friends, paying no heed to my warnings or those of his companions. He wound up being swallowed whole by a froghemoth. Even though he survived, his friends tell me that no matter how hard he scrubs, he always smells like the bottom of a stirred-up swamp.

Volo goes on to give a wonderful breakdown of the Forgotten Realms and how to go about exploring dungeons. In other words, young readers are told exactly what they will do if they play D&D, and they are shown the fantastic and terrifying world they will get to explore if they do so. 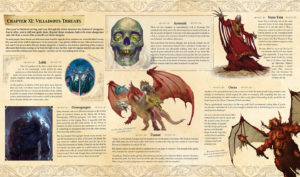 The book is also amusing beyond words. Aimed at 10 year-olds, the volume has gorgeous illustrations, pull-outs, pop-ups, mini-books within the book, and even a letter from Elminster himself! The book offers endless tidbits to be pulled open, folded out, picked up, touched, and in the case of the letter from Elminster, broken open. The pop-up map of the Sword Coast is especially eye-popping, as it opens up to be larger than the book itself.

Puzzlingly, reviewers of Dungeonology on Amazon.com have damned the book for these very features. One wrote, “If you no longer need mommy to tuck you in, you may want to look for another book. Seriously, a pop-up?” Another wrote, “I wouldn’t recommend this to anyone, unless you’re a brand new, very young player.” Really, friend? You don’t say. Given that Dungeonology is part of the Ology series, which are aimed at children, it seems silly to complain that these books, indeed, target young readers.

Every role-playing game hobbyist who wants to see the hobby survive should want as many people playing role-playing games as possible, and as many young people playing role-playing games as possible. Dungeonology explains why we game. It makes the reader want to strap on a long sword and take their first step down into a dungeon. And while other products, such as the Dungeons & Dragons Starter Set explain how to play, no other products shows so beautifully why. With Volo’s natty narration and the volume’s gorgeous tactile features, it targets a fresh audience, one that will know what Faerûn is, and why everyone needs a Bag of Holding, before they even hit middle school.

The book may not be bound for your library if you’ve been playing D&D since Frank Mentzer wrote the Red Box, but you should be buying this book in bulk for your nieces, nephews, sons, daughters, and neighborhood kids, because it will help the hobby grow. And wouldn’t you like to be able to play some D&D with them after Thanksgiving dinner?

How did you get into gaming? Let us know in the comments below!