Meet GaymerX. The LGBT gaming and geek culture convention had its start on kickstarter in 2012, gaining enough funding to launch in 2013. It’s third iteration, known as GX3, took over the convention center in San Jose, California for three days this past weekend.

Geek & Sundry spoke with Gordon Bellamy, an advisor for GX3. A Harvard-educated game designer who worked on titles like Madden Football for Electronic Arts, Bellamy offered guidance and support to Toni Rocca and Matt Conn, the president and founder of GaymerX respectively. Here’s what he had to say about this emerging group of gamers and the role cons like GaymerX play in at the intersection of the LGBT and gaming communities.

What’s your background as a gamer yourself, and how did you get involved with GaymerX?

Gordon Bellamy: I am a lifelong gamer. I have spent literally a lifetime going to and helping create games and game events and their desire to shine a fun positive light on a broad range of gamers, as both people and players resonated with me. Currently, I am helping startups and am a visiting scholar at the USC Games program.

I also am gay, married, [have] three dogs, help lead a group of gay game industry professionals on Facebook, and am an active participant in Blacks in Gaming. I got involved with GaymerX as a supporter of their initial Kickstarter.

What was the substance of your original conversation about GaymerX? How do you help GaymerX to thrive?

Bellamy: The original conversation was about respect for our craft, and the people who have committed their professional and personal life to it, and how to explore substantive issues with depth while also cultivating fun at a show. I also encourage them to take best practices from other events… for example the GX3 Sprites are much like the amazing Conference Associates from GDC or the phenomenal Enforcers from PAX.

I think it’s their focus on letting the attendees be the stars of the show that makes it thrive; the game rooms, the fantastic cosplay, the wedding proposals… And speaking of thriving, there is going to be a GaymerX in Australia, so not just the event is thriving, the idea is thriving. And when I say it helped me grow, I’m part of the insular industry, I basically hang out with game industry folks, my school friends, and my awesome dodgeball team. GaymerX has exposed me to all sorts of fantastic people that I would never have met, and I value that.

What changes have you personally observed within the gaming community and its understanding of LGBT gamers in the years since GaymerX begin in 2013?

Bellamy: For gamers it’s probably best to think of it along three axes: orientation, gender identity, and taste in games, and that it’s good and valuable to celebrate differences across all three axes. As gamers, we face this opportunity all the time with the platforms and games we cherish and with which we identify. My biggest personal observation is that gamers are coming to understand diversity in orientation and gender identity in the same positive way, by sharing great game experiences with folks who are diverse across the other two axes. In this wonderful connected era of both games and social networks, those experiences are just an organic part of being a gamer, no matter what person or platform or franchise makes you happy. 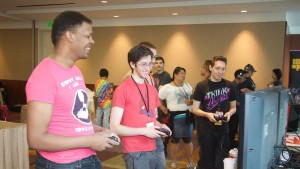 What do you think is one of the biggest misconceptions about GaymerX and the LGBT gaming community and how can it be addressed?

Bellamy: From the inside of both of those communities, I think I have learned the most about the diversity of the types of games that LGBT people enjoy, and that games are a specifically powerful axis of identity and that many people identify as powerfully with the games they play and how they play them as they do with their orientation, or gender identity.

People on the outside of queer identities sometimes have the same learning curve of valuing someone’s orientation or gender identity as who they are versus something that they do. Perhaps in that way, gaming and LGBT experiences have a strong alignment in that they used to be very powerfully driven by a coming out narrative, but for the younger generation the identities are more mainstream and thus there are fewer misconceptions amongst younger people about GaymerX, gaming, or diverse people.

What is the future of advocacy within and on behalf of the gaming community?

Bellamy: The future of advocacy will be multifaceted.  You will see more evocative and seminal stories told from within the games themselves because there is nothing more engaging and influential than playing games for our community. Secondly, I think you are seeing a new generation of authentic and popular voices in the broadcaster communities emerging on Twitch and YouTube. In order to retain their audiences more and more these influencers will explore who their communities are and why they are playing. That exploration will cultivate advocacy for the interests of those communities which will transcend the enjoyment of a particular game to a new goal of making being a gamer as an identity more enjoyable. Thirdly, I think from the academic study of games, new thinkers who are examining gaming as a part of culture at large will give birth to some intriguing new debates about how gamers affect the world we all share.

What do you think the future of inclusive gaming is, readers? How does your identity as a gamer intersect with your identity in general? Let us know in the comments!

Behind the Scenes at the Blade Blood Rave

Don’t Call It a Comeback: Archie’s Been Evolving for Yea...