Gaming with Toddlers – 5 Games To Please Little (and Big) Gamers

One of the proudest and most exciting moments I’ve had since becoming a father was the moment my young kiddo first laid eyes on BB-8. I had taken the day off from work to watch him and popped The Force Awakens on in the background for me to watch. The moment that one-of-a-kind, orange and white droid emerged on screen, my son’s face lit up and he wouldn’t stop babbling. The reason it was so exciting was that I’m a huge Star Wars nerd and it seems – at least for the moment – that my son is one too.

I think it’s natural for parents to hope their children share their interests, and natural for us to expose our kids to the things we enjoy in life. Accordingly, my kids have a shelf that’s full (and overflowing) of age-appropriate board games for us to play together. Most of them have been chosen for the ways they can teach and reinforce childhood development, but that doesn’t mean they can’t be a lot of fun. While none are as complicated as Twilight Imperium, I’ve even found a couple that my adult game group enjoys.

Sculptapalooza is a new party game from Educational Insights that hands players an amorphous blob of foamy stuff and asks you to sculpt like Michelangelo. When played with grown-ups, it works like a sort of artistic charades. One person sculpts for their team after drawing a card from a large deck of options. These options also put some interesting restrictions on the players. Often you won’t be able to pick the foam up off the table, making it difficult to represent kinetic objects. Other times you’ll have to figure out how to represent your word while making something that must be placed on your face. It’s a hoot, and we’ve had a lot of fun winding down a game night with a few rounds. 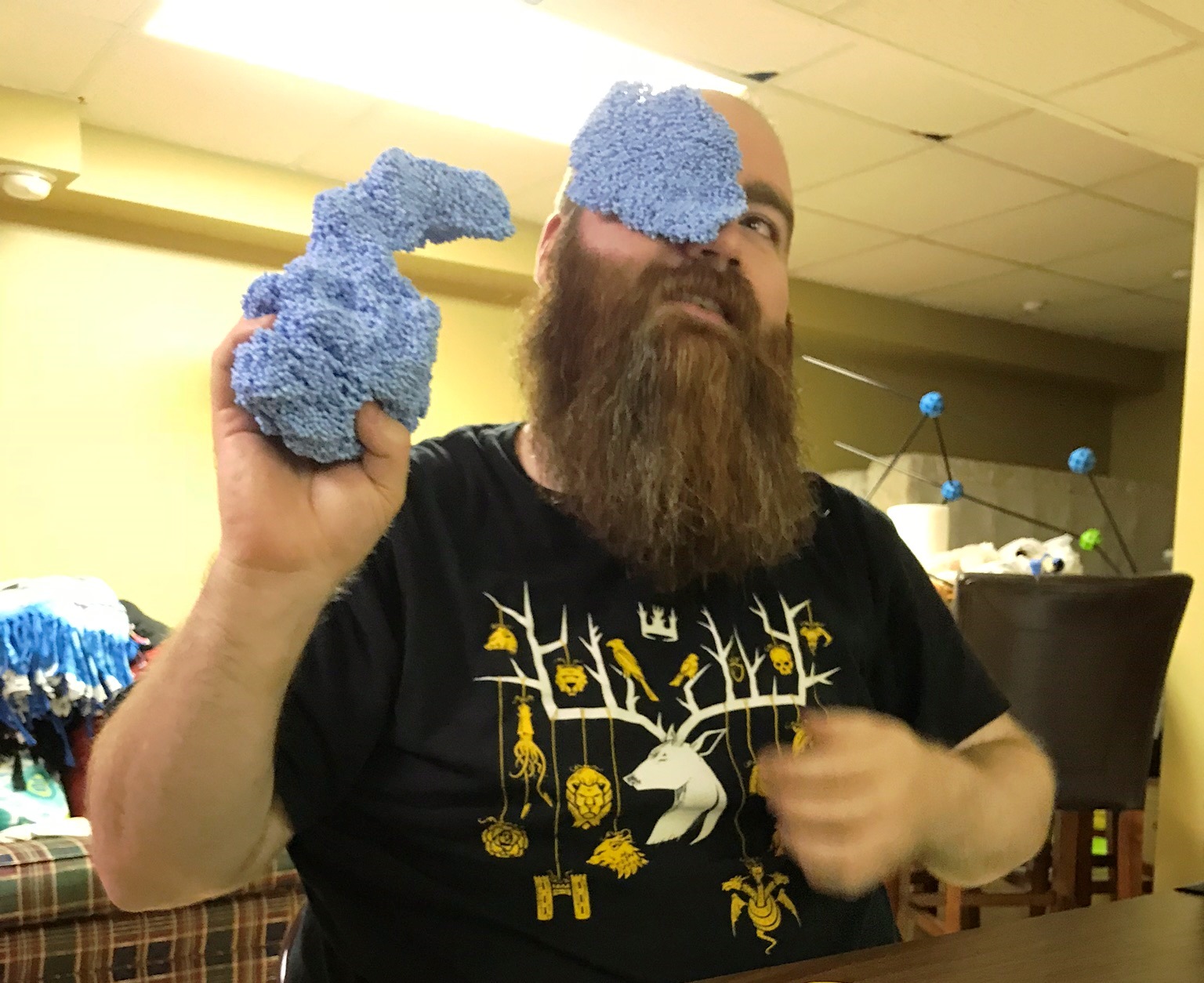 With my 3-year old, Sculptapalooza is no less fun. He’s artistic in general and loves smashing the foam together and creating something. The party game structure reinforces lessons on taking turns and working together, while the deck of cards encourages him to focus his artistic excitement. While criticisms of “Daddy that’s not a good dinosaur” get me right in the heart, I’ll continue to blame my sculptural shortcomings on the medium. The foam is designed to be a little difficult to shape which makes gameplay all the funnier.

Published by Wizkids, This is another game ostensibly designed for adults and older kids that’s just as fun to play with little ones. This game takes places late at night in a zoo after all the humans are gone for the day. The animals emerge from their enclosures to partake in the age-old ritual of ZOOLOGICAL COMBAT. Animals are represented by colored dice that are flicked from the edge of the box into the center arena. Depending on the game mode you’ve chosen your goal is either to land your dice on a high-scoring face, or knock your opponents into the corner holes and take them out of the match. I’ll let you guess which one the 3-year-old prefers.

Again, Kung Fu Zoo reinforces a lot of core gaming elements like taking turns and celebrating your opponents’ actions. Importantly, it also teaches kids to lose with grace – a lesson I could also use help with after a heated mini-tournament or competitive round with my adult friends. The kinetic nature of play is exciting; it’s just a lot of fun to flick dice around an arena and watch it careen around the board knocking other dice around. If you need a good excuse, tell yourself it’ll develop your kid’s fine motor skills – I won’t let anyone know you really want it to practice for the World Kung Fu Zoo championship. 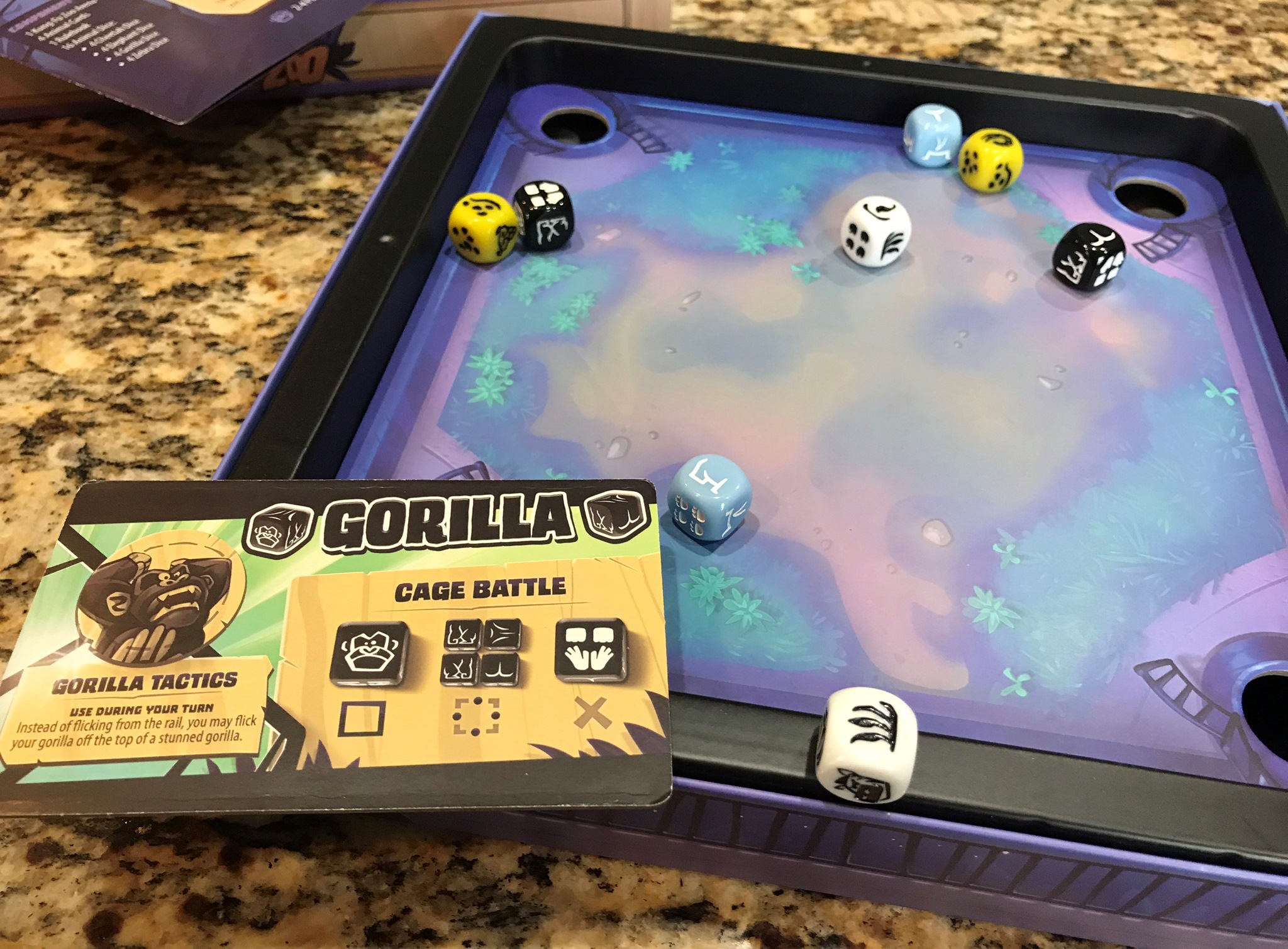 Moving firmly into the children’s game category, Critter’s Closet is a creative game of dress up. Each player grabs a cute critter and begins dressing them for their day. There are hats, glasses, and more. Your job is to deck them out from head to toe in the finest of critter couture. This is a game of tactile textiles. Clothing has different shapes and colors, and there are matching elements to keep kids engaged. This is a perfect game to use to introduce kids to game elements such as taking turns, winning/losing, and the joy of sitting around a table playing together. 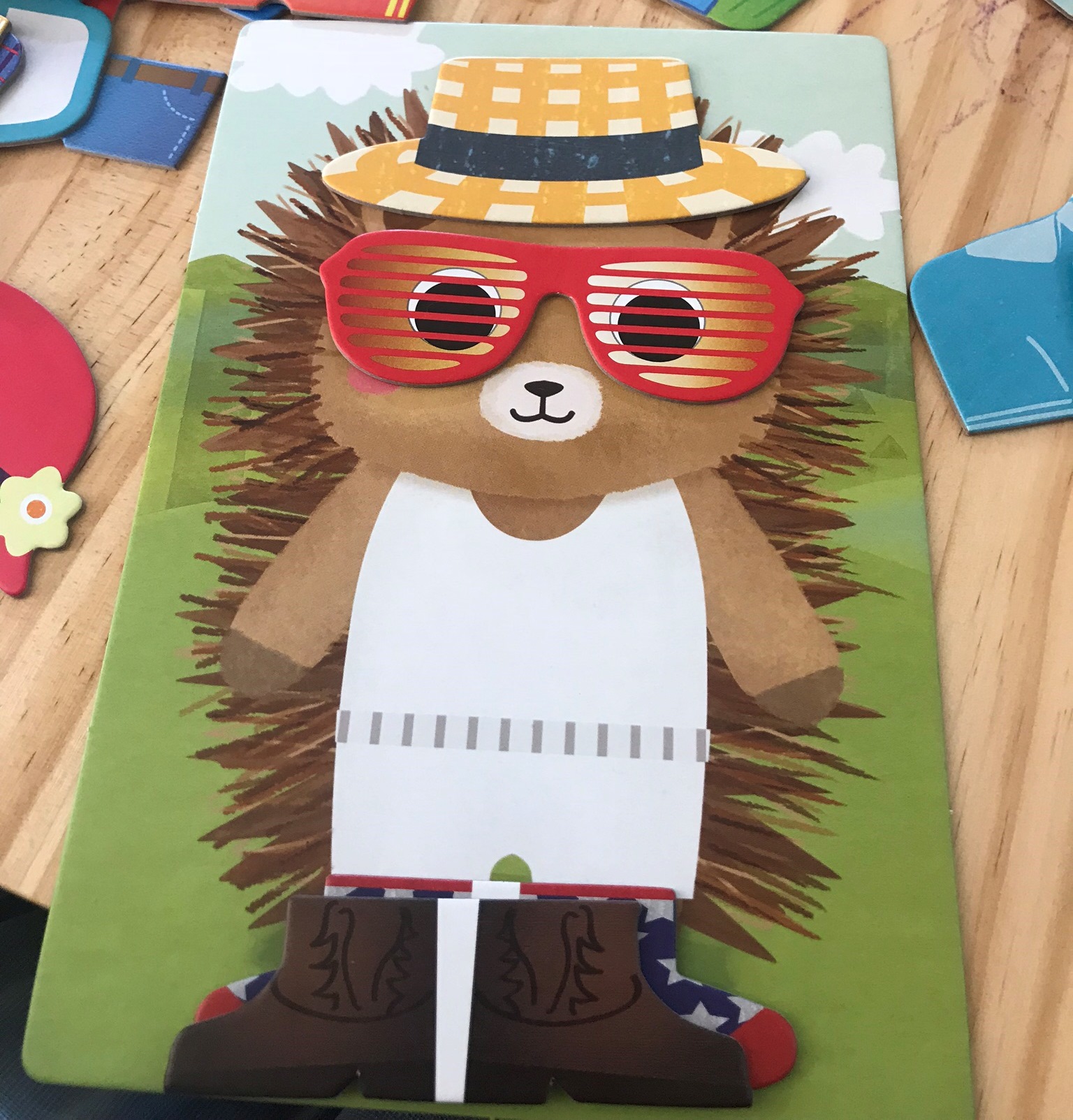 I’m a miniatures painter and wargame player; no one understands the fun of playing games with toys more than I do. While a far cry from Warhammer 40,000, Five Little Fish celebrates the toyetic fun of board games in a similar way. The box comes with 2 plastic fishing poles and 5 segmented fish that sit on the table hiding their telescoping tails. When a fish is hooked and lifted off the table, it’s colorful tail slides down and wriggles in the area – a moment that elicits laughter in kids and a bemused enjoyment in adults.

The point of Five Little Fish is to amass a collection of fish by drawing lily pad cards and trying to find the fish with a matching color. The catch is that you can steal fish from an opponent if you can remember where they put the one with the right colored tail. That stealing element can make it tough on little gamers, but it’s an important lesson to learn in their gaming journey. It’s also just a lot of fun to lay the fish out and learn colors by catching these adorable plastic swimmers.

The last game on this list is the Sping-Go-Round line of games published by Wonder Forge. There are a number of versions of this game, each featuring characters from different children’s television shows. Our set is the Sesame Street version. Each player is trying to fill in a row or column on the shared grid by placing one of their tiles in a space with a characteristic matching what they’ve spun on their spinner. Each spinner features different characteristics. One will have spaces matching the backgrounds of the grid images, while another may have the actual Sesame Street characters printed on it. Upon the spinner landing on Big Bird, you’ll grab a tile and find a Big Bird space to place it in. My son has had fun learning to match the various elements, examining each space to identify which element he’s looking for. He also just loves playing with the spinner and finding Big Bird. 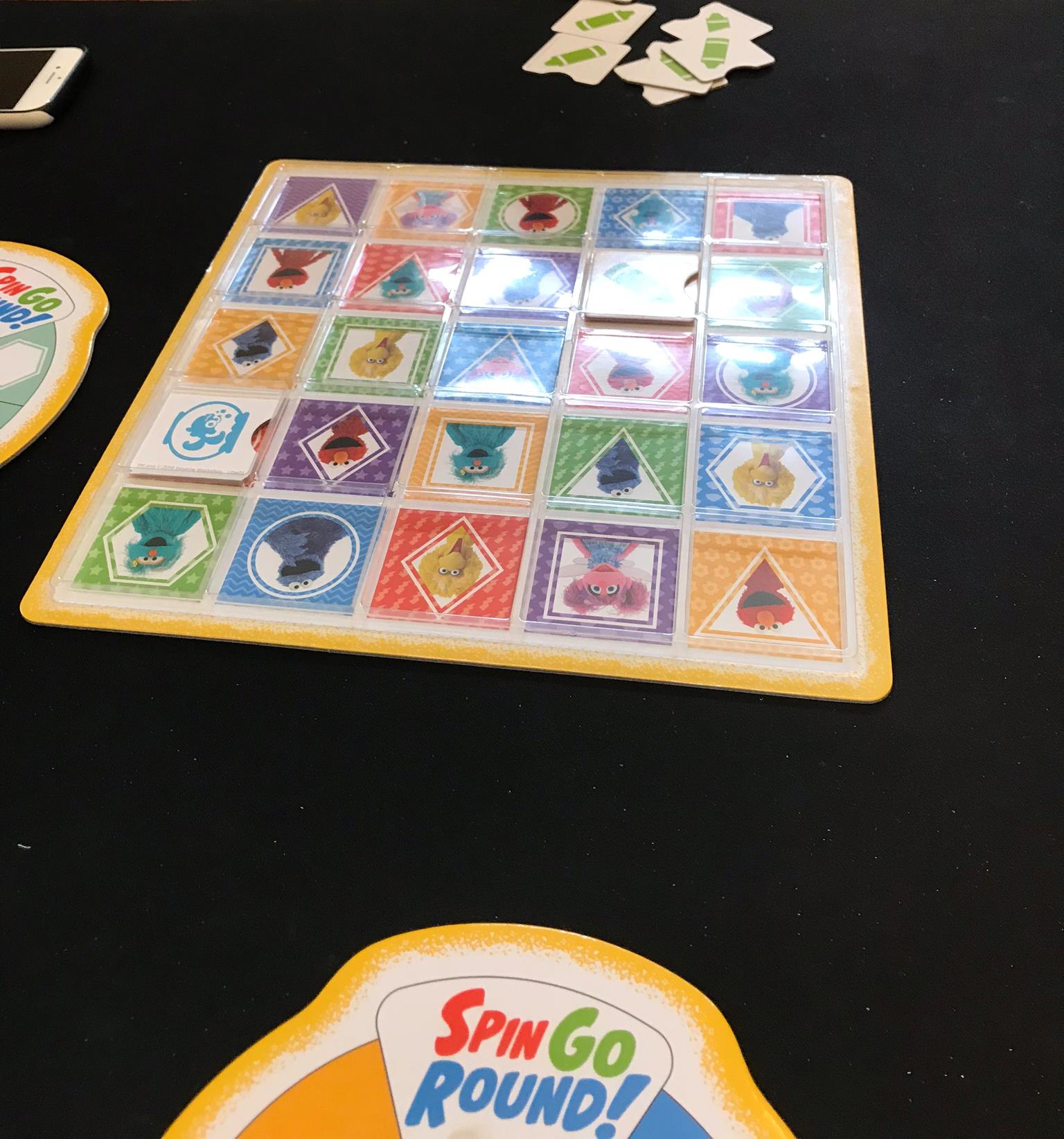 Games are a lot of fun for kids and adults of all ages, and I’ve very much enjoyed spending time with my budding gamer. Seeing him find fun with a hobby that I also enjoy is very fulfilling, and each of these games have provided us special moments that I’ll always treasure. Maybe he’ll grow up to write about board games like his dad, or maybe he’ll leave tabletop games behind as he gets older. It’s impossible to know right now, but for the time being, I’m going to keep rolling, flicking, and spinning the hours away.