Hello, fair citizens of the Realm! It’s that time of year againâ€”the most wonderful of them allâ€”Game of ThronesÂ season. And, in addition to winter:Â spoilers are coming! (And maybe a few swears, too. Woops!) As this is a recap, it goes over everything in crazy detail, so proceed at your own risk and donâ€™t say we didnâ€™t warn you!After over a year of waiting, at last the battle for Westerosi dominance has returned: welcome back to the Throne Zone, y’all! Gosh, it’s been so long we’ve pretty much forgotten HOW to recap, but we’ll do our best. Mostly we’re just so gosh-dang excited that winter is here and we get to witness it at long last! Y’ALL THE END IS NIGH!

Overall, the night focused on one major theme: everybody has a part to play in the wars to comeâ€”and they’re all gearing up. That, surprisingly or not, goes double for some of the more unsuspecting characters in the bunch. Sure, Dany and Jon and Cersei are at the top of the heap (for now), but what we gleaned from the dealings of folks like The Hound, Samwell, Arya, and even Bran (fuckin’ Bran, amirite?) gives us far more insight into the future endgame for the series.Luckily, we got in touch with most of the major players this episodeâ€”an unusual feat inÂ Thrones world, given that there are, approximately, 800,000 characters on the series at any given time. But with so many deaths and unifications in the last season, there are, thankfully, far fewer folks to keep in mind. So where’s everyone at compared to where they were? Let’s break it all down!

Spoiler alert: the Night King is still at it, making his slow crawl towards The Wall with his army of billions.Â Thankfully, the dead and their icy leaders don’t have any magic that helps their rotting flesh move faster, so it’s going to probably take 5 episodes before these creepers actually make it anywhere. Something very unsettling about this army, though? THEY HAVE A GIANT (Poor Wun-Wun) and the wind is at their back. Something tells me their destination is “wherever Bran Stark is at.”

Bran “Did I Do That?” Stark

Speaking of the most bumbling member of House Stark: homeboy’s seemed to grow up a bit in the off-season, eh? (Guess that’ll happen when you watch your friend die and realize his name and existence is all your doing!)[brightcove video_id=”4908233271001″ brightcove_account_id=”3653334524001″ brightcove_player_id=”rJs2ZD8x”]After warging and watching the Night King continue his descent from So Far Beyond The Wall It Doesn’t Have A NameLandiaâ€”something that is surely going to end up biting him in the butt now that he and the Night King are forever connected by that time they touchedâ€”Bran and Meera Reed ended up at Castle Black, Jon Snow’s former Night’s Watch home and the current epicenter of Very Reasonable Freaking Out About The Realities Of The Wars To Come. Edd “Dolorous Edd” Tollett, new acting Commander of the Night’s Watch and Jon Snow’s ol’ Hardhome buddy, was skeptical of Bran and Meera at first, but Bran quickly put his fears to, uh, rest (? relatively speaking) by letting him know he’s the real deal.It was nice to see Bran step up and have a bit of confidence in his abilities, even if he knows he is absolutely in no way prepared for the job to come. Confidence is half the battle of bullshitting your way through stuff, though, so props to him and fingers crossed it all works out. Gulp.

Elsewhere in the North, Jon Snow’s settling into ruling duties quite nicelyâ€”being just and honorable but also not a brute, despite Sansa’s hard-lining and potentially undermining during a Northern Houses meeting. (Sansa: rule number one of being a loosely-medieval woman with foresight and greater understanding is, unfortunately, being quiet in public and then changing the man’s mind in private!) But hey: the series did give us a very obvious nod to its women problem controversy in this scene, and anything that gives us more Lyanna Mormont is more than fine by us!

It’s understandable to see Sansa’s desire toÂ strip the houses of Karstark and Umber of their ancestral homes, butâ€”as Jon so astutely pointed outâ€”it was a real Cersei move of her to posit as much, to which Sansa was all “yeah but like, I learned a lot from her and she’s not so bad in some ways she just drinks a lot and is kinda like, misunderstood, y’know? You haven’t been a woman in this world you don’t understand!!” (I mean essentially.) Which: didÂ anyone see Sansa learning and/or admiring Cersei coming? If anything, we figured she’d be Littlefinger’s little pawn. Which… 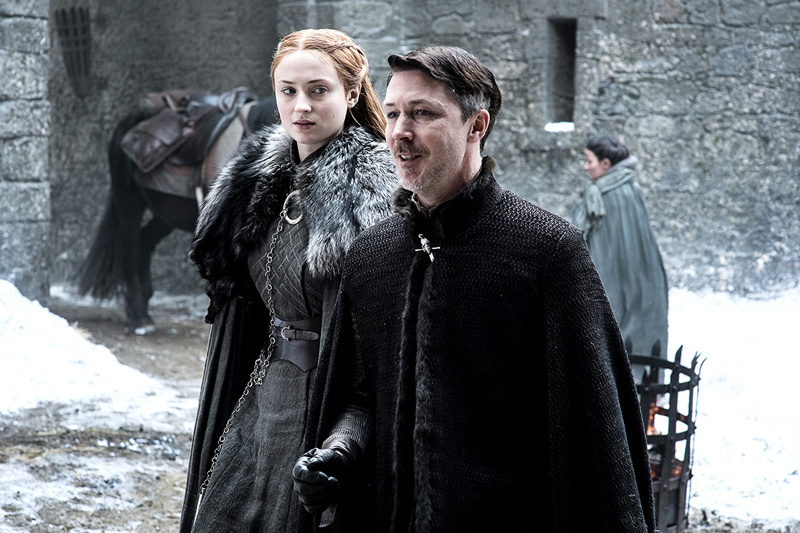 LITTLEFINGER IS THE WORST. Can we rename him Littlefucker? This sonuva is really something else, between his creepy obsession with fucking Sansa and being the ruler of the Seven Kingdoms (which, lol), and his constant need to control and manipulate situations, we sincerely hope they don’t end up working together to mess with Jon Snow. Thankfully, Sansa seemed WAY more aware (dare we say woke?) of the situation and people’s wants. At least she has Brienne of Tarth and Podrick (AWW POD!) to protect her.Which, yes: a moment for one ofÂ Thrones‘ best ‘ships: GIANTSBAE RETURNETH. My heart is full of light.

Down in Delusionsville, Cersei Lannister is having a big big map painted on the floor of the Red Keep in order to be able to see where all her enemies are. Turns out? They’re LITERALLY SURROUNDED BY THEM. Should be chill and easy to fix, right? Just get yourself a bunch of ships by marrying an absolutely unhinged Greyjoy and you’ll be set! Cersei thinks she has it all figured out, but she’s not seeing the bigger picture despite standing right on top of it: ain’t nobody want to bend the knee to her and her rule! CERSEI YOU’RE BEING AN ASS and you WILL pay for it. Hopefully, her arrogance will be the death of herâ€”with any luck at Jaime’s golden hand.It’s interesting to see just how resigned he seems to his sisterlover’s terribleness, eh? Not too long ago they couldn’t keep their incestual hands off of each other. Now? Jaime seems all to happy to keep his distance and let Euron have a go at wooing his unwieldy sister. He knows he’s messed up huge letting her live and lead without him there to stop her. And now she’s bringing a feral rat into the house to play leader. BET IT’LL GO GREAT!

Which, speaking of Euron “Two Hands” Greyjoy: homeboy wins for joke of the night when he trolled the brothersisterlovers with talk of hisÂ two working hands. And Jaime’s reaction was truly, truly priceless. Also: I see your fashion upgrade and I like it, enough to not even raiseÂ an eye at how fast you got all those ships together after your niece and nephew stole the entire Ironfleet and gave it to Dany all willy nilly.SIDENOTE: was anyone else confused by how much time has passed? Especially when it comes to Gilly’s baby Sam Jr.? How is thatÂ kid like 2-years-old now?

Samwell is 100% having the worst go of it on this show. After losing his mentor on the boat ride to the Citadel in Oldtown, Sam has been taking shit for months now, it seems, trying to earn his place and the respect of the other Maesters and Archmaesters that rule the roost (including theâ€”we called it!â€”arrival of Jim Broadbent to the series, who seems not-at-all concerned about Winter and the Walkers. UGH JIMMY BOY!). You see, even though he’s training to be a maester and has a heaping helping of knowledge at his disposal, there’s a lot of information that he cannot yet see because he’s not yet among the robed ranks. Particularly in a creepy, locked-off wing of the Citadel’s enormous, drool-worthy library. (Seriously: the Citadel set is the one I’ve been most excited for and it does NOT DISAPPOINT!)

But Sam believes he deserves access in spite of that, since he’s seen the White Walkers and the Night King with his own two eyes and most of the maesters are doubtful that they’re even real. Unfortunately, his mentormaester would rather he continue to clean up shit. So Sam goes and steals the keys and a couple of books and he and Gilly discover that there’s more dragonglassâ€”the only thing that kills White Walkers/Wights and the one thing that could save the Realm according to Jon Snowâ€”underneath Dragonstone (probably in the caves where they used to keep all their dragons for millennia?).Looks like Jon Snow and Dany’s team-up is going to be over a bunch of shiny rocks! Who knew?AND YES I SEE YOU THERE, SER JORAH OF HOUSE FRIENDZONE!!!!!!!!!! Please get well soon, I mean it SERIOUSLY!

Of course we’d be remiss if we didn’t freak out over Dany’s largely silent arrival to her ancestral home (and birthplace), Dragonstone. After years away, it was magnificent to not only see more of the insides of the place, but also how much the return means to Dany. Though we’re largely unsure if she will end up being a savior or a nightmare to the Realm, it’s clear her heart has always been in the right place and she does NOT take her return to Westeros lightly.

But before all that, we saved the bestâ€”Aryaâ€”for last, not because she had the most major storyline of the evening (she didn’t), but because she simply rules and it’s our goddamn recap so we can do what we want, mmkay? Because: HOW AWESOME WAS THAT MURDER OF ALL THE FREYS IN ONE SWOOP FOR THE COLD OPEN? At first I did not see it coming, though I should’ve since Walder Frey was killed last season (I kept thinking, “is this a flashback to right before?” but that’s because I am not always the quickest). But whether you saw what was happening or not, we can all agree: there is literally noÂ better way to kick off the penultimate season ofÂ Game of Thrones than with a mass-murder of the least-liked family in all of Westeros.

We also got that long-rumored Ed Sheeran cameoÂ and, true to speculation, he did not die (yet), even if the scene went on entirely to long. But he did sing a song! A new one! Because of course! I’ll let the internet do the dirty work of transcribing the lyrics for us (a girl can only do so much), and then we can all speculate about what it might mean together at a later date.Arya did reveal to us her plan and what she’s going to do next: kill Cersei. Anyone else thinking she might try and steal Jaime’s face in order to do it? OOOH PLOT TWIST!

What did you think of theÂ ThronesÂ premiere? Let us know in the comments below andÂ TUNE IN MONDAY at 1 p.m. PST, when weÂ break it all down on our newlyÂ All Kings Considered-ified episodes of Nerdist News Talks Back!

Alicia Lutes is the Managing Editor, creator/co-host ofÂ Fangirling, and resident Khaleesi of House Nerdist. Find her onÂ TwitterÂ but only if you really want to because like, Iâ€™m not your boss.

GAME OF THRONES Season 7 Finale Recap: It’s a Family A...