What the New GAME OF THRONES Footage Reveals

by Michael Walsh
HBO fans were big winners at this year’s Golden Globes, when a network promo included new footage from Game of Thrones‘ final season. With the show’s long awaited return only four months away, we’re beyond desperate for anything Realm-related. Even if it wasn’t much never-before-seen footage, the new material we did see shows an important development of a potentially explosive problem.

The first three shots are actually old footage. The promo opens with the Night King riding Viserion in a slightly altered shot from the season seven finale, when he brought down The Wall. Here’s the original.

And here’s that footage seen in the new promo.

The next scene from the teaser has Drogon flying into battle with the Dothraki. This is also from season seven, only the footage is flipped. Here’s the original Loot Train Attack moment, with Drogon flying east to west.Here’s how it looks in the reverse in the promo, along with an overhead shot of encampments outside a snowy Winterfell, which is also a season seven shot that has been flipped from the original.Quick movie idea: Bill Hader turns into a time traveling dragon.But the footage of Daenerys being greeted at Winterfell as “your Grace” by Sansa is all new, and is almost certainly from the same scene as the only other season eight footage released so far. A previous HBO promo showed Jon and Sansa hugging in Winterfell, likely after he returns at the start of the season.

Jon and Daenerys should arrive at Winterfell at the same time, since they left Dragonstone on the same boat (the ship where they slept together) to travel there. A confident Daenerys seems very excited and/or smug to hear Sansa’s verbal bending of the knee.
Sansa already knows Jon has given up his crown to serve Queen Daenerys. In the season seven finale “The Dragon and the Wolf,” a frustrated Sansa and an opportunistic Baelish talked about a letter she got from Jon.

“This is the way he is, the way he’s always been. He never asks for my opinion.”“I can’t believe he’d surrender the Northern crown without consulting you.”“This is his writing, his signature. He pledged to fight for Daenerys Targaryen. He bent the knee.” 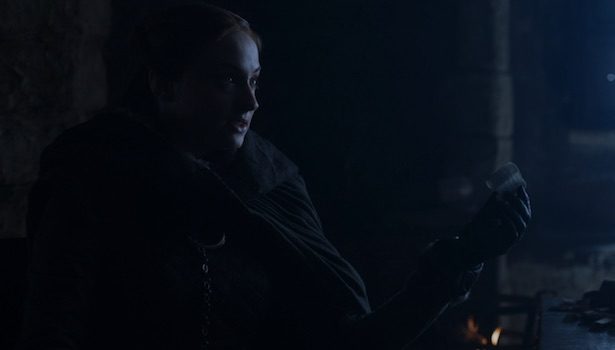 Baelish then pointed out Jon might want to marry the beautiful Mother of Dragons (this was before Jon and Daenerys went to bed together), and that their alliance would be hard to beat. Littlefinger then said Jon could be unnamed King in the North, another attempt to tear the Stark children apart. Since it didn’t work (RIP Baelish) and Sansa united with Arya, it’s not surprising to see Sansa will follow her brother Jon in serving Daenerys. What this new footage shows, though, is that she is still not happy about any of it, since she seems to give Winterfell to Daenerys through gritted teeth.Brienne definitely seems to be wary of the new arrangement. 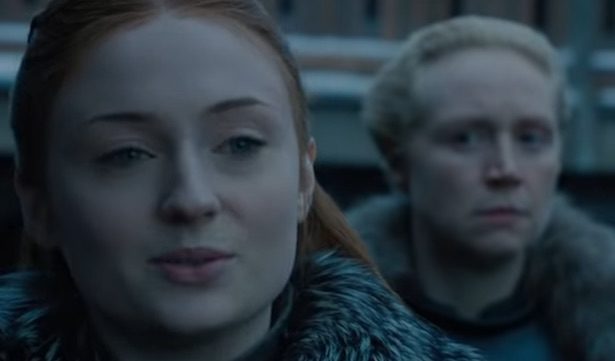 Brienne side-eye is the best.This footage also raises another interesting dynamic: Jorah’s return to the North. He was the heir to a great house, but fled when Ned Stark sentenced him to death for selling two poachers into slavery. How much respect will the Northern lords have for Daenerys when she is accompanied by a disgraced man who broke a serious law and ran away from his sentence? Will any of them try to carry out the order of their former Lord of Winterfell, Ned Stark? Will they refuse to listen to him or work with him? 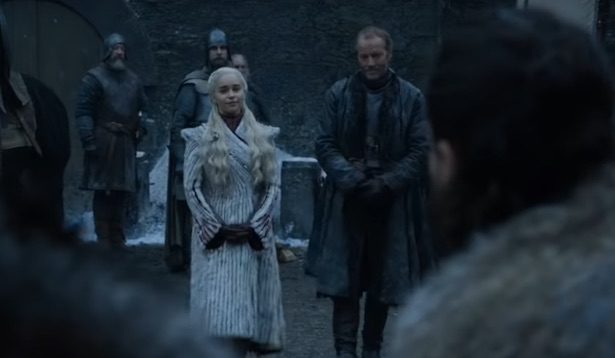 Since the Great War will likely be won or lost based on whether the living can work together, Sansa bending the knee to Queen Daenerys is a big step towards victory. Sansa far more than Jon can convince the lords of the North to put aside their enmity and unite.But if Sansa starts to think Jon did this out of romantic love (he originally bent the knee because Daenerys rescued them from the Frozen Lake), or that the North should rule themselves, it could cause major issues. And that’s before anyone learns Jon Snow is actually Aegon Targaryen. How much would that revelation make them question where Jon’s true loyalties actually lie and why?It might not have been a lot of new footage, but there sure is a lot going on here.