In This New GAME OF THRONES Game, You Swipe to Reign Over Westeros - Nerdist

In This New GAME OF THRONES Game, You Swipe to Reign Over Westeros

The final season of Game of Thrones may be months away, but thanks to Nerial, Devolver Digital, and HBO, you’ll be closer than ever to the Iron Throne.  Reigns: Game of Thrones, based on the best-selling Reigns app, puts Westeros within your reach as you rule the Seven Kingdoms with a swipe of your finger.

In Reigns: Game of Thrones, set for release this October on mobile and Steam, you’ll swipe the screen left or right to make decisions as the newly installed ruler of Westeros. Melisandre, the Red Woman, has been granted a vision of a possible future where one of your beloved characters sits on the Iron Throne, and their acts of mercy or madness are in your hands.

But who? Of course you can take your turn ruling the kingdoms with Cersei Lannister, Jon Snow, or Daenerys Targaryen, but the game also offers more thought-provoking options like Sansa Stark. We don’t want to spoil the others who get their chance at both the throne and positions like Hand of the King and Master of Whispers, but there are some seriously intriguing choices at your fingertips. 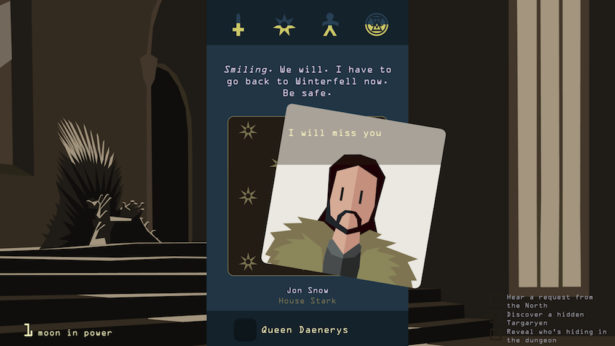 Each king or queen can decide how benevolent or ruthless they want to be. The dialogue and story choices give you the option to role-play as a mad queen Cersei or a sympathetic Jon Snow. But no matter how nice you are, there are conspirators and assassins just one wrong swipe away. And, don’t forget, winter is coming…

To make the illusion complete that you’re actually in Game of Thrones, the background music includes some of your favorite compositions from Ramin Djawadi, including the series theme and the unforgettable “ Light of the Seven.”

Reigns: Game of Thrones is planned for an October 2018 release on the App Store, Google Play, and Steam at a price of $3.99; you can pre-order the game now to make sure you don’t miss your chance to sit on the Iron Throne.

Who would you pick to rule Westeros? Tell us who and why in the comments.