Build a Campaign Using One Potion, A Sad Shadow, and Perfectly Sane Fanatic

The Deck of Many is a tool used to assist Game Masters in their role-playing campaigns. This week, we continue our three-part showcase to design random encounters based on a different deck. We’ve already done Druidcraft from the Animated Spell Deck, and we’ve done a Ghost from the Monsters deck, so it’s time we use some consumables with the Potion deck.

Consumables are some of the best uses for tabletop cards because of their transactional nature. Since they are temporary, using cards saves you the hassle of having to transcribe their benefits onto your sheet. So without further ado, our random draw for today is: Potion of Heroism, Cult Fanatic, and a Shadow. Since I was a big fan of Shadow Dancers back in D&D 3.5, I’ve decided to make the Cult Fanatic a villain and the Shadow a good creature for this encounter.

A sad shadow laments over his master’s fate in the sacrificial pit. 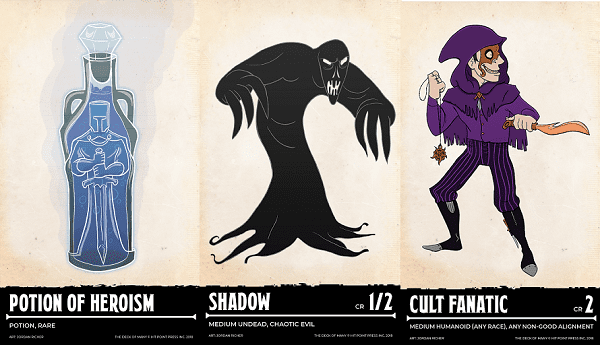 Shadow Dancers were performers, thieves, and general trouble makers that were often of the Chaotic Good alignment. As the main feature of their class, they could summon or create Shadows that shared their alignment. This is where our story begins today. Outside of Barovia, a Vistani Shadow Dancer has found herself taken hostage by a band of cultists who worship the Shadowfell. Using the Vistani’s inherent connection to Strahd, the cultists are attempting to tear expand Barovia’s fog and shred the worlds barrier to the Shadowfell.

Rather than an epic quest with massive build up, this is a quick call to vital action. A Shadow has found its way into a town with the party and keeps trying to convince any adventurer to drink a Potion of Heroism it’s located. Being incorporeal, undead, and mute make this act incredibly difficult. The Shadow relies on stage performance, acting, and dramatic flair to tell its tale but few in the town listen. Few, catch what’s at stake. What the party does when witnessing this odd event; a Shadow trying again-and-again while failing is important to the outcome. If they listen, agree to drink the potion, then off they go to save the world! The potion is a symbolic gesture, one the Shadow recognizes will save his master. If the party ignores this quest or slays the Shadow for the Potion, then the days go on like normal. A later… the sun rises, blackened and coated with shadow, and the Material Plane is fully eclipsed by the Shadowfell for a single day…or longer.

What’s your method for random encounters? Let us know in the comments below!

This post is sponsored by  The Deck of Many.

Featured Image by: The Deck of Many