Building a Random Encounter with a Centaur, Tribal Warrior, and Druidcraft - Nerdist

Building a Random Encounter with a Centaur, Tribal Warrior, and Druidcraft

The Deck of Many is a tool used to assist Game Masters in their role-playing campaigns. Last time, we covered a random encounter that could be generated from pulling cards from their decks. They’ve come a long way since their first Kickstarter campaign (re: Humblewood), and they’ve even got a solid Patreon page that is based off a per-creation donation.

Thanks to advances in SCIENCE they’ve actually animated frame looping spell cards. It’s based off spell cards that we will design our next random encounter!

Taking one card from the Monsters, Animated Spell, and NPC deck each, we are going to build a random encounter. To our luck today, we’ve drawn a Centaur, Tribal Warrior, and a Druidcraft. With a group of players ready and at the waiting, it’s now our job to improvise a sidequest on the fly. Since every story begins with a hook that can be summed up in a single sentence, here’s mine: 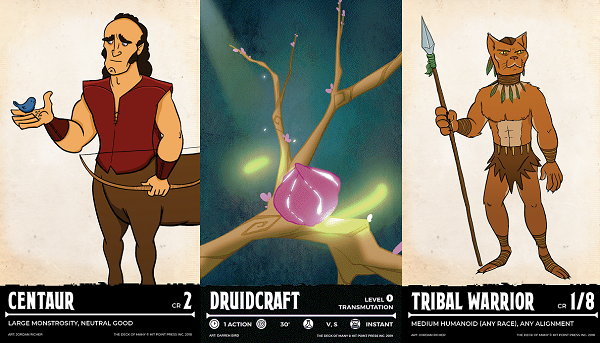 Spell components can be as important as you need them in your campaign. As a classic McGuffin, a spellcaster’s power can be reduced by getting granular by remembering every root or component required. For the party characters, it’s not memorable or that fun to always keep track of every monster giblet they need, but for NPC’s it’s the perfect showcase. A local wizarding academy that teaches first-year students has had their shipments of herbs completely dry up. They outsource the purchase of these herbs to a local tribal warrior Xaxti, who handles foraging and cultivation of the plants for a living.

Xaxti has a unique problem on his hands. Centaurs keep stealing the blasted herbs ahead of their schedule. They’re not combative and run away after being spotted, but every time Xaxti plants or locates more herbs, the Centaurs harvest them faster than him. The secret is Druidcraft. The Centaurs are racing into Xaxti’s camp and using Druidcraft to force the harvest early; steal the precious herbs, and then race off into the sunset to sell them elsewhere. Jerks.

The party can either ambush the Centaurs, try to reason with them, or even use Druidcraft themselves to one-up the crafty creatures. The Centaurs have every motivation of their own to keep Xaxti from growing, harvesting, or even finding these plants—they’ve got grand designs of selling the herbs back at double the price.

How would this encounter play out with your group? Let us know in the comments below!

This post is sponsored by The Deck of Many.

Featured Image by: The Deck of Many