Building a Random Encounter with a Ghost, Bandit, and Halberd - Nerdist

Building a Random Encounter with a Ghost, Bandit, and Halberd

The Deck of Many is a tool used to assist Game Masters in their role-playing campaigns. Filled with creative art and reference materials, the decks are used similar to other spell and reference cards; simply bring what you need to the table. At their face value, the cards are quick useful things for your party to reference when needed and saving valuable in-game tempo. 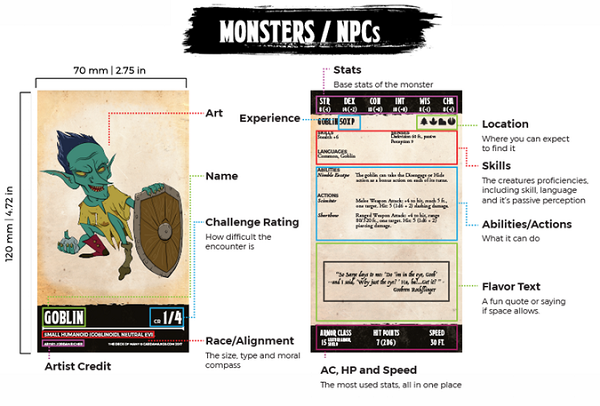 There is another fun use: shuffle them and design random encounters.

Taking one card from the Monsters, Weapons, and NPC deck each, we are going to build a random encounter. To our luck today, we’ve drawn a Ghost, Bandit, and a Halberd. With a group of players ready and at the waiting, it’s now our job to improvise a sidequest on the fly. Since every story begins with a hook that can be summed up in a single sentence, here’s mine:

An old bandit enemy comes to the party seeking forgiveness for his past deeds.

The Price of Redemption 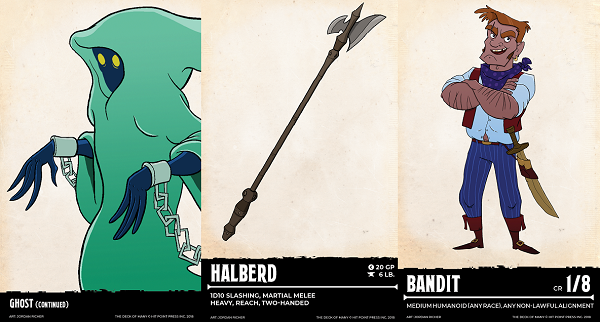 Adventuring parties put down their fair share of bandits. Like a pack of ravenous murder-hobos, some D&D groups only see bandits as the meat to grind up before the shiny loot and boss encounters. Using this premise, it is likely that every adventuring party has had a run-in with a brigand of sorts. Our Bandit for this encounter shall be named Valun, and unfortunately for him, he got his tail kicked by the party several levels ago. Valun has tried to reform his ways, but despite noble attempts at learning the skill of painting, a ghost of his old captain won’t let him rest. Every night, Valun is tormented by visions of the parties assault on them, and the brutality of which his comrades were slain. The captain demands Valun take up their orders signature weapon (a Halberd) and continue their crime spree so nobody will ever forget about them.

It’s taken Valun a while to track the party of PC’s down, but after many sleepless nights, Valun finds the group and grovels at their feet with the Halberd. They’ve changed his life and showed him mercy once before, but he can’t handle a ghost alone. The Captain has charged him with collecting the Halberds of their fallen members to form a ghostly brigade of bandits that wield spectral weapons. Can the party be bothered to set aside their current quest to help a Bandit before it’s too late? If the party ignores Valun on account of their current mission being too important, then he will eventually succumb and start robbing weapon merchants to build the spectral Bandit Brigade. If the party helps him, then they must wait until nightfall when the Ghost Captain manifests and slay the creature, setting Valun back on the path of a semi-righteous painter. Their reward? A Halberd. Not sure what they are going to do with that, but they did a good deed today.

How would this encounter play out with your group? Let us know in the comments below!

This post is sponsored by The Deck of Many.

Featured Image by:  The Deck of Many