In a world where modern technology is quickly outpacing certain aspects of sci-fi, it’s fascinating to see where the real world and the fantasy world overlap. With the proliferation of tech from smart phones, cyber warfare, 3-D printing and the ubiquitous presence of drones, our future is Cyberpunk AF.

Cyberpunk has a rich history on the tabletop as we’ve previously discussed, with R. Talsorian’s seminal and eponymous Cyberpunk RPG line being the gold standard for game design and setting. The genre has been well represented over the years, but for the past decade one of the sterling examples of how to keep the hallmarks of the style familiar-yet-topical is Gun Metal Games’ Interface Zero. Beginning life as part of the great spate of d20 OGL games that dominated the market in early 00’s, it has evolved to see itself become one of the iconic settings for Pinnacle’s Savage World game line, as well as being translated to the Fate system. And now, thanks to a successful Kickstarter, it’s coming to the powerhouse Pathfinder rule set! 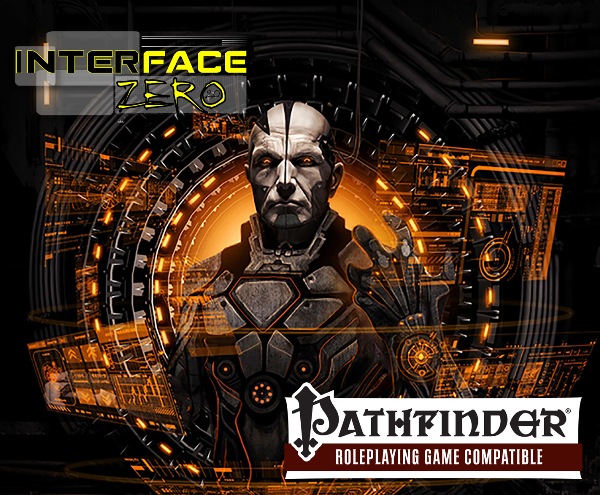 The world of IZ 2.0 has many of the familiar tropes that fans of the genre have come to expect: chrome plated street warriors battling it out over big scores, corporate intrigue, and so forth. Dig a little deeper and you’ll find interesting undercurrent of prescient political and philosophical thought; bio-engineered chimera, bodyhackers taking self-expression to the extreme, the “Internet of Everything,” and drones as far as the eye can see.

And while the omnipresent, malevolent megacorps are here, they are not the only big bad in the grim future presented in the game. There is also environmental disaster, threatening civil war in America, and a rogue A.I. bent on ending it all. EVERYTHING went wrong in the world, and it’s everyone’s fault. As game designer David Jarvis says in an incredibly thoughtful essay (and you really should read the full length version HERE):

Geek & Sundry got a sneak peek at the Pathfinder version currently rocking on Kickstarter (though if you’re curious the now outdated Beta Document is available for free at DriveThruRPG), and while we can’t give too much away, it’s INCREDIBLY promising. Fans of both the d20 stalwart and Interface Zero will find a lot of common ground. A great balance of action, a unique take on the 3.5 rules for character advancement and buffs, and with intriguing expanded rules (including hacking and psionics), this iteration of the game bring a ton to the table. A satisfying hybrid of form and function, indeed.


The Kickstarter campaign lasts until October 12th, and they are already on track to reach at least one of their stretch goals. As a fan of the genre, I would HIGHLY encourage any like-minded individuals to swing by and see what’s what.

Are you as excited as we are for this?! No? Well check out this amazing promo clip and get back to us!