From the Dawn of D&D to the Board Game Boom: One Man’s Thirty Years of Gaming at L.A.’s Strategicon - Nerdist

From the Dawn of D&D to the Board Game Boom: One Man’s Thirty Years of Gaming at L.A.’s Strategicon

Eric M. Aldrich has seen a lot of gaming on the tabletops of Los Angeles over the past three decades. Growing up in Long Beach during the 1970s, he began playing Dungeons & Dragons when he heard about a gaming convention called Orccon in Anaheim, California.

“I managed to convince my parents to let me go to this, since at that time I couldn’t drive,” he recalled of his gaming convention experience in 1981. “They drove me out there and I had a blast. I didn’t know a person there, but had a lot of fun and got a lot of my friends to go with me over the next few years.”

It was during his younger years when he discovered he had a knack for the administrative work that goes into running a convention. 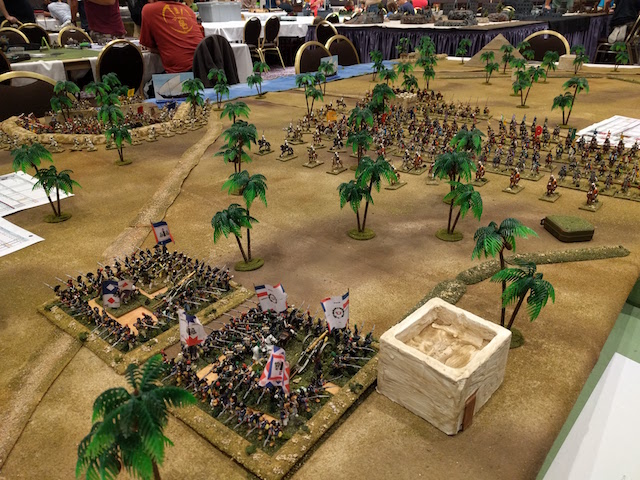 “Part of it was being a student and poor, so you try to cut your registration fee so you do volunteer work and get in free,” he said. “That’s how I met a lot of the guys that ran the show. I got taught the ropes by a few people because they thought that I was interested in stuff on the administrative end. I was also friends with two guys who were convention managers.”

His passion for gaming and knowledge of convention administration eventually led him to becoming the majority owner and convention manager of Strategicon, which hosts three conventions (Orccon, Gamex, and Gateway) during holiday weekends every year in Los Angeles.

This weekend the second convention of the year, Gamex, takes place at the LAX Hilton. In addition to offering gaming of all types, from miniatures and board games to card games and role-playing games, larger tournaments take place, such as the National Catan Qualifier and Agricola National Championship Qualifier.

Although Aldrich now spends Strategicon weekends making sure the convention runs smoothly, he recalled one of his earliest gaming convention memories: playing Nuclear War, a card-driven game that recently celebrated its 50th year of publication.

“A group of us were sitting there playing the game and after a while we said, “You know, I’m getting kind of hungry. What time is it? Oh, it’s three o’ clock. Ok, let’s get some lunch.”

Aldrich and his friends walked out into total darkness.

“It was three a.m.,” he laughed. “We’d been playing for 15 hours straight and didn’t even notice.”

While he might not take part in all-day games anymore, Aldrich does get to see the bigger picture at the convention: the trends and changing tastes of gamers throughout the years.

“Games evolve over the years. Right now we’re in the midst of the board game boom. Actually, I’d say we’re at the tail end of it. It’s still going strong, but there’s been an RPG renaissance,” he said. ]. “It’s cyclical. When I started, Dungeons & Dragons was huge; everyone was playing AD&D. It was the hottest ticket in town. War games were on their way out. Then, of course, there was Magic: The Gathering, which overwhelmed everybody. It caught everyone by surprise. For several years it just dominated.”

After interest in Magic peaked, miniatures gaming became popular, then the Settlers of Catan took over the gaming world during the mid-90s.

“That’s been going strong for a while. Certainly, during the last 10-15 years board gaming has been the biggest thing,” he said. “But none of the other stuff has gone away. Magic’s still out there, role-playing games are as big as they’ve ever been.

In addition to running Strategicon, Aldrich enjoys spending his time pursuing his other hobby: wine. “It’s a fun little hobby since something that’s been sitting on your shelf for 15 years is suddenly pretty good,” he said.

Looking back over his thirty years of involvement with the Strategicon events and over conventions, Aldrich reflects on what it tabletop gaming means to him.

“Sitting down, relaxing, having a good time and exercising the heck out of your brain in a rather unique way,” he said. “It teaches strategy, patience, and it lets you relax. It’s a good time.”

What are your favorite memories at gaming conventions? Tell us in the comments!


Ruel Gaviola is a writer and educator based in Southern California. He loves board games, books, cooking, traveling, date nights with his wife, and Star Wars. He reviews games and reports news for iSlaytheDragon.com and his name rhymes with Superman’s Kryptonian name. Follow him on Twitter.