It’s easy, in today’s world, to wring new meaning out of art made in the past. We’re watching closely, and noticing some eerie parallels between those stories and our reality. Shows like Lost—which deals with quarantine, illness, and isolation— feel more salient in the COVID-19 era. Star Trek dreams of a better tomorrow. The Good Place reminds us that people are worth fighting for. But there’s another show on my mind lately. The science-fiction series Fringe, and most notably its episode “Entrada,” which recently celebrated its tenth anniversary.

Full-series spoilers ahead for Fringe

There’s a lot about Fringe that makes me think of our current garbage year. The series was fairly straight sci-fi in its first season, operating as a monster-of-the-week X-Files update that found the FBI investigating strange goings on. But it all built to a stellar reveal in the season one finale: that scientists discovered an alternate reality version of our own. A place where copies of ourselves lived totally separate, sometimes vastly different, lives. And in crossing over to that world, we scarred it irreparably. The alternate world is not a rosy place, but a complicated one. There are tears in the ozone, food shortages, cataclysmic events that result in amber freeze zones and mass death. But there are good things, too; among the ruckus, people seem a little happier there. (At least of the characters we meet.) They’ve learned to find joy in dire times.

Fringe follows FBI agent Olivia Dunham, who learns about this parallel world thanks to a scientist named William Bell (Leonard Nimoy). His former partner, Walter Bishop (John Noble), went mad after the death of his young son and traveled to the other world to kidnap his replica. This event is what caused the tears in their universe, which begin to occur in our world as well. Walter raises this replica as his son Peter (Joshua Jackson), but never heals from his mistake. Another event, which causes the death of his assistant, sends him to the madhouse. It’s only with Olivia’s help that he is released and becomes an adviser to the FBI. 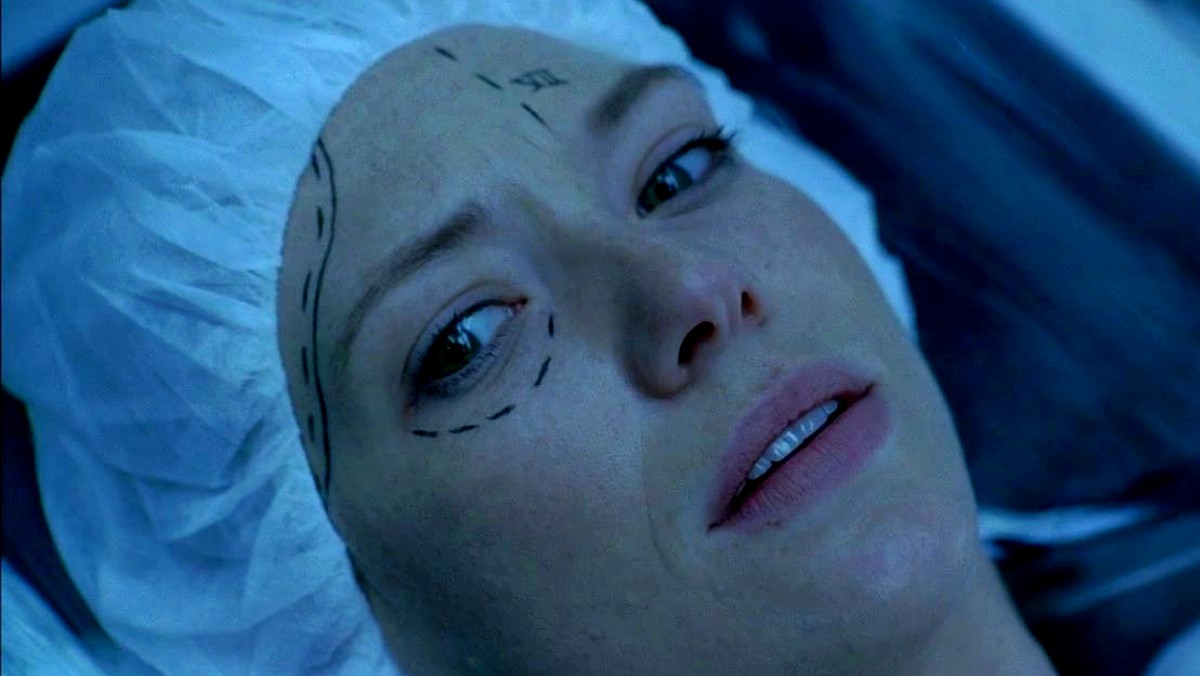 A lot of stuff happens because of this partnership. Olivia eventually falls in love with Peter, but can’t tell him that he’s from the other side. When the team crosses over together, Olivia is kidnapped and placed in isolation, and her own other-world replica pretends to be her in our world. “ Entrada” is the episode when they switch back. It begins with Peter—who has fallen in love with this alternate-reality Olivia, believing her to be the real one—discovering Olivia is the duplicate. She escapes, the FBI tracks her down, and despite their best efforts, she escapes back to her world. Meanwhile, our Olivia is about to die over there; scientists are going to cut her open and study her brain. She hatches an escape plan and also finds a way to cross back over, turning up in an immersion tank in Walter’s lab.

Our Olivia’s escape is harrowing, but also heartbreaking. It’s a relief to find her back home, but she realizes almost immediately that she’s stepped into the shadow of another woman. Alt-Olivia was lighter, happier; she was able to woo Peter when our Olivia couldn’t. Our Olivia is a haunted character: she bore tremendous childhood trauma due to experimentation, abusive stepfathers, and the death of her mother. Meanwhile, Alt-Olivia was raised by her mother, who is still alive, and avoided most of those thornier life events. When Olivia steps back into her reality, she finds it fundamentally altered because this happier version of herself walked in her shoes. Slept in her bed. Wore her clothes. Found partnership with the man our Olivia loves, but struggled to find her way to.

I think about “Entrada” a lot these days as I struggle to run towards the version of myself I was before this hell year stomped all over my progress. Like Olivia, I feel haunted in some unfixable way. I know that’s not true, and I know so much of life is what we make of it. But it’s compelling to see Olivia fight for herself… only to realize she has another hurdle of self-acceptance on the other side.

Isn’t that what life feels like today? Fighting for normalcy, and realizing it doesn’t really exist? Not in the same way it once did. And it might never again. But the beautiful thing about Fringe is that Olivia never stops fighting. She is brazenly human. A person who falters and fails and trips over her own messes. But a person who sets aside her personal woes to save the world, over and over. And in doing so, she finds her way to Peter eventually. She mends her turmoil with Alt-Olivia and the two become friends. She realizes that her traumas aren’t debilitating, but are tools that make her stronger—and therefore more capable when it comes to healing the universes.

“Entrada” is one small piece of Fringe‘s overall dizzying and beautiful puzzle. It’s a miraculous show. One that, like so many things, feels even more important now. “Entrada” makes me want to fight, even if there’s a roadblock on the other side. Because that’s what Olivia Dunham would do to survive in today’s world. And that’s what I’ll do, too.