I can distinctly recall when I first saw the 1979 version of Dracula starring Frank Langella as the titular count. It was about 9 a.m. on a Thursday and I had to get to class soon, but I was hooked. I’d seen the 1930s film before and never found Béla Lugosi particularly charming. I’d even seen the Francis Ford Coppola version with Gary Oldman, which is probably the most explicit version of the infamous story. 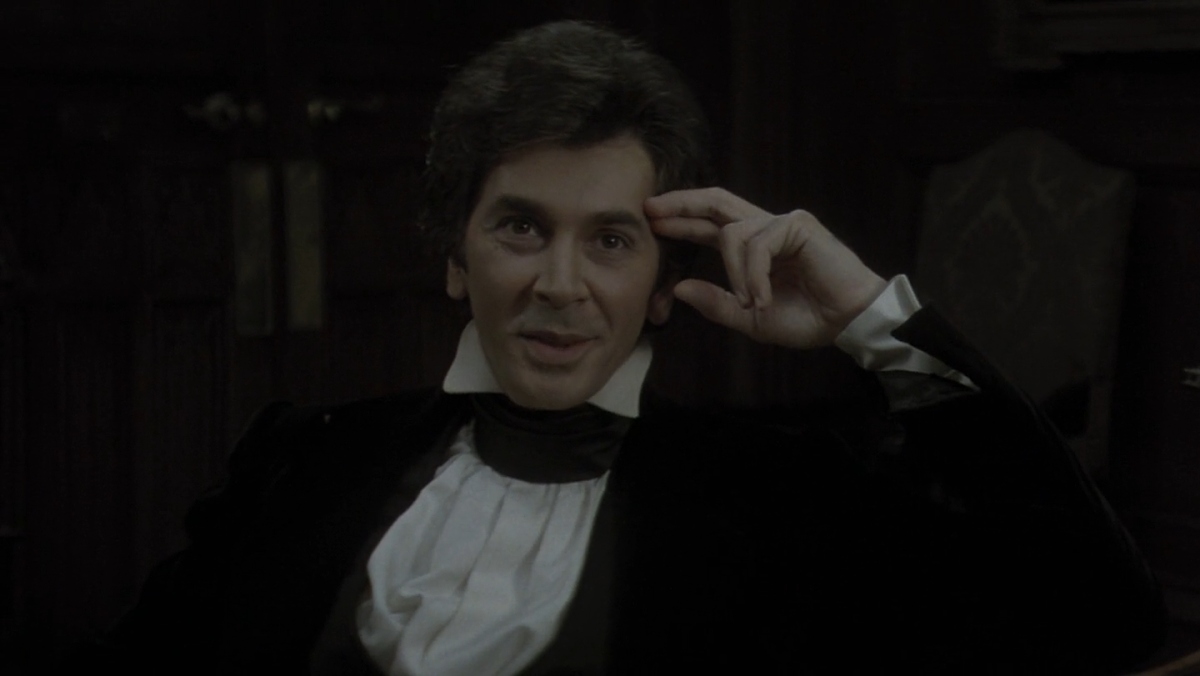 This adaptation veers a bit from Bram Stoker’s 1897 original novel; it moves the action to 1913 and emphasizes romance over the horror elements. However, basic plot points remain. The film begins on a dark and stormy night as Dracula’s coffin arrives by boat to his dilapidated and gothic AF seaside estate. We see that everyone on the boat has been gruesomely murdered.

Dracula makes a full appearance onscreen at a party that night. As he enters through a pair of French doors, he is all confidence and grace. Like everyone else, he is wearing a tuxedo, but unlike the rest of the party, his outfit is all velvet. Even the vest is velvet, with a lapel made of satin. His jacket features exquisite long sleeves and peaked shoulders. Balmain, eat your heart out. As he enters the room, he whips his velvet coat off in one fluid movement while heading directly towards Lucy.

Langella has incredibly piercing eyes, so bright and soulful. When he speaks to those around him, his focus is solely on each person at a time, giving them a penetrating gaze. Langella also speaks with a deep, velvety smooth voice. This man is dapper as all hell.

His chemistry with Nelligan’s Lucy is fiery from their first scene together, though everyone at the party appears hypnotized by his charm. Mina, of course, is literally under a spell with Dracula claiming he can hypnotize her fainting spells away. Later that evening Lucy claims she likes to be frightened, while she and Dracula share sly smiles.

For those not familiar with this story, Lucy’s fiancé Jonathan (Trevor Eve) is a wet mop who is always a bit clingy. Lucy does her best to put up with him. Meanwhile, Dracula, the voyeur, is always watching their intimate interactions to respond accordingly.

Dracula‘s two major seduction scenes play out very differently. After spying on Lucy and Jonathan, Dracula comes for the hypnotized Mina. We see him creep down the wall to her window, tracing it with his slim finger in order to remove the glass and gain access.

The second seduction sequence occurs in two parts. After Mina’s death, all the men begin to blame the mysterious new neighbor and forbid Lucy from seeing him. This predictably has the opposite effect. Lucy attends a private dinner at Dracula’s new digs and, my friends, it is perfect. There are at least 125 candles (yes, I counted!) and there is a giant stone bat watching over the two star-crossed lovers as they dine at a long and luxurious table. (The Phantom is shaking.)

After their meal, the two listen to the howling of wolves (the children of the night!) and the sexual tension is as thick as the fog. Badham frames it as though Dracula is going to bite Lucy’s neck, but he instead nibbles on her earlobe before they share a passionate kiss.

As Lucy returns home, the thought of Dracula lingers on her mind while she dresses for bed. Much like his earlier seduction of Mina, Dracula appears at the French doors ready to ravish Lucy. His costume, however, looks more like a typical romance novel cover.

Dracula’s crossbody cotton shirt creates a V-neck, exposing much of his chest, although his velvet cloak is still elegantly draped over his shoulders. As he embraces Lucy he tells her, “You will be flesh of my flesh, blood of my blood.”

Dracula lifts Lucy on the bed, showering her with kisses and pillow talk. Badham shoots the scene so that their entire length-wise bodies fill the frame, then slowly pulls in closer as the heat rises, until their faces fill up the whole screen. Lucy matches Dracula’s sly smile as he leans in to bite her. The lighting switches from natural to a red and black silhouette.

Until this moment, the score for the film had mostly been mellow. But as Dracula and Lucy embrace, it became a cacophony of woodwinds, brass, and percussion. The score, a John Williams composition, swells before coming to a climax just as the silhouette of Lucy flings her arms back in ecstasy. It cuts back to regular lighting as their hands entwine, then Dracula pierces his own chest so Lucy can feed.