Four Ways To Add Depth To Your D&D Dice Rolls

The game part of “role-playing game” primarily comes when dice hit the table. The story the players and the Dungeon Master are telling has come to the point where both sides want to see what happens. Whether the roll succeeds or fails, the story should continue to be interesting. This binary result works most of the time but some tables want to have more dynamic results when the dice are thrown. Here are some of our favorite ways to spice things up beyond “I did the thing!” and “I didn’t do the thing!” while playing D&D.

Officially, Dungeons & Dragons Fifth Edition only has critical successes on attack rolls which allow for double damage on attacks. Natural 20s and natural 1s are automatic successes and failures, respectively but that’s it. In some editions of the game, these rolls lead to critical successes and failures where the character succeeds or fails at a might higher level. The 20 on a Persuade check doesn’t just convince the guard you’re meant to be there, the guard escorts you to the evil Duke directly! The 1 on the Stealth check doesn’t just mean you’re caught, it means you boot got stuck in a crack in the wall and you are at a disadvantage until you can pull free. A great way to ease this idea into a game is to let the players take control when one of these rolls come up. Dungeon Masters can still guide the player if needed to make sure that they don’t push the narrative off the rails, but most players should have a sense of what a great success or terrible failure should feel like. This trust goes both ways when the DM rolls a 20 or 1 one for their character if these rules are in play.

Success at a Cost

Rolling a 1 is heartbreaking but sometimes rolling a 14 when you need a 15 hurts just a little bit more. Players want to succeed and do cool things with their characters, so moments like these are made for negotiating a success at a cost. The Dungeon Master and player have a brief negotiation over what the player might take as a consequence in exchange for succeeding. This happens all the time in narratives; the hero doesn’t realize they are hurt worse than they initially thought or at some point later the noble will realize the statue is a forgery. Success at a cost in D&D is particularly useful in using up or breaking equipment to put pressure on parties looking to rush through a dungeon. Should they head back in town for thieves tools? Should the paladin explore other rooms to find a shield she can use? 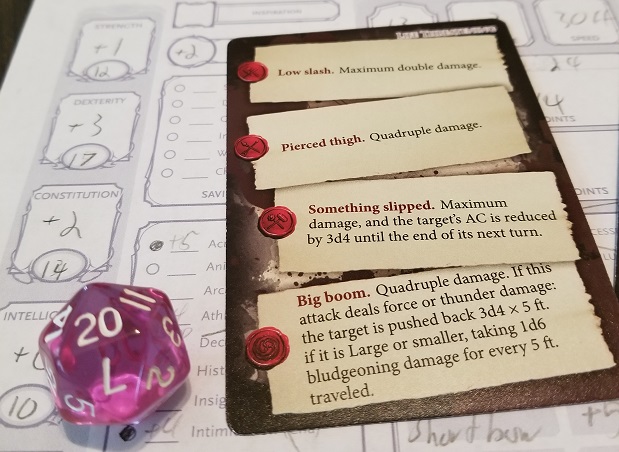 The base rules for Fifth Edition kept things pretty clean and simple. Players roll double their damage dice on a natural 20 roll. There’s a long-standing tradition of getting into the nitty gritty details of a critical hit. Past editions have had charts on which to roll detailing what body parts get smashed, severed or sliced off. A product like Nord Games Critical Hit Deck for Players adds this element to 5e by not only offering alternate conditions for the player’s vicious blow to attach to a bad guy but also altering the damage based on the type the weapon inflicts. GMs can also pick up their own deck to really expand the options. The cards make a critical roll feel like a slow-motion cutscene from a console RPG. 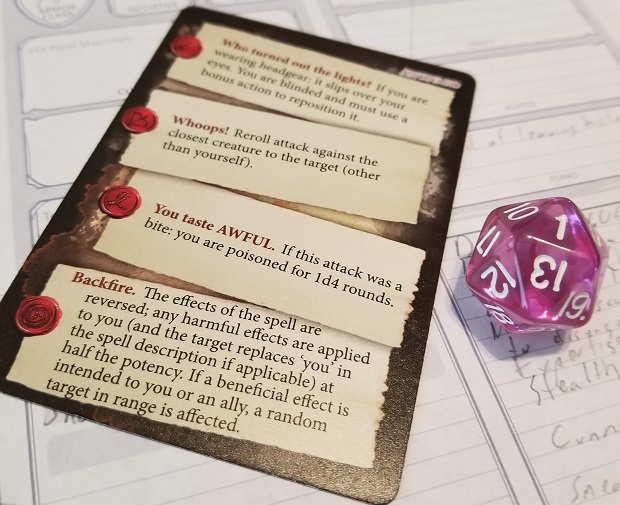 They’ve also got a deck for critical failures for those tables that want to make a natural 1 a special occasion.

Natural 20s are great, but what about those poor 19s? There’s a lot of room to explore between the success of hitting a difficulty class and the big success of a natural 20. A high enough roll could still offer a minor effect, like a 5-foot push back or gaining hit points equal to the attacker’s Con modifier as a rush of adrenaline hits from the solid hit. The options could expand as the character grows, too. Minor effects might occur whenever the character succeeds in an attack roll on a number equal to or higher than 20-their proficiency bonus.

Spice up your D&D

Rob Wieland is an author, game designer (Star Wars RPG, Firefly RPG, Camelot Trigger) and professional nerd. who  occasionally tweets and livestreams RPGs with the  Theatre of the Mind Players while his meat body resides in scenic Milwaukee, WI.