Pack O Game is a series of games, each no bigger than a pack of gum, with some small similarities (three-letter names, 30 cards) and a wild amount of variety. Unlike most games, you can easily carry these in your pocket. You can probably see how enabling these games would be to a game addict such as myself. But you might ask, “How much gameplay can really fit in such a small game?” Well, a lot! The creator of these games has plans for at least twenty games, and they’re ready to roll out the next set of games in the series.

I recently had the opportunity to play four from the new set and I’ve got to tell you, I like them all as much as my favorites from the original pack.

In RUM, up to four pirates are plundering a wrecked ship of all its rum and trying to collect the largest sets possible. To start, set out the eight score cards and give each player a bottle card. Then place three bottles face up to make the beach and scatter the rest to form the shipwreck.

On your turn, you either play cards or draw. To play, discard bottles of a specific color from your hand and take the trophy of that color. You earn points based on how many bottles you played, but you must play more bottles than were last scored for that color.

If the parrot card is revealed, you must discard and the score on the black card is increased. When the black card reaches eight, the game ends and the highest score wins. 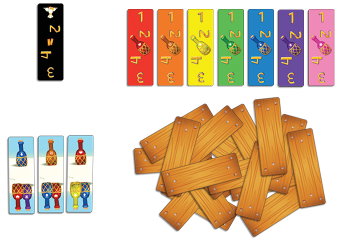 RUM uses a neat mechanism to keep track of scores. When the score on a card needs to go up, simply rotate the card counterclockwise. If the score on the card is four, flip the card over.

This minimalist approach to cramming as much into each card as possible is something I love about Pack O Game. In many games, you might use eight-sided dice or tiny cubes for scoring, but Pack O Game are anything but typical.

Get ready for a flashback to grade school, because it’s time to form teams and play sports in GYM! That’s right, GYM simulates choosing other kids to play on your sports team and seeing how well they actually play together. The game blends a variety of mechanics that you don’t often see together, such as card drafting and team play, but it does it so perfectly that you won’t realize how much depth the game has until you’ve played it.

The first half of GYM is spent picking kids. Choose kids based on how strong they are at the sports you think will be played. Each kid is good at one or two sports, and this is reflected on their card with numbers ranging from one to four.

Some kids are also bullies. If a bully is picked, the player can vote on one or two sports that they would like to compete in. Only the four sports with the most votes will be played.

Once all kids are chosen, take turns assigning them to sports and using special abilities. This is another moment where GYM is really interesting. The special abilities allow you to move and swap kids around to unravel your opponent’s strategy, but there are also coaches that move around when bullies are played and can block kids from being moved.

Once all kids have been assigned to sports, the game ends. Add up the number on each kid that matches the sport they are participating in. Whichever team has the highest total score is the winner. The other team gets wedgies.

In SOW, players grow flowers from seeds and pick them from their garden, all in an effort to make the most beautiful bouquet ever. This was easily the most mentally taxing game from the new Pack O Game. It takes the classic game of Mancala and jacks it up on steroids by adding colors, a secret objective, a watering can, wind, and a dirty gopher that eats your flowers!

Each player has a wheelbarrow in front of them which hides your secret favorite color. Randomly place two seed cards on each of the twelve sections of the play area. Put the windmill on one diagonal, and the gopher on the opposite. 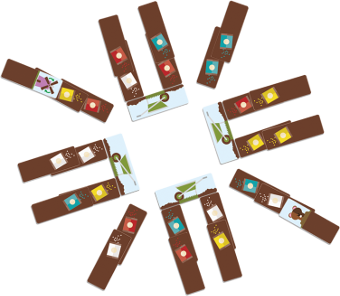 If the windmill and gopher end up in the same row, choose one of the two and flip it over. These cards allow you to change the direction that cards are spread and remove flowers from the game.

ORC is a game of conquest between two warring tribes of orcs fighting over the poor native villages that lie between them. Once you set up the cards/board, on your turn, you’ll play a card at one of the six tribes. Pick a color on the card you played to become the attacking force. That color must be different from the tribe you are attacking and you must always play the same color at that location on subsequent turns. Then, draw cards from the face down piles. If you placed two orcs, draw one card. If you placed one orc, draw two.

When a draw pile becomes empty, a fight happens. Whoever has the most orcs at the tribe next to the empty pile wins. Discard all cards placed at that location and use one of the cards to indicate who won the fight. 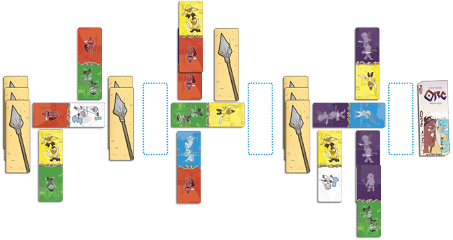 The balancing act of choosing your battles and conserving forces is awesome. You have to conquer tribes, but you also have to do it with as few cards as possible. And if your opponent sees you conserving cards, they’re going to stomp on you. Who knew commanding an army of orcs required such finesse?

Pretty impressive for uber-tiny games, right? What are some of your favorite small games that you like to take around with you?