Four Fantasy-Themed Games You Can Play at Your Next Party

Whether you need to break the ice or you host a regular game night, having a group of games on hand to fit a theme keeps the night rolling. I’ve pulled together four of my favorite fantasy themed games to get your party underway. 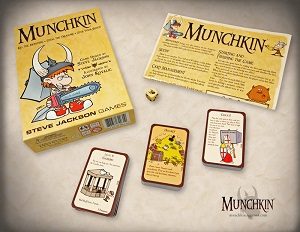 Kick in the door, kill the monster, and stab your buddy in the back. Grab the loot and be the first one to level 10. It’s every man for himself in this parody of role-playing games. You start off as a level 1 human with no class (all puns intended) and must steal and cheat your way to level ten. You do this by playing classes, races, and equipment to boost your level so you can kill the monsters before they eat you. With a ton of different skins, there is sure to be a Munchkin that fits your group. 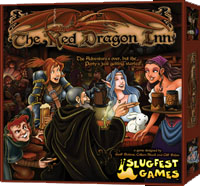 You’ve finished the dungeon and now your pockets are full of loot. What’s a band of adventurers to do? Drink and gamble, of course! In this game, you take on the persona of an adventurer and buy your friends drinks in the hopes of being the last man standing at the end of the night. Each person gets their own deck of cards with actions suited to the character. Drink, gamble, and tell the tales of your epic adventures. Just be warned, the inn will kick you out if you run out of money or get too drunk. The expansions add new adventurers and expand the game play to more than four players. 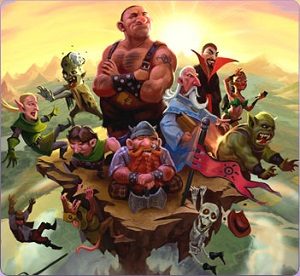 You lead a fantasy race hell bent on taking over as much of the tiny world as you can. The one problem is that everyone else is doing the same thing. You pick your race with its special power and take over territories and overtake weaker races. If you’ve spread yourself too thin, you can let your race go into decline and pick a new one. The person with the most coins at the end of the game wins. The really cool thing about this is there are different boards depending on the number of players and the combinations of races and powers make each game different. 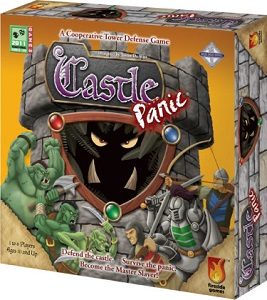 If cooperative play is more your style, Castle Panic pits all the players against the hordes of orc and goblins coming out of the woods. All you have to do is keep one of your castle’s towers intact to win. To do so, you trade cards with your fellow players to adapt a strategy to slay the monsters before they overtake your defenses. It’s super easy at the beginning, but more monsters appear at the end of each player’s turn. Win together or lose together, but Don’t Panic. The monsters can sense your fear.

If you haven’t had enough fantasy board games, watch Ivan and Becca play Ethnos on Game the Game this Friday at 4 PM Pacific on our Twitch channel.

Do you have a favorite fantasy board game? Tell us in comments!