Four Advanced Board Games With Classic Mechanics You Need To Play

Tabletop games are awesome. But you know that already. You’ve probably bought some Provinces in Dominion and tapped lands in Magic: The Gathering. These are great games and well worth playing. But, what happens when you’re ready to expand beyond your first few titles? You’ll find some of your favorite mechanics below, along with some games you probably haven’t heard of to go along. Some of these are a little more complicated than than your typical board game, but we know you can handle this. 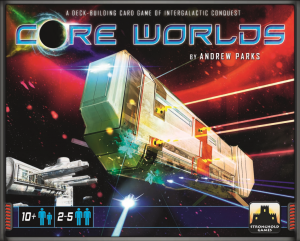 Dominion is a great deck building game. You buy cards and put them into your discard, then reshuffle and play them out again. With every card you bring to your deck, you’ll construct an engine to score you more points to take over the world (or galaxy). And if you really like that idea, then maybe it’s time you took a look at Core Worlds.

In this game, players are roving bands of marauders from the outer galaxy, slowly making their way to the galactic core and conquering all along the way. In addition to deck-building, players manage actions and energy each turn (essentially the game’s currency). They buy better armaments and warriors, play them out, and then use them to conquer various worlds. Those worlds, in turn, provide more energy for even greater conquests.

Each player gets a unique character in their deck, but everyone starts out with nothing more than a few weak ground and space troops. But as the game goes on, your empire expands as you conquer increasingly difficult planets. The game does a good job of pacing the cards so that the enemies get stronger roughly in proportion to you.

When cards are laid out for purchase, it isn’t static piles that are the same all game. Instead, you get a set of cards depending on the number of players and any given card will only stay out for two rounds. Unwanted cards disappear, but you’ll need to grab the cards you want before they vanish. And there is much greater competition for the cards since there will not be enough to go around. 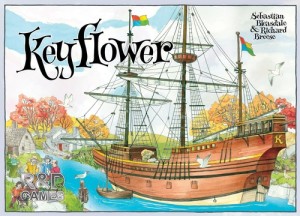 Maybe you’ve played For Sale or Revolution! These games ask, “How much is that worth to you?” as you try to outbid, out bluff, or just get a better deal on what’s out on the table. If you want to up your auction game, then you should take a look at Keyflower.

Players auction off various tiles and use three colors of workers to do it: red, yellow, and blue. The hitch is that as soon as someone bids a color, that color is locked in. If you bid one blue worker, it doesn’t matter how many reds I have, I have to bid in blue to compete and you have to put down one more worker than the previous bid.

Tiles give you resources to help make tiles better or simply win the game. You can choose to use the title for the resource or start bidding on the tile to take it for your own. Either way, the color of the worker first put down on the tile determines to color you’ll use in bidding or activating the tile. Just know that you won’t be getting any works that you use for winning bids though you’ll get back all the workers you use to activate a tile.

This creates phenomenal tension in the game. On the one hand, you want to bid on a tile early so you can ensure that you’re competitive in a color you have. If someone puts a red down and you have no red, you aren’t going to get that tile. But if you place early, it lets other players see the lay of the land and figure out how to outbid you. They know how much to hold back and can plan around it. Which means, you want to bid late so that you can surprise them later. By bidding late, after they’ve used up most of their currency, they are less able to get it back from you. But by bidding late, you risk losing the tile completely if someone else puts the wrong color to start the bidding.

Argh! Such great tension and excitement. Plus there are multitudes of strategies and feints, building up and building out. It’s a great title that really expands what an auction game can be. 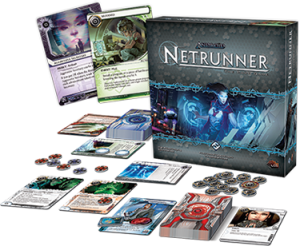 The big gorilla in this department is Magic: the Gathering. Sure there are other titles, but even the most popular don’t come near to touching its reach. Still, there are games in this format that are crazy good – better, even, than the leviathan.

Case in point: Android: Netrunner.  Originally designed by Richard Garfield, the same guy behind Magic, this game is wholly asymmetric with one player becoming the villainous Corporation trying to advance its various agendas behind secure servers. The other is the Runner whose sole goal is to infiltrate the systems of the Corp and expose those agendas for fun and profit.

Netrunner has it all: bluffing, excitement, uncertainty, luck, and no small amount of skill. Players have to know both halves of the game to build a competent deck. A Runner needs to get around the Corp’s defenses, and the Corp needs to neutralize the Runner’s tricks while getting their evil servers online. The deck building opportunities are vast, but you’ll need to take some time to figure it out since both players manage the board in very different ways. Plus as an LCG, there are no blind boosters or “rares” to worry about. You can basically make the deck you want to play without having to scavenge for that one card you need for your deck. 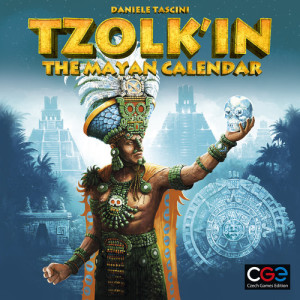 Then there’s the big euro mechanism: worker placement. Agricola may be the most popular, but numerous titles use it. It’s all about using your pieces to get what you need and block the other players. And if you’re ready to expand the concept, you really need to take a look at Tzolk’in: the Mayan Calendar.

In Tzolk’in, players represent Mayan tribes who gather resources, construct buildings, gain favor with the gods, and even nab a crystal skull or two. And they do this by placing their workers on specialized gears. Rather than take an action immediately, the players actually leave them there. And every turn, the gears move one tick. As they move, the worker is placed in front of increasingly desirable actions.

So in addition to placing workers, there’s a timing element as well. You not only want to place your people in the right spots, but you want to do so in a way that lets them take the actions at the right time and in the right order. What follows is this fantastic gestalt where you are placing your workers not just in a physical location, but essentially a temporal one as well.

Got any other suggestions for something a little more advanced? Tell us about it in the comments.

Everything We Know About THE BOYS Season 3