Forget The Prime Directive, In "The Captain is Dead" You Just Need To Survive - Nerdist

Forget The Prime Directive, In “The Captain is Dead” You Just Need To Survive

You joined a starship for the adventure. Seeking out new life, navigating asteroid fields, seducing a sexy alien or two. You know, the usual space adventure stuff. But now the Captain is dead, aliens are destroying the ship’s systems, gravity has doubled for some reason, and you’re starting to think that this expedition isn’t exactly what you signed on for. In AEG’s aptly named The Captain is Dead, all of this will happen and more. What you need to do to escape with your lives is hobble the ship together with duct tape and prayers and hyper jump to safety, but that is much easier said than done.

There’s a great history of cooperative games that The Captain is Dead finds itself a part of. Stand out examples include Flash Point, where you’re fighting fires and saving families; Pandemic, where you’re fighting diseases and saving humanity; and Eldritch Horror, where you’re fighting ancient entities with unpronounceable names and saving the whole planet. What these games all have in common is that you play as unique characters working together to fix the myriad problems that arise during the game. These problems occur faster than you can solve them, so you have to prioritize. You won’t put out every fire, far from it. In fact, these games are often notoriously difficult to win. But through careful planning, shrewd decision making, and a little luck, you might just save the day. 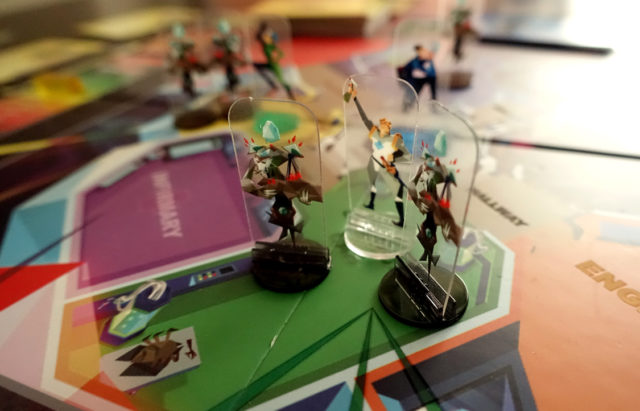 The Captain is Dead presents a classic, pulp science fiction take on the “oh god, oh god, we’re all going to die” formula. Each player is a different member of the crew on a Federation-style spaceship that has run afoul of some hostile aliens who are presently blasting your ship into dust. Your job will be to frantically run around fixing systems, fighting off the aliens, researching dangerous anomalies, and repairing the Jump Core so you can escape and win the game. If too many aliens board your ship or if your shields drop below zero, well I imagine the outcome is self-explanatory. 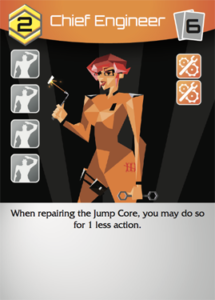 combination of actions and skills. Actions are things like moving around and fighting aliens, and each character has four or five actions per turn. Skills are represented by a hand of cards that each have one of four skill types: science, tactical, engineering, and command. To use or fix a system, you usually have to spend an action (or two or three) and some skill cards, depending on which system you’re utilizing. Some characters are naturally competent in certain fields and will get a discount whenever using a specific skill.

Danger comes in the form of alerts. Every turn you’ll draw a new alert from the deck and it’ll make your job a little harder. A system might break down, one or more characters might get injured, an anomaly might appear, or any number of other horrible events might happen. And this is where I have to say that The Captain is Dead is not for everyone.

See, the alerts in this game have an increasing difficulty. They start with yellow, then orange, then red. The problem is that even the yellow alerts can be punishingly difficult to deal with if they’re drawn in a certain order. There is a way to prevent some alerts from affecting the ship, but it’s hard enough to pull off that you might decide it makes more sense to just let them happen. Now, the fact that The Captain has a high difficulty doesn’t bother me. I’ll gladly beat my head against the wall if I feel like the game is giving me a chance. The thing is, if you slip up for even one turn, you can easily find yourself in a real no-win scenario.

The biggest obstacle is the anomaly cards, which are mercifully removed in a two player game. These are alerts with ongoing effects that need to be researched in order to remove them. Unfortunately researching them requires four science skill cards, and if you don’t have a science-y character on your team, that’s a difficult task even under ideal circumstances. On top of that, the anomalies themselves make it harder to complete said task. And when you have two or even three affecting you at the same time, forget about it. You might as well beam the keys to the ship right into the aliens’ hands. They’ll take it from here. 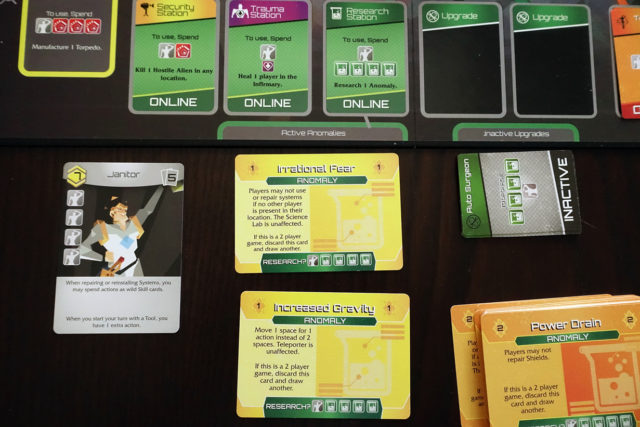 I don’t want you to think that I only have criticisms though, because this box actually has a lot to love in it. First off, the theming is spot on. You really do feel like you’re in a pulpy sci-fi show that’s gone off the rails. Each game is filled with moments that are tense or funny, or sometimes both. And on top of that, this game has a lot of character. Literally, there are 18 different characters to choose from. Also metaphorically, because while the art style might not match everyone’s taste, I love that they went with such a bold design. In a market filled with cookie cutter science fiction, these images really stand out.

Personally, I think The Captain is Dead has a slight problem with escalation. For me, the game gets a little too hard a little too fast, and if that’s going to put you off, you might want to check out the other games I mentioned (well, maybe not Eldritch. That game is patently unfair sometimes.) But if you love the theme, you love cooperative games, and you get excited at the thought of an occasionally brutal difficulty curve, then The Captain is Dead might just be the perfect game for you.

What’s your favorite board game with Dark-Souls level difficulty? Let us know in the comments!