Op-Ed: Forget the Movie, the SCOTT PILGRIM Series is a Must-Read - Nerdist

Op-Ed: Forget the Movie, the SCOTT PILGRIM Series is a Must-Read

So, here’s the deal. Edgar Wright is a talented filmmaker, there’s no question. I’ve enjoyed many of his movies, in fact Shaun of the Dead might even be up there in my top favorite comedies. But for me, his adaptation of Brian Lee O’Malley’s Scott Pilgrim series, Scott Pilgrim vs. The World, missed the mark because it all happened too fast, and I’m going to explain myself momentarily. Feel free to disagree, challenge my thoughts, agree wholeheartedly; anything that you so desire.

Scott Pilgrim is a very special comic book character, because of how sensitive he is to the world around him. For a wide-eyed, 23-year-old boy who shares an apartment, and a bed, with his gay best friend Wallace, Scott treats his situation and his roommate with genuine respect. In Scott Pilgrim’s Precious Little Life (the first book), we’re introduced to Scott as he hangs his coat up on the coat pin, matter-of-factly discusses the trials and tribulations of having a 17-year-old girlfriend called Knives, and doesn’t attack Wallace when he claims, albeit jokingly, “you’re totally my bitch forever, Scott.” He’s a gentle soul who met Knives on the bus as she dropped her school books, which makes him instantly lovable. And more than that, he’s honest–even when it would be easier to just lie about his young girlfriend to save face, he tells his friends and band mates, “we almost held hands, but then she got embarrassed.”

Now, while Michael Cera was appropriately curious in the film version, we didn’t get enough of these endearingly tender, quiet moments where Scott’s character, which is unique for a man that age, shines through (I want to call him a boy so badly, but he’s a sweet young man). These early scenes are where the audience should fall hard for him. I’ve no doubt that it’s incredibly difficult to condense six books into one film, but the fact that the books take place over a year and the film takes place over two weeks is a weakness, and I lost Scott early in the film when I should have been rooting for him.

O’Malley’s dialogue in the books is incredibly natural, there are no airs or graces and nothing feels forced. When Scott’s sister calls to tease him about dating Knives, and Scott tells her that Knives goes to a Catholic school and wears a uniform, there’s never a moment when we think that Scott is taking advantage of Knives, or treating her with anything other than the best of intentions. When she asks if they’ve, you know, done it, Scott replies, “no, no, no, no, no. God, no. We haven’t even held hands. I think she hugged me once.”

The unfortunate thing is that much of this clever dialogue was included in the film, but it didn’t matter. It didn’t carry any weight like it does in the book. The gloss, the fancy editing and the general feeling of rushing to get to the seven evil ex-boyfriends [editor’s note: seven evil exes] took over, making any emotionally revealing dialogue lack importance. The whole thing became a blink-and-you-miss-it gimmick, which I don’t like admitting because, as I said, I enjoy so much of Edgar Wright’s work. And the ‘gimmick’ is fun and everything, but the story of Scott Pilgrim is so much more than what revolves around Ramona Flowers. The people around him are what make his world keep spinning, and that includes his sister, and even his parents who pass judgement on his job status (or lack thereof) all the way from Europe.

There’s a very important life lesson to be learned from the Scott Pilgrim series, and that’s not to be afraid of getting your ass royally kicked. In the book, it’s literal, as Scott must defeat Ramona’s evil exes to continue dating her, but it can also be metaphorical. Scott Pilgrim is a lover, not a fighter, and yet he shows us that to get what you want, sometimes you have to ‘throw a punch’ or two, in whatever form that may take. 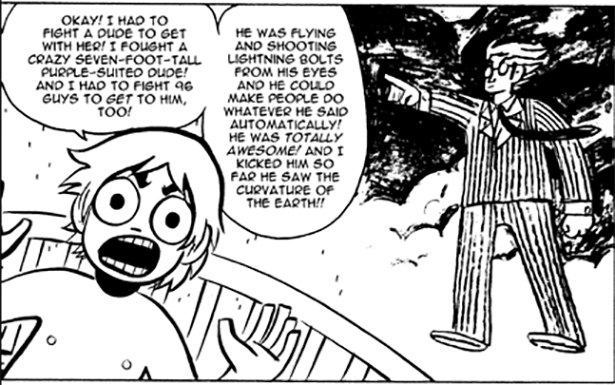 I’m not convinced that the film gives the same message, and that’s a shame. We experience every event in such quick succession that Scott comes off as more of an aggressive character who seeks out drama and fights, rather than them literally landing in his lap, and him having to anxiously navigate the path to victory. To add to that, the film glorifies the fights as centerpieces, whereby the real centerpieces of the Scott Pilgrim story are the interactions Scott has with Wallace, his sister, his bandmates, and all the various women in his life; namely Knives, Kim, Ramona, and his ex-girlfriend, Envy. The tagline for the film was “An epic of epic epicness,” and that was the problem; the film didn’t need to be so giant in proportion.

There are numerous flashy, hilarious films like Scott Pilgrim vs. The World, but really, no other comic books like the Scott Pilgrim series. Scott is a protagonist with a style all his own, and he’s not afraid to give his whole self, all of the time. This is as unusual for a comic book character as it is a real adult person, making him tremendously memorable.

Please, do yourself a favor and read Scott Pilgrim: The Complete Series. I’m confident you’ll be hooked, still thinking about darling Scott years and years from now. 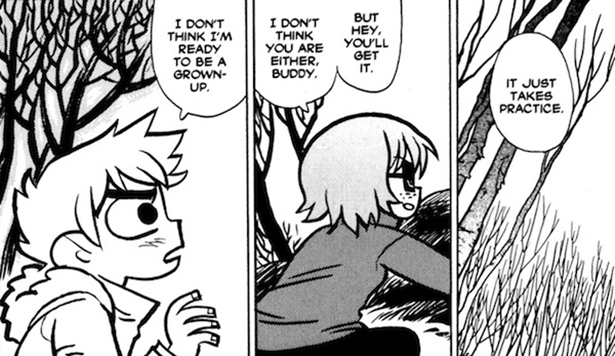