Forge A Legendary Blade With SWORDCRAFTERS

Wherever there’s a legendary story, there’s a legendary blade. King Arthur had Excalibur. Lord of the Rings had Andruil, Glamdring, and Sting. The Jedi Knights had their lightsabers. Each of these weapons cut into our imaginations and made any kid with a yardstick or cardboard poster tube into a hero in their backyard.

The creation of these fantastic items are often stories on their own, but thanks to designer Adam Rehberg the experience is also now a board game. Swordcrafters by Adam’s Apple Games pits up to five players against each other in a competition to create the best magical sword to replace the one broken by the king in battle. We took this game into our forge and returned with a few impressions.

The mechanics of Swordcrafters are very simple: Sixteen tiles are laid out on the table and each player takes turns slicing the tiles into different smaller and smaller sections.

Once everybody’s made a cut, the table takes turns selecting the tiles to build into their sword. One player gets one less tile to put into their sword but gets a tile that makes them first player next round. After five rounds of building the sword, each one is scored in three areas; length, quality (based on unbroken tiles of the same color on a side) and magic abilities selected at the beginning of the game usually requiring a combination of colors throughout the sword.

Putting together the pieces of the sword offers a surprising challenge to hit some of these goals. The sword must be built from the hilt up and filling all four sides to keep a color streak unbroken takes a little bit of strategy and luck when it comes time to select a slice of tiles. 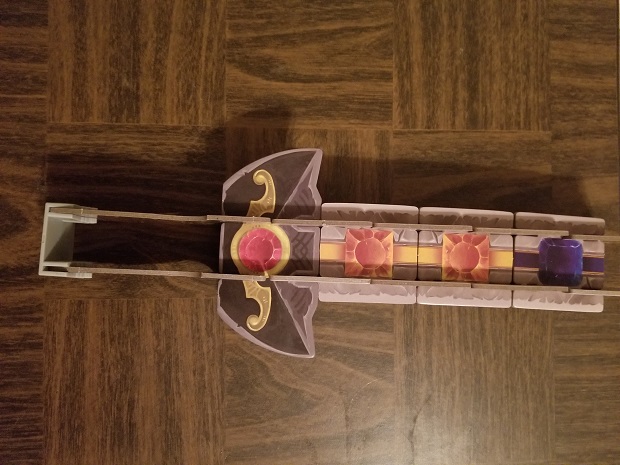 It’s been a banner year for board games entering the 3D space. Swordcrafters leaps off the table by allowing the players to craft their sword as they play, turning tiles on the table into an actual sword to hold. The tiles are made out of a sturdy cardboard, which admittedly requires a game or two to adjust how rough players can be putting their sword together.

We’d love to see a plastic second edition but we also realize that would be far more expensive to make. Once the pieces are together there is a definite heft to the model. We wouldn’t run off to the local LARP to wallop anyone with it, but the pieces fit together well enough that the swords can withstand some test swings during their construction (and after the game is over). 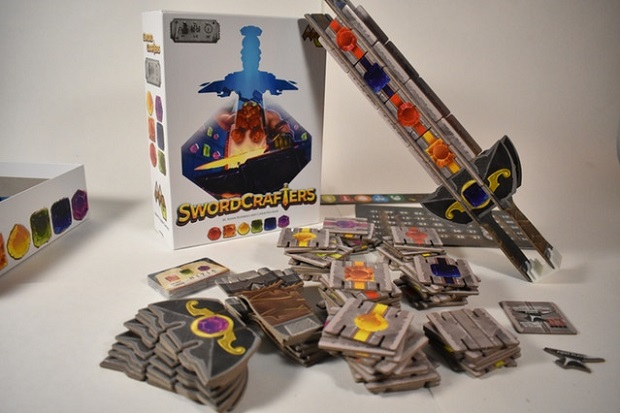 Swordcrafters is a light game that takes 30 minutes or so but still requires a bit of thinking to win. It’s a great selection to break out before a D&D game while people are arriving or at a game day to draw players to the table. Who knows? The Dungeon Master might get inspired and include one of the blades created in the game in the night’s adventure!

What’s your favorite legendary blade? Tell us in the comments!