STAR WARS: The Ins and Outs of Becoming a Force Ghost - Nerdist

History of Star Wars is our series where we take a close look at the galaxy far, far away and examine important organizations, locations, and theories that may play into what’s ahead in the sequel trilogy and standalone movies or explain what’s already happened.

At the end of The Last Jedi, Luke Skywalker gave his all to project himself across the stars from Ahch-To to Crait to fight Kylo Ren. Exerting that tremendous amount of power drained him, and he passed peacefully and became one with the Force. In a way, he transcended death. That means Luke could (hopefully) return as a Force ghost, a.k.a. Force spirit, in Episode IX. But how did he learn to do it? What does it mean to become a Force ghost? Let’s discuss what we know.

Who can become a Force ghost?

To become a Force spirit, you must be a believer in the light side. Only that kind of relationship with the Force, wielding it from a selfless and peaceful place, will allow one to make the transition. We first saw the concept in A New Hope. When Darth Vader killed Obi-Wan Kenobi, he disappeared, leaving only his ragged Jedi robes behind. His continued presence was revealed when he first spoke to Luke during the attack on the Death Star. Years later in The Empire Strikes Back, Obi-Wan appeared as a hazy-looking spirit, a physical manifestation of himself. He and Yoda both learned how to become Force spirits from Qui-Gon Jinn.

Qui-Gon was the first Jedi to unlock the path to becoming one with the Force. He was killed by Darth Maul before his studies were complete, so for a time, he could only return as a disembodied voice. But after Anakin’s fall to the dark side, Qui-Gon pushed himself to become corporeal, which took most of a decade (mentioned in From a Certain Point of View). He kept learning about the Force after death, and he studied how to fully emerge as more than a voice because he didn’t want Obi-Wan to be completely alone during his years on Tatooine. Obi-Wan would commune with Qui-Gon regularly; he talked with his former master on the day he confronted Darth Vader.

In addition to Qui-Gon, Obi-Wan, and Yoda, Anakin Skywalker (not Darth Vader) also became a Force spirit. Since he turned back to the light side before his death, he was eligible.

The role of the living and cosmic Force

Since the living Force flows into the cosmic Force, it makes it possible to transition from one into the other upon death. Qui-Gon learned about the mystery from the Force Priestesses. These beings appeared in the final episodes of Star Wars: The Clone Wars. They embody the living and cosmic Forces and represent different emotions: Anger, Joy, Sadness, Confusion, and Serenity. They’re kind of a collective that can be one being or multiple beings. Qui-Gon guided Yoda to the Priestesses so Yoda could follow in his footsteps and be able to manifest his consciousness after death.

How Yoda became a Force ghost

The Clone Wars episodes “Voices,” “Destiny,” and “Sacrifice” detailed Yoda’s journey to learn how to become a Force spirit. The Priestesses gave Yoda a series of tests. He had to conquer his hubris (one of the real villains in the Star Wars universe), he has to demonstrate he can carry the burden of pain and not try to run away from it, and he must face his fears. When Yoda passes his trials, Qui-Gon continues to guide his training.

Though the hurdles Yoda confronted were likely personalized to him, the general process is applicable to others. No two paths to achieving the level of enlightenment that allows one to exist beyond death are the same. On the day of Obi-Wan’s death, Qui-Gon explained to him that, “[It’s] a matter of finding center, of calming one’s soul and giving one’s self over completely to the Force. Some Jedi choose to transition between life and death in that way.” Obi-Wan could have applied that insight to get past the hurdle of death, and then continued to learn more—in the original trilogy, he went from only a voice to a transparent Force ghost to almost corporeal. 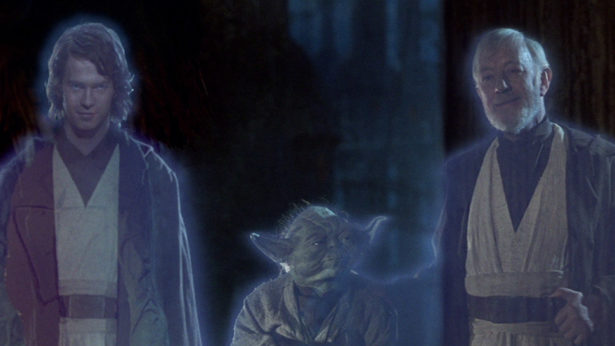 I don’t have an explanation for how Anakin knew what to do, unless his former Jedi Masters communed with him in his final moments, but it’s not a stretch to believe the Force ghost posse would have talked to Luke about the process before Luke closed himself off from the Force. I can’t imagine Luke wasn’t in touch with them as he built his temple and tried to continue the Jedi Order. It’s simple to picture Skywalker asking his dad or the others, “So, how did this whole spirit thing happen?”

Do you think we’ll see a Luke Force spirit in Episode IX? Share your thoughts in the comments.