Last year’s  Waterdeep Dragon Heist was an excellent city-based adventure for Fifth Edition. Many players followed it up with the brilliant Dungeons of the Mad Mage, but some groups wanted to find something to change up from heading into the Yawning Portal over and over again. Looking around outside of the official books, Kobold Press once again comes to the rescue with its new release,  Courts of the Shadow Fey. The adventure offers a switch up from Mad Mage’s dungeon crawls with an adventure full of intrigue fit for a crew that’s now made themselves players in Waterdeep after taking down a horde of gold. Here’s what we love about this adventure for characters from 7th to 10th level.

From Zobeck With Love

The central plot of Courts of the Shadow Fey centers on a long forgotten pact between the ruling house of the city and the Shadow Fey that was broken. The Fey starts to slowly return to the city as they make their way to reclaim it and pull it into their realm. Only the PCs can make their way to the shadow realm, insert themselves in the intrigues of the fey and convince the leader to renounce his claim on the city. 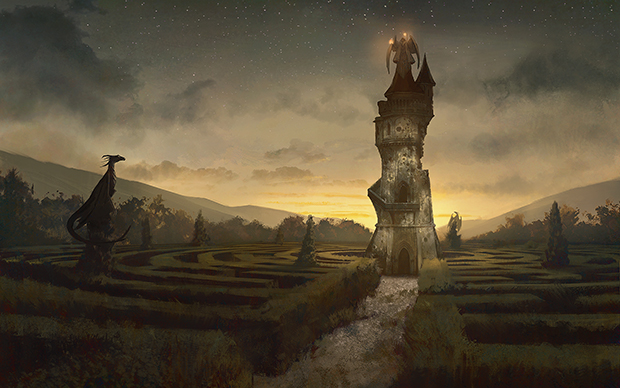 As written, the book is set in the city of Zobeck that’s a part of Kobold Press’s Midgard campaign setting. It doesn’t take much to change the city from Zobeck to Waterdeep for fans of the Forgotten Realms setting. It doesn’t take long for the players to be completely whisked away into the realm of the Shadow Fey, which could just as easily be called the Shadowfell. The point is that all those people, places and things that players fell in love with in the run-up to pulling off the heist are now in danger. So why can’t the players just hire their own adventurers to save the day?

It’s A Problem That Can’t Be Solved With Money

The end of Waterdeep Dragon Heist leaves characters fairly flush with cash. There’s a gap of a level or two between the two adventure paths, but the players are still likely to have thousands of gold pieces from their successful job. The Shadow Fey don’t care about money. They live in a world where they can create flowers from diamonds and impossible weapons from magical crystal. If the heroes want to save their city, which is where their big hoard of gold is, they’ll have to fight the shadow fey on their own terms.

A Matter of Reputation

The way to solve this problem is by earning a reputation in court. That means doing favors for the faerie lords which means jumping headfirst into the type of danger that Dungeons & Dragons players have come to expect. The adventure comes with some great plot hooks and adventures on its own, but it also gives an opportunity to slot in dungeons from other sources (like, say, Dungeons of the Mad Mage) to let the players gain reputation points. Once they’ve earned the reputation, they can get an audience with the king and…well, the rest might be spoilers.

Fight For Honor Or For Love

Another way to earn reputation is to take a faerie lover. This is about as dangerous for players as checking for traps with their face, but it also opens up some excellent opportunities for roleplaying and drama. Often times, suitors duel for the right to romance a faerie noble and the book comes with exciting rules for duels that make things dramatic without taking over too much of a session. The real challenge, of course, is what happens after the affair runs cold…

Courts of the Shadow Fey is due out in this month for 5th Edition. Whether the table has played its Fourth Edition or Pathfinder versions or everyone is new, it offers a unique story that contains all sorts of danger, drama and strangeness.

A review copy was provided by the publisher.

Rob Wieland is an author, game designer (Star Wars RPG, Firefly RPG, Camelot Trigger) and professional nerd. who  occasionally tweets and livestreams RPGs with the  Theatre of the Mind Players while his meat body is resides in scenic Milwaukee, WI.