The Lasting Impact of IN LIVING COLOR's Fly Girls - Nerdist

The Lasting Impact of IN LIVING COLOR’s Fly Girls

In Living Color debuted at an optimal time. It was mere months into the 1990s, a decade that would prove to be pivotal for hip-hop music. The artform had been around for a while by that point; however, it had yet to become the commercial and global powerhouse it is today. Keenen Ivory Wayans’ sketch comedy/variety TV show aided in catapulting hip-hop to new heights. The performers were prominent rappers at the time like Queen Latifah, Heavy D & the Boyz (who did the show’s theme song), and more. A key part of the relationship between the series and hip-hop culture was The Fly Girls, the show’s dance group.

The group’s members were quite diverse with many of them being Black and/or Latina, including members like choreographer Laurieann Gibson and, of course, Jennifer Lopez. Gibson and Lopez, along with Dancing with the Stars judge Carrie Ann Inaba, went on to have lucrative careers after their television dance days.

The collective provided the intrinsic link between dance and rap music, punctuating the show’s opening, closing, commercial breaks, and sometimes musical performances with the hottest dance moves to dope songs. The Fly Girls became a fan favorite; many people would tune into their brief segments with the same enthusiasm as they had for the show’s skits. Looking back, the group is more than just a slice of entertainment history, representing women entrenched in early-to-mid ’90s hip-hop culture. In many ways, The Fly Girls made their own lasting impact on pop culture.

First, one must understand the definition of a fly girl. The concept of being “fly” predates and coincides with The Fly Girls’ existence, as evidenced in songs like Boogie Boys’ “A Fly Girl” (1985), Grandmaster Flash & The Furious Five’s “Fly Girl” (1988), and LL Cool J’s “Around the Way Girl” later in 1990.

These songs celebrate bold, trendsetting, and beautiful women, specifically those from predominately Black (and other diverse) neighborhoods. They would rock box braids, fingerwaves, or a short haircut, and colorful nails, Kangol hats, and large hoop earrings. Their ability to effortlessly pair a high-dollar fashion item with inexpensive clothing or craft an original look from thin air was unmatched.

These fly girls and women weren’t afraid to speak their minds, using their street smarts to suss out situations. And, of course, fly girls couldn’t resist dancing to hip-hop jams. They were the standard, the ideal companion for any fresh dude; their less cool counterparts wanted to be them and everyone else coveted them. The latter often came to the point of crossing the line between adoration and objectification, a continual issue in hip-hop music today. So, it makes sense that In Living Color would dub their dance crew The Fly Girls.

The Fashion and Dance Escapades of The Fly Girls

The Fly Girls brought this bold fashion energy and aura to In Living Color, rocking biker shorts, oversized men’s jackets, neon colored clothing, bamboo earrings, high waisted pants, combat boots, and chokers. It was a combination of feminine and sexy clothing with traditional masculine attire much in the vein of some women rappers, most notably Salt-N-Pepa. The group, who appeared on In Living Color, undoubtedly played a part in the crafting the dance crew’s aesthetics.

They were already well-known for wearing leather bomber jackets and chains like their male rap counterparts. But Salt-N-Pepa would combine the look with bamboo earrings, form-fitting clothing, and trendsetting short haircuts. “High fashion” and others appropriated the “fly girl” look for profit/clout after initially deeming it “ghetto.” But In Living Color’s authentic connection with hip-hip culture made The Fly Girls a celebratory salute to the ladies.

It’s easy to style anyone in trendy clothing, but not everyone could emulate hip-hop dances. Moves like The Butterfly, The Running Man, and The Prep took rhythm and finesse to pull off. The Fly Girls’ choreographer throughout the majority of their run was none other than Rosie Perez. In fact, her In Living Color work led to three Emmy nominations.

Perez was already tapped into street dance culture, known for her unrestrained and aggressive dance style. She taught her skills to the dancers, many of whom were technical dancers that didn’t know hip-hop moves. Interestingly, Perez admitted to Elle magazine that she learned how to construct routines through Viva Las Vegas; the primary character Rusty Martin (Ann-Margaret) is a white, carefree dancer. This is a clever combination of white suburban culture with her own Nuyorican and hip-hop infused roots. 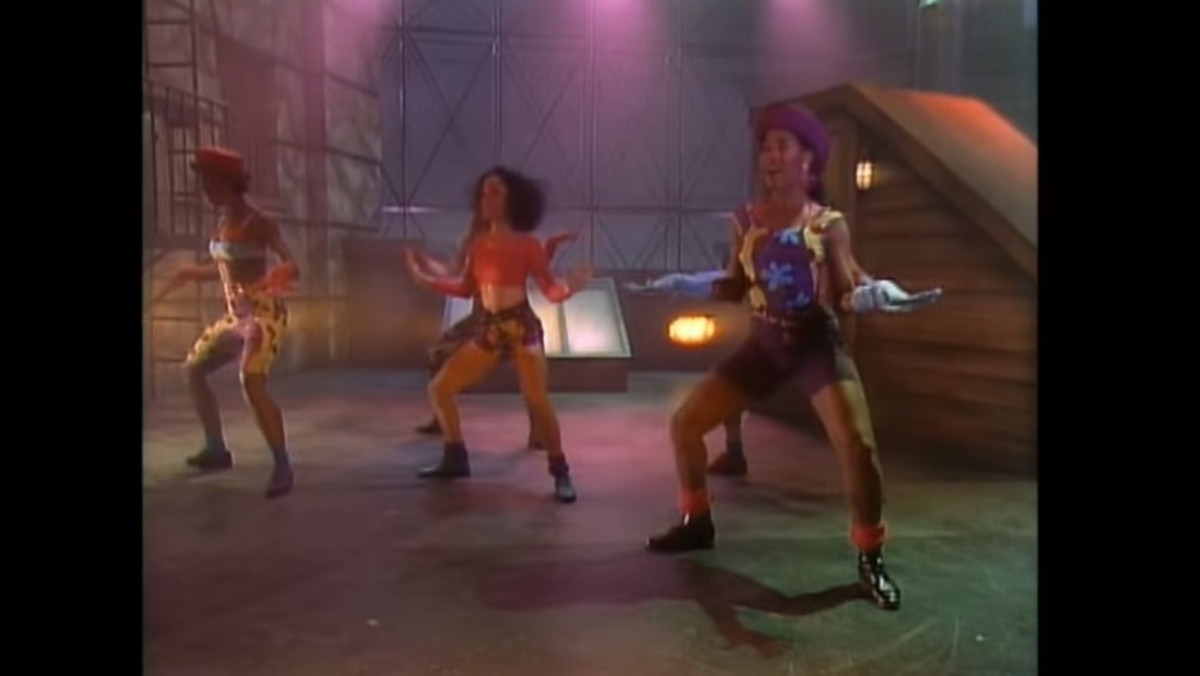 The group’s prominence has had an undeniable impact on culture that continues to resonate today. Their aesthetics and dance moves set a dress code standard for ’90s girls and women of all backgrounds. And their choreography style reflects throughout the decades with countless videos. Songs like  “Real Love,” “U Can’t Touch This, “Promise,” “Crush on You,” and “Finesse,” among others, featured visuals with women doing high-energy dance moves.

Books like Omar Tyree’s Flyy Girl (1993) and Ashely Woodfolk’s Flyy Girls series center on the perspective of Black communities and culture through the eyes of women protagonists. Queen Latifah gave her own take on a “fly girl” from her perspective; she’s someone who is sexy, confident, feminist, and commands respect from everyone. She would know because even though her personal style is different, her persona has screamed “fly girl” since the ’80s.

Groups like The Fly Girl Collective and Fly Girl Dance Studio continue to honor women who are fly in their own right, not only aesthetically but on the inside too. And, of course, one of the best ways to know if you’ve made an impact on the mainstream is if you are mentioned in The Simpsons. Moe teaches a class showing off the right moves to react to “a gangsta dissin’ ya fly girl.” It’s incredibly silly and high-key offensive but shows how the word “fly girl” became a well-known phrase.

Many Gen Z kids rock color block clothing, large earrings, or many other ’90s fly girl styles. It makes you thankful that YouTube exists to preserve this dance group’s legacy and fashion impact.

Were The Fly Girls the originators of women’s hip-hop fashion or dance? Absolutely not. But their visibility on TV provided an affirming platform to lots of women and girls, especially Black ones. It further confirmed to them that their culture, hair, and style were amazing. They still set a standard of what it means to be talented, cool, and straight up fly.