And lo, as fast as PAX has sped upon us, so too has it gone away. But that’s okay! We had an awesome time on the show floor and saw loads and loads of excellent games. Games that challenged us, games that took us to wild new worlds, and games that made us party hard. Down in indie town, where small teams crank away at realizing their visions, we saw some games that blew us away with their offerings. Here are some of our favorites.

Witching Hour Studios’ Masquerada: Song and Shadows showed off a short demo of the combat system and character interactions during PAX, and our playthrough on the show floor was like a graceful dive into its Renaissance-inspired world. It’s an isometric RPG where you take the role of Inspettore Cicero, leading a small party of heroes to investigate a kidnapping set against a city set to explode as conflict grows between the powerful mask-wearing upper class and the rest of society. Our demo saw Cicero and his party investigating a library, looking for a woman inside and stumbling onto a group of hostage-takers seeking mysterious books detailing the history of a lost civilization.

Masquerada’s biggest appeal is both the sense of mystery injected into the heart of its drama, and the sense of exploration it leads players on in order to seek out clues for that mystery. In between the various fights, Cicero and his companions argued about the nature of their quest, trading theories and betraying the fact that their trust for each other was just as uncertain as their knowledge of who their true enemy was. With both other magic-users and the mystical fey standing in their way, Cicero and his companions will have a lot on their plate when Masquerada lands in 2016.

Okay on this one we may be biased because we’re writers around here, but seriously, The Westport Independent is like nothing we’ve seen before. From the same people who bought you the border inspector simulator Papers Please, The Westside Independent casts you as a newspaper editor in a semi-totalitarian state, being issued news briefs to report on, altering them to tell one version or another of the story, and then assigning them to reporters of varying political views. You need to accomplish all of this before shipping the paper out and while trying to keep your doors open in wake of the impending Government cultural restrictions that dictate you say nothing bad about the regime.

Like Papers Please, The Westport Independent frames its political choices in a sort of open-ideology window for you, the player, to place your values on the game. While the government’s central policy hilariously violates everything about the First Amendment in the United States, it didn’t automatically mean you’re supposed to view the government as bad and completely totalitarian—-the rebel groups in the game commit many acts of violence that you’re due to report on. As an editor, you’re striving for a balance that keeps the paper open and fits with your view of what the people should know. Sometimes, that will be an easy task, like reporting on the Government’s Library closures. Other times, you may be forced in a bind when they threaten to punish your reporters and you’re staring at a story of a police officer who beat a civilian.

The King’s Bird might be the best Superman game we’ve ever played. Well, okay, it’s a lot more than “a Superman game,” but after free falling down a long tunnel, pulling up, and rapidly gliding toward the finish line, it’s definitely a game that understands flight. The King’s Bird comes from Serenity Forge, and its developers told us at the show they were definitely looking to make a momentum-based platforming game for both talented speedsters and gentle newcomers looking to glide and meditate like they might in Journey. Its unique form of play is using the controller to push down into a surface, be it a ground, a wall, or a ceiling as you make contact, and getting a speed boost off that that you can turn into a long jump or a graceful flight. Our demo at PAX only showed off a tutorial and a challenge level, but The King’s Bird also promises to be a story-driven game as well. No release date yet on this one, but keep an eye on the horizon for your chance to take flight. 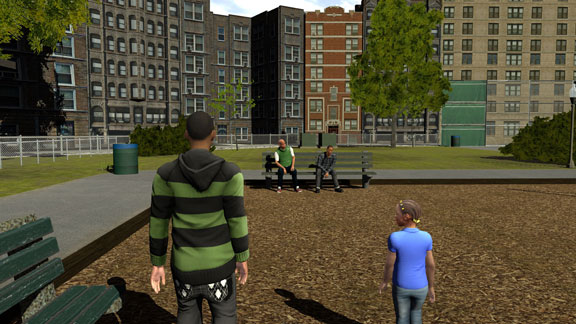 We Are Chicago has to be one of the most specifically ambitious games at PAX. It’s a story-focused game set in the south side of Chicago, following a young teenager named Aaron who’s about to graduate from high school. Written by Tony Thorton, a local writer from the Chicago neighborhoods that inspired the game, We Are Chicago has none of the escapist underpinnings most of the other games at PAX Prime possess—there’s no big quest, no sudden boon of powers, just families and neighbors interacting with each other and trying to survive in a layered system meant to work against them. The developers have partnered with two Chicago nonprofits to develop the game, and will donate 50% of the game’s profits to them. Sitting back on a couch, weaving our way through Aaron’s life, we were happy to see that the same tools we use to tell stories about con artists and superheroes can be used to capture ordinary people as well.