So let’s hit the ol’ biology books and find ourselves some prehistoric ani-monsters.

Clearly named after the creatures from Greek legend, these surprisingly agile beasts have the physique of dogs, the size of alligators, and the teeth of monsters. The Gorgonopsid relies almost entirely on a single massive bite attack, chomping down with long canines that can pierce through tough armors. They have great variety in their size, so feel free to add a few hit dice, bump them up a Challenge Rating, and put them up one size category. Your players will thank you for the super fun increase in difficulty. Yay! 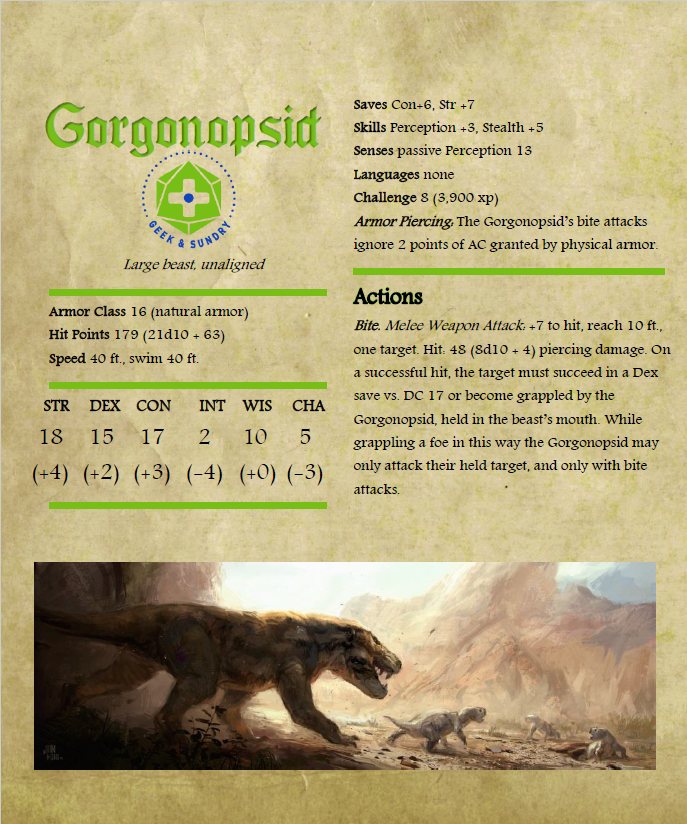 Made famous by the Jurassic Park movies, velociraptors were agile, semi warm-blooded, feathered carnivores. Yeah, they don’t look much like in the movies, and contrary to popular depiction, there’s no evidence they hunt in packs. They’re mostly just flightless feather covered terrors. 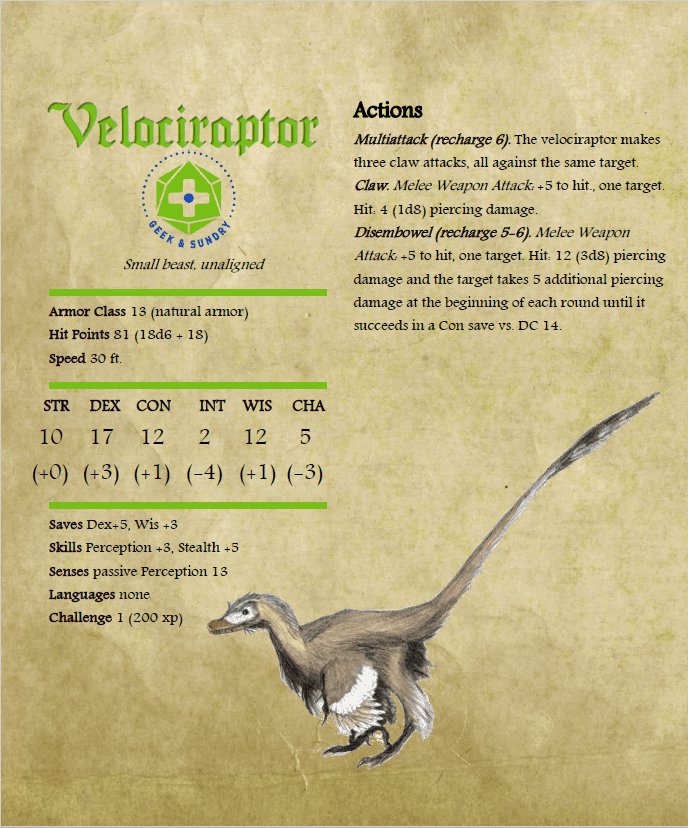 With a wingspan of almost 40 feet, the quetzalcoatlus was one of the largest flying animals that has ever existed (on earth). Named after the Mesoamerican feathered serpent god, this massive creature is believed to have walked on all fours in order to hunt, raining death from above with its long beak. With the ability to fly for upwards of 10 days at a time at 80 miles per hour, using this beast as a mount might be the D&D equivalent of jet flight. Who knows, maybe taming these creatures will revolutionize travel in your setting. 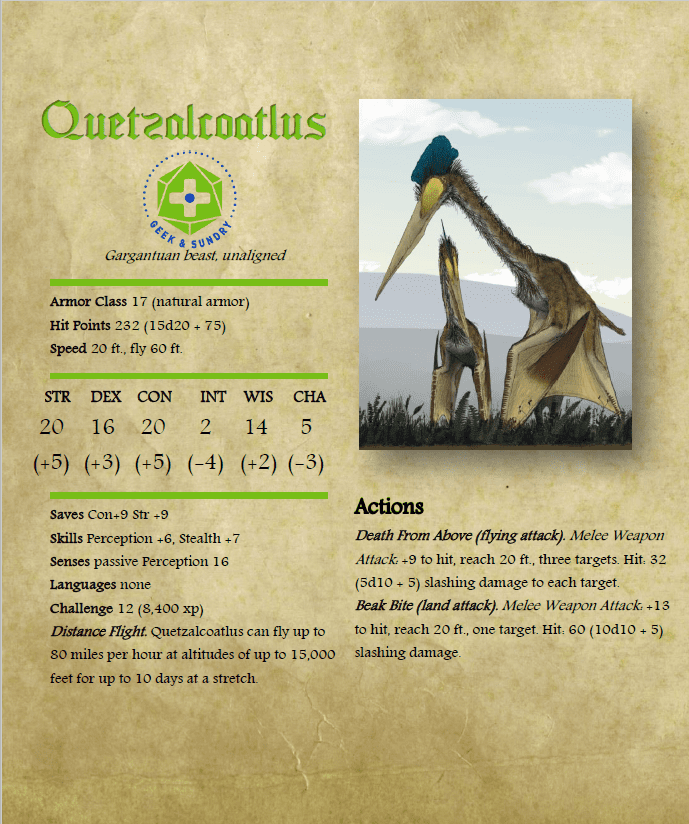 The sinornithosaurus was an agile, poisonous, chicken-sized little guy, which may have been able to glide, but probably not fly. We’ve taken all these possibilities into account and made them group hunters so they’re more fun to tackle in the wild. Great for sudden and confusing ambushes out in the jungle or just as the party is climbing down into the ravine. 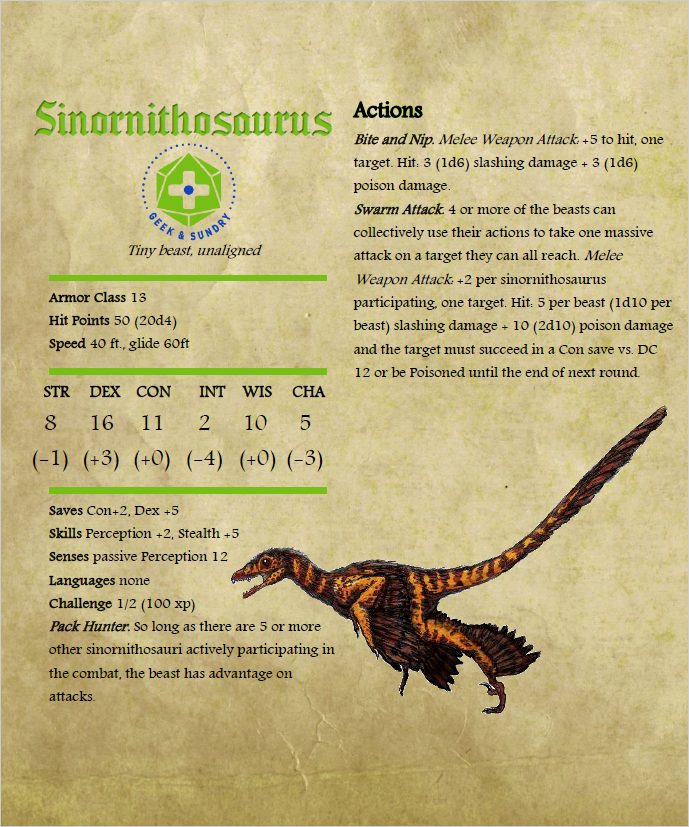 A massive version of the rhinoceros, the megacerops is probably the inspiration for the bronto in the Dragon Age video games. They’ve got a y-shaped horn, a heavy skull, and the muscle to plow them both into your players in a powerful charge. Great for forcing the group down a tunnel or out onto a shaky bridge to escape this rampaging monster. 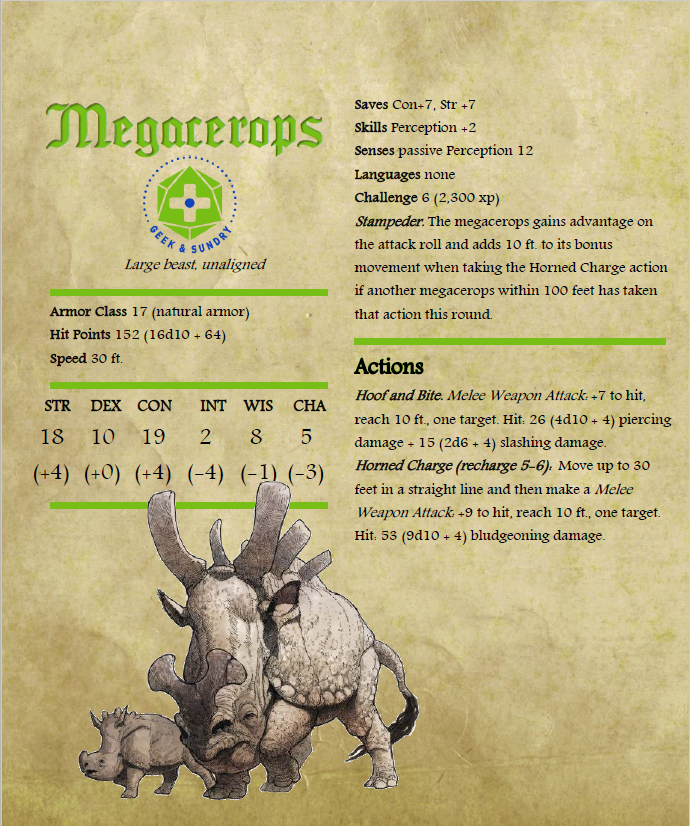 So, there’s a few to get you started.  You can find a few of the more common dino’s over on pages 98-99 of the Monster Manual. Get going on converting your favorite prehistoric beasts and let us know what you come up with down in the comments!