Fans of Dead of Winter will be excited to hear about the newest addition to the Crossroads series from Plaid Hat Games, slated to launch at this year’s GenCon.  UnGeek.PH has given us a fantastic first look at Dead Of Winter: The Long Night. By the looks of it, it’s still in the same style of the first in the series: narrative, story-centric, and meta-cooperative, forcing characters to play cooperatively while also trying to balance their own secret objectives. 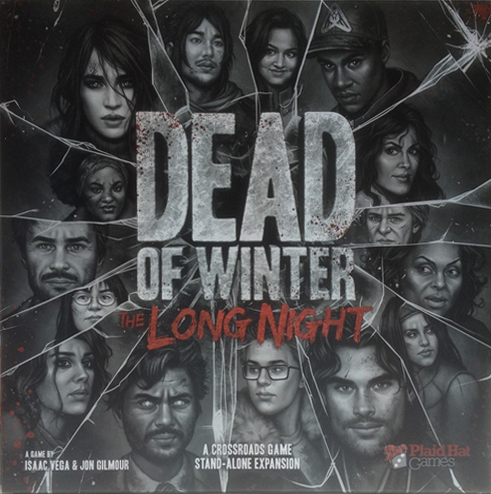 The preview shows us that we can expect a new colony of survivors (20 characters by the number of standees), locations that evolve with Crossroads cards, and bandits from another colony to fight off. There’s also what appear to be 9 new locations, one which is the mysterious new Raxxon pharmaceutical location that happens to be filled with, “Raxxon’s twisted human experiments.”  Doesn’t that sound just lovely?

Another bit of intrigue: fans of Spectre Ops may be familiar with Raxxon, the fictional company, implying that the universe is shared between the two games.  Plaid Hat could complete the circle by throwing in some bird-riding-mice, but we won’t be holding our breath.

Pre-ordering the game is being advertised on several online retailers, meaning you could also probably let your FLGS know to set aside a copy for you when they arrive in the fall.  In the meantime, you can watch the crew of TableTop play Dead of Winter.

Let us know in the comments what games you’re excitedly waiting for!