Finally You Can Be The T-Rex and Eat Your Friends In JURASSIC PARK: DANGER

In 2005 the American Film Institute announced their list of the 100 Greatest Movie Quotes in the history of cinema. It includes memorable classics like “I’m going to make him an offer he can’t refuse” and “Here’s looking at you kid”. It’s a strong list; if you’ve seen the film then any of those quotes are going to conjure memorable moments and powerful scenes. Curiously absent from that list is Ray Arnold’s iconic line from Jurassic Park. Spoken by Samuel L. Jackson during a tense moment surrounding the park security system, “Hold on to your butts” is as timeless as any of the lines on AFI’s list. It must have been 101.

Fortunately for cinephiles and dinosaur lovers, Ravensburger games did not forget this line when creating Jurassic Park: Danger. It’s featured right on Ray’s special action cards. In fact, every one of the 10 characters have quotes emblazoned on cards and play mats. Ordinarily this isn’t worth noting when discussing a licensed game, however Jurassic Park: Danger revels in call-backs and allusions to the 1993 movie in a truly enjoyable way. This game feels like Jurassic Park from the moment you open the box to the minute you pack it up. 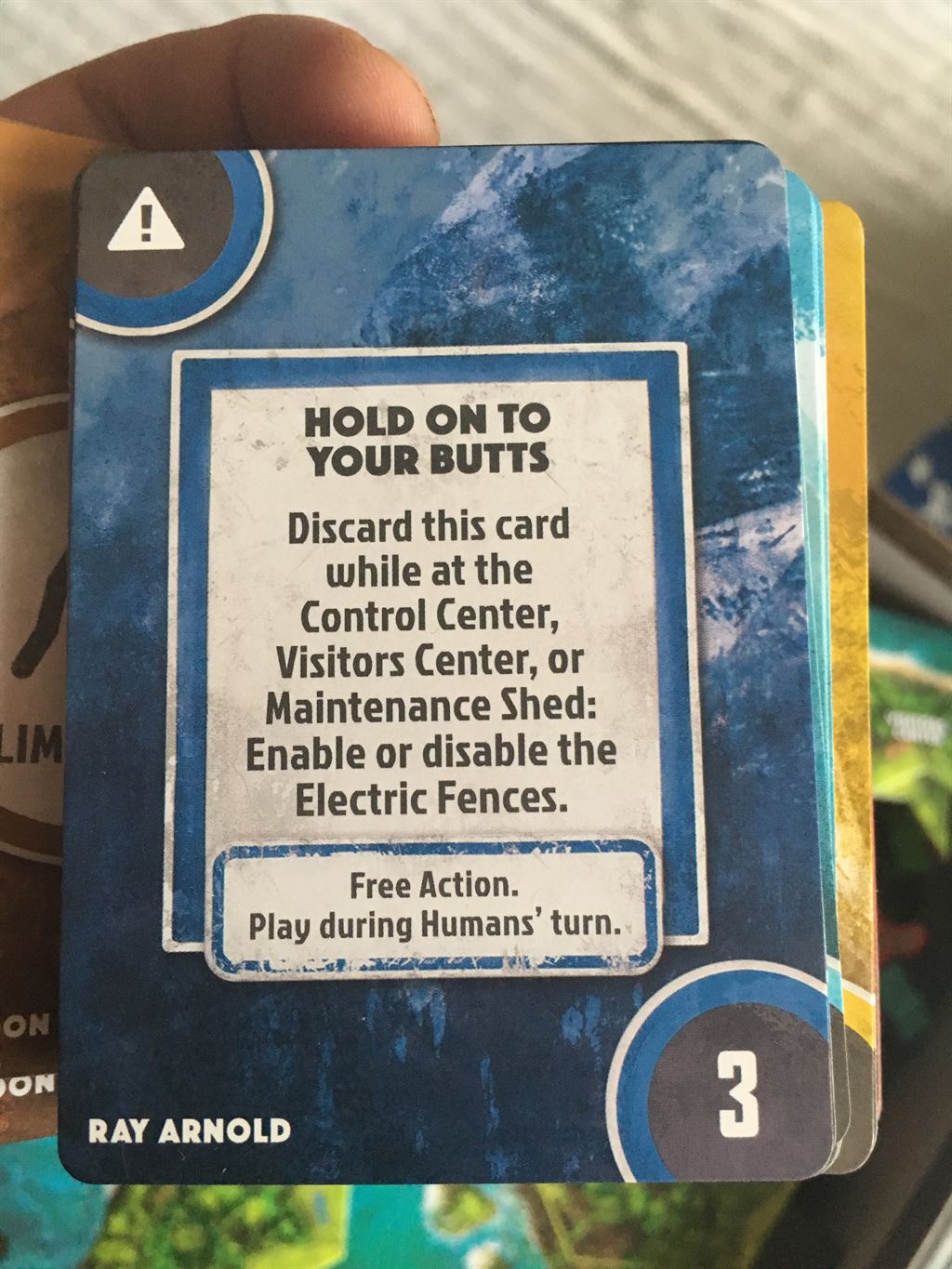 Given their checkered history, you’d be forgiven for strolling right past the licensed game section at your local Target (this game is a Target exclusive). However, Danger is worth a second look. There’s more under this box lid than a skin of film stills and opportunities to say “Life finds a way”. It’s an accessible game that can be played with anyone regardless of experience, yet it’s got the design chops to interest those of you who are no stranger to saving the world – or yourselves – on the table top.

Jurassic Park: Danger is a “one vs many” game. One player takes on the role of the park’s prehistoric inhabitants, while the rest play one of 10 familiar faces. The core actions taken by players are the same – which makes teaching easy – though how it’s accomplished differs. Dinosaur players card from their hand that provides various actions to 2 of the 3 dinos. One card may provide some climbing, which makes moving easier, while another may allow regular moving and sneaking around. This hand replenishes each round by drawing from a deck.

Humans, on the other hand, go about things much differently. They’re still playing cards to execute actions, however, they begin with access to their entire pool of cards rather than needing to draw from a deck. This gives them a lot of flexibility early while making things tense as dinosaurs attack (which removes card) and other abilities discard them. Additionally, getting cards back into your hand involves permanently ‘burning’ one out of the game. Given that being attacked while you don’t have enough cards in hand means your character becomes one of the island’s many casualties, it’s critically important not to get caught with an empty hand.

This form of hand management and discard is reminiscent of last year’s smash success Gloomhaven. While much simpler, it provides a similar amount of pressure. Regaining immediate flexibility sacrifices future actions, while waiting too long to recycle your cards comes with the risk of getting chomped. The Dinosaur player doesn’t get an action system as compelling as this, but they do get to make roaring sounds and spit at people with their Dilophosaurus. I’d call it even. 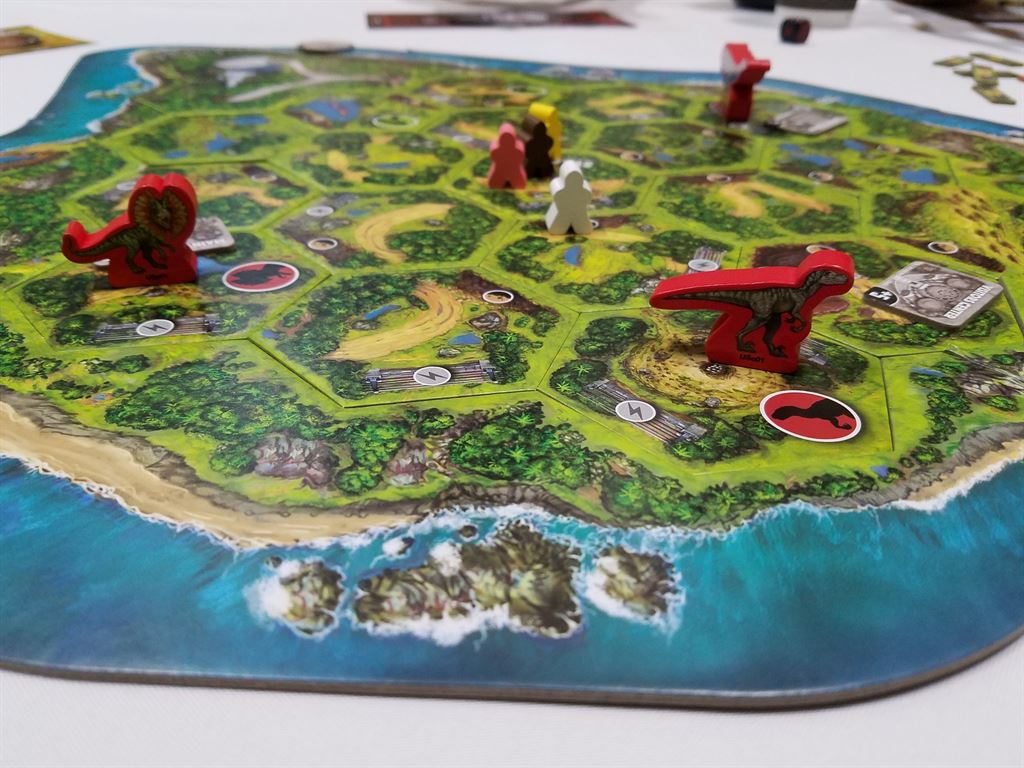 You can likely guess the goal of the game for the dinosaurs; it’s the fairly straightforward task of chasing down the humans and eating them no matter where they are. This makes this role perfect for kids or new gamers. It gets a little more complicated for the humans. Humans need to escape the island on the helicopter, but first they have to explore the island and accomplish things like re-energizing the electric fences. Humans characters have a separate private goal that relates to their on-screen actions. Alan Grant accomplishes his by distracting the T-Rex at some point during the game; blood-sucking-lawyer Donald Gennaro begins the game with his accomplished but loses it immediately upon being attacked. At that point, he can’t escape the island so you may as well let the dinos eat him and start with a fresh character.

Jurassic Park: Danger is clearly attempting to provide the film experience to tabletop gamers. The victory methods force you into replaying the narrative of the game, and the character special powers ensure that Ellie Satler acts like Ellie Satler. This is Jurassic Park, not Jurassic Park-inspired. For fans of the movie looking for an approachable accessible game, I definitely recommend it. It’ll be a while before I get tired of chasing down Tim Murphy and making sure he gets eaten.

What’s your favorite Jurassic Park quote? Tell us in the comments!

Looking for more opportunities to play with dinosaurs?