Fight the Invasion with One Night Ultimate Alien - Nerdist

Fight the Invasion with One Night Ultimate Alien

The app driven game offers the same hallmarks of its precursors with bluffing, varied roles, and player voting, but the Kickstarter is also advertising a more dynamic, app-driven experience, with the app changing rules and roles. Roles beyond villagers include that of an alien (there can be more than one), a blob (who wins by engulfing players but only if they live), a cow (who gets tipped) and a synthetic alien (who wins by getting killed). Furthermore, the game can be played as a standalone game, or you can combine roles from the other games of the One Night Ultimate series (Werewolf, Daybreak and Vampire). 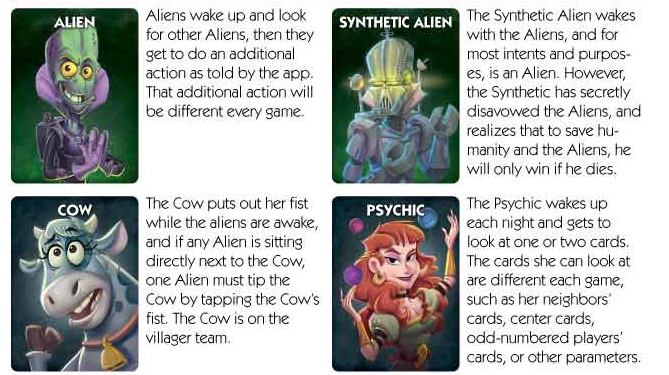 The Kickstarter has already funded (at the time of this writing significantly exceeded its $5000 goal by nearing $200K) and is expected to deliver in June of 2017.

Let us know in the comments if you’re backing any Kickstarters we should check out!

Teri Litorco is a massive tabletop geek and author of The Civilized Guide to Tabletop Gaming, where she shares advice by being a seasoned gamer as well as a cautionary tale. You can follower her gaming escapades by following her on Facebook, YouTube, Instagram and Twitter.