Fight Back Against the Dragons in the new Dragoon Expansion - Nerdist

Fight Back Against the Dragons in the new Dragoon Expansion

The land of Dragoon used to be pretty chill. The dragons got along well and spent their days lazily flying around stopping occasionally to eat or burn something down. It was a nice, quiet, peaceful life.

Until the humans showed up.

They brought civilization, agriculture, and more importantly, gold. Suddenly the dragons felt a great lust in their bellies. They wanted that gold, needed that gold, and now they’ll stop at nothing to get it. In other words, the humans ruined everything. 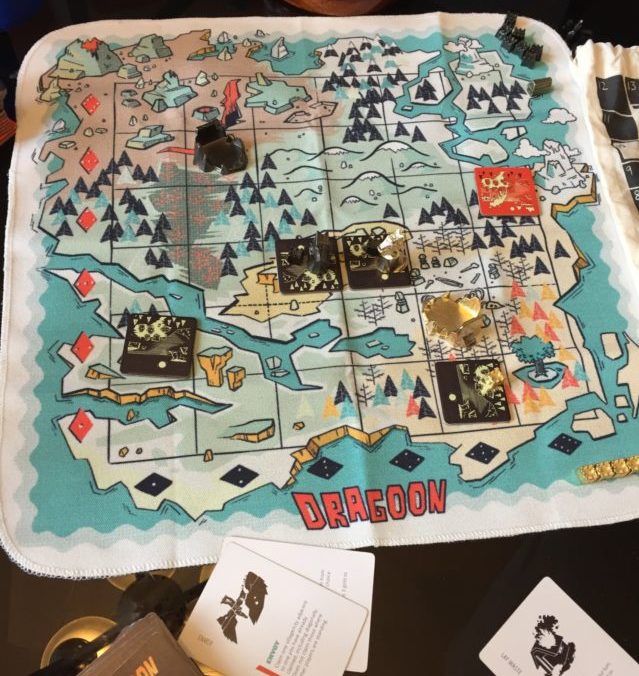 Originally funded in 2015, Dragoon is an action-strategy game of dragons and gold. Players play angry dragons and stomping around the board either burning Human settlements down or forcing them to bow in tribute. They can fight each other or rob each other’s lairs all with the single focused goal: create a gold hoard to make Smaug jealous.

I’m a big fan of this game. Villages pop up around the board like weeds while you fly around in search of gold. Destroying and conquering villages takes no special effort, because you’re a dragon. When fire comes naturally, it’s pretty hard for squishy pink humans to put up much of a fight. The action cards work together to heighten that feeling of omnipotence as well. If your opponents leave too many villages in their corner you can fly over and play “Lay Waste” to burn them all down in a molten temper tantrum. You can even use it to burn down the villages that worship you for a boost of gold. You can do that because again, you’re a dragon. 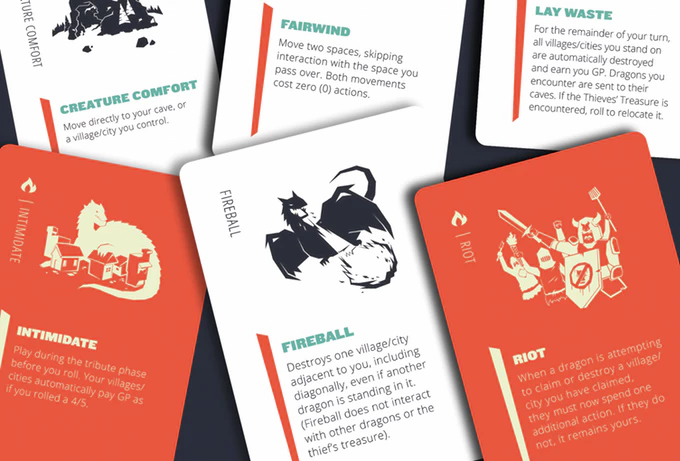 Now Dragoon is back on Kickstarter with a reprint and new expansion.

This new expansion does a couple things. For starters, it brings the total player count up to 6 players. Turns move pretty quickly in Dragoon so I don’t think this would bog things down. It also adds two new player options. Rather than taking on the role of an angry snarling dragon, you can now be either a Rogue or Barbarian that both play in very different ways. It’s time to fight back against the scaly terrors intent on destroying your home.

The Barbarian has his own deck of actions that are different from the standard set of Dragon nonsense. He has a level statistic that can change throughout play. He also gets to live in a boat, which sounds preferable to cave, if you ask me. Jake Givens of Lay Waste Games says that, “the key difference is that the barbarian levels up and down throughout the game, and each card has a level requirement in order to play it.”

The Rogue trades a boat for rapid movement through tunnels and a set of items that are activated and deactivated throughout the game. One of these items, the Poisoned Dagger, must be active or the Rogue will automatically lose combat. Choosing the right combination of equipment and timing their use is key to this new figure.

As Jake puts it, “Both the rogue and barbarian add more depth and strategy to the game. And not just for the players who take on those roles, the dragon players must also adapt their play to deal with the humans.“ Dragoon has been burning up tables since it was first produced, and this expansion looks to add an exciting new dimension.

Have you played Dragoon? Would you rather charge into battle like a barbarian or slink in the shadows like a rogue? Let us know in the comments!