It can be hard to imagine that, not so long ago in the galaxy of Star Wars fandom, dark times were upon us. The years after Return of the Jedi seemed to be a sign that Star Wars was winding down with a few TV movies and cartoons out there along with the final waves of the legendary Kenner toys disappearing from toy store shelves. The 10 year anniversary was approaching in 1987 and it seemed like nobody wanted to celebrate it.

Nobody, except one company: West End Games found some success with their licensed Ghostbusters RPG  and acquired the Star Wars license to release a game for tabletop roleplayers. What followed was one of the most influential RPGs of all time. Many gamers still have their original copies of the game that look like the beloved Millennium Falcon at this point, but Fantasy Flight Games has put out a stunning reprint of the original books to celebrate its 30th anniversary. While technically this year is the 31st anniversary, we acquired a copy from an R2 unit to compare with the original books and discuss why this game is still beloved by fans young and old. 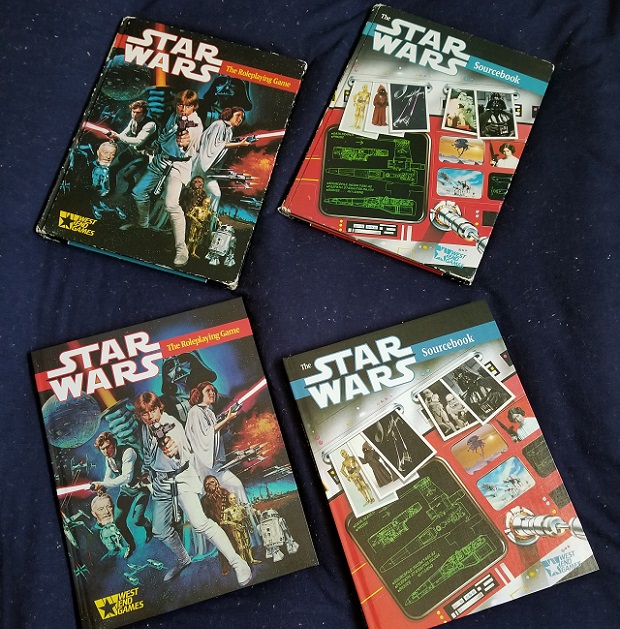 The designer of the game, Greg Kostikyan, took the basic principles of his Ghostbusters and applied it to Star Wars. (The Ghost Die from Ghostbusters shows up in a different form in later editions as the Wild Die) Character traits were defined by a number of six-sided dice. Roll those dice and beat a target number to succeed or fail. There are no hit points; characters are either wounded, incapacitated or dying. Players can create their own characters but there are also 27 ready-made templates that can be customized in minutes.  The driving force behind this edition of the game is speed of play. There’s no lengthy character creation sorceress or picking up equipment. The designers assume players want to play a character like the movies and have the tools ready to step into the game. Later editions slowed this pace a little bit with biggest skill lists and more customization options, but the first edition of Star Wars The Roleplaying Game is lean, mean and wants everyone blasting past Imperial Stormtroopers as quickly as possible. 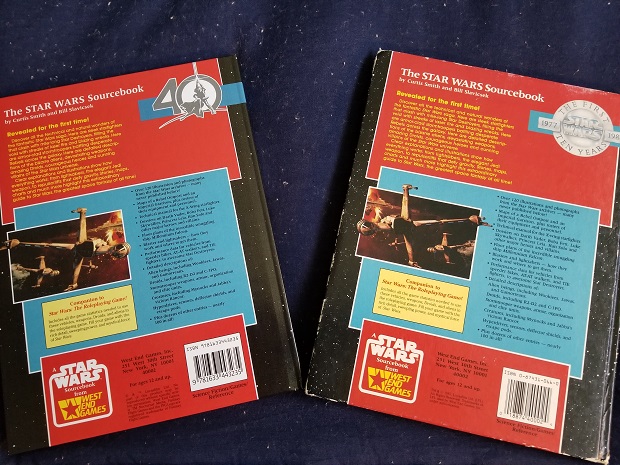 The anniversary edition features the original corebook and The Star Wars Sourcebook. This book is where most of the elements from the Star Wars universe are detailed for gameplay. All the gear, aliens, droids, guns, spaceships and major characters needed to begin a campaign are listed in this book. This is also where, for many fans, the Expanded Universe began by expanding information about the universe beyond the films that would later be used by Star Wars authors and, later, Lucasfilm itself. This book was also the beginning of a grand tradition in the game of repurposing unused concept art as other things within the Star Wars universe. For example, several concept sketches for Endor’s speeder bikes end up as different named models in this book along with the first mention of the concept of a swoop bike. 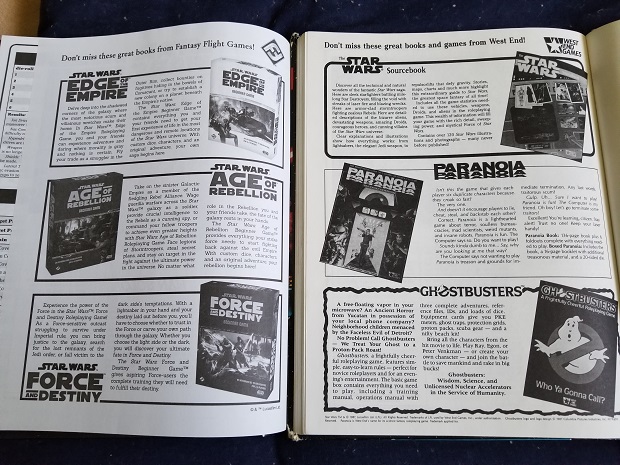 The reproduction is very faithful with a few small differences. The slipcase comes with a small pamphlet advertising Fantasy Flight’s current Star Wars RPG line. There’s a foreword from Pablo Hidalgo, who began his career working on the game before his current position as part of the Lucasfilm Story Group. The ten-year celebration iconography is changed to the 40-year celebration symbols. The ads in the back of the original have been changed from West End Games products to similar looking ones for current FFG offerings.

The core of the game is unchanged. The pages are mostly black and white with blue highlights, except for the full-color pages that offer still from the films and mock ads from the universe for everything from Imperial recruitment to a luxury cruiser tour around big locations in the galaxy. This reprint is perfect for fans who wish to remember the simpler days of Star Wars gaming or for parents looking to use simple rules to get their kids into the hobby.  These books launched millions of Star Wars stories with a handful of dice, pencils and scratch paper. It’s nice to see them back in the galaxy again. 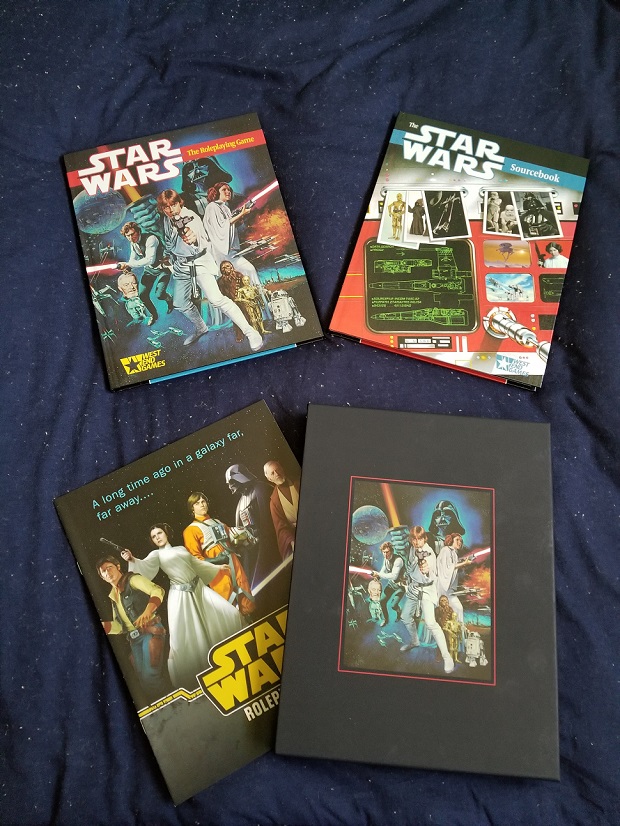 Do you have fond memories of playing Star Wars RPGs? Share your stories in the comments below!