Feast Your Eyes on this Awe-Inspiring Zelda Quilt - Nerdist

Feast Your Eyes on this Awe-Inspiring Zelda Quilt 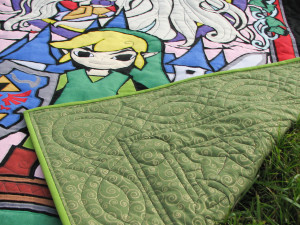 Reddit is known for its community of creative and witty individuals, but even more so for its welcoming embrace of DIY geekdom. One brilliant user, Aubrey Snow, known as CandySnow on Reddit, recently posted an impressive Legend of Zelda quilt she completed, which resembles a stained glass window pane from the Legend of Zelda: The Wind Waker.

In the Imgur gallery she created, Aubrey revealed the Zelda design was sent to her by a friend who wanted to give the quilt as a gift. After four weeks and over 160 hours of painstakingly detailed work, the quilt was finished and measures 52” x 37”. It was created with an applique technique, where individually cut pieces of fabric are layered over a larger piece and then quilted on top with a sewing machine. 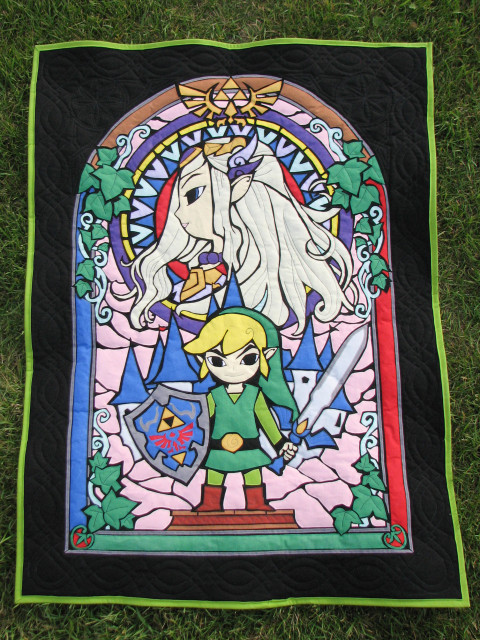 After revealing that copies of the quilt were for sale in her Etsy shop, it also sparked quite a debate on how much she was charging and why. While it’s no surprise to anyone involved in making handmade items–especially quilts or other textiles–that hours are long and profit margins are small, many users insisted she wasn’t charging enough. Others complained how expensive the quilt was (usually followed by a statement revealing how broke they were).

Despite the cost of Aubrey’s quilts, there were still many people willing to pay what it cost, and more, if necessary. In fact, she had so many orders and messages via her Etsy shop, she had to close it temporarily. “It’s definitely been a crazy last few days for me,” she explained in a message to us via Etsy. “Usually I get a few orders a year. After I posted the new Zelda quilt on Reddit, I had 3 orders in before I went to bed… and when I woke up I had 11. That’s the point where I had to shut it all down.” 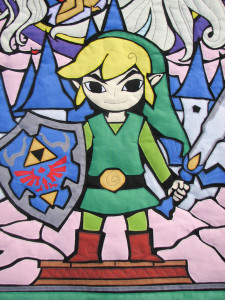 While 11 orders may not seem like a lot at first glance, considering each one takes about a full month to make, she’s already booked up through the end of next year. “It’s unfortunate because obviously, I want to sell as many as I can–I just moved to a new town and this is my only job at the moment,” Aubrey went on. “But I received what we affectionately call the ‘Reddit hug of death’… they loved it so much they killed my shop.”

However, if you missed out on purchasing one of her stunning quilts before she stopped taking orders, you’re not completely SOL. The talented quilter informed us she already has a wait list open, which you can get on by messaging her through her Etsy. In a few short months, she expects to start taking orders again, in which case you can own one of her stunningly handcrafted geek quilts. Even if Zelda’s not your thing, Aubrey has done other franchises and also takes orders for custom quilts, so start saving those pennies now, nerds!

What do you think of CandySnow’s Zelda quilt? Is it worth all the hype? Leave us a comment below!

Why Batman’s Anarky is More Relevant Than Ever

The Scott Pilgrim-age Guide to Toronto