One of the subthemes of this year’s Gen Con was adorable anthropomorphic animals. Cute critters were featured in all sorts of games, but the Starling Games booth was chock full of people gawking over one of the most gorgeous games at the con.  Everdell made its debut at the convention after raising a huge sum on Kickstarter. The game looks like lighthearted fun but underneath the gorgeous artwork and impressive components lies a tightly wound worker placement game that requires the ability to change strategy on the fly. 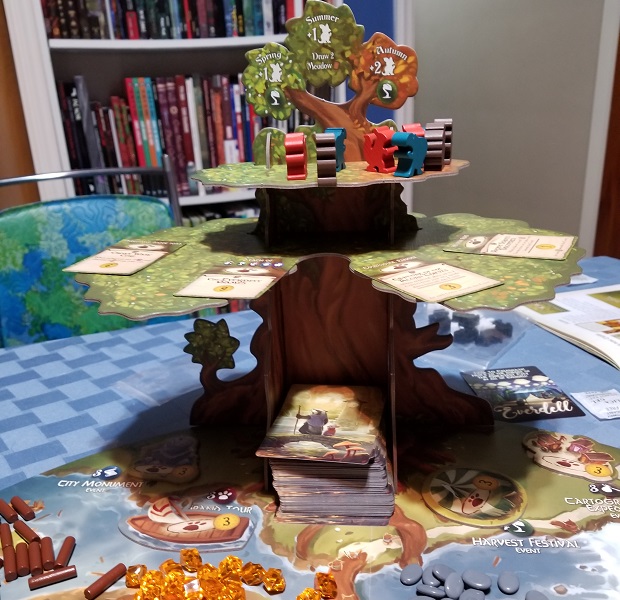 The components of Everdell dazzle during setup. There’s a gorgeous representation of the Evertree that holds a variety of components. The board spreads out into the Meadow, where the cards that players compete to build lay. The resources are scattered across the board as well, where players place their meeples to gather the things they need to build their village tableau in an attempt to be the town best prepared for winter. The 3d-board is impressive, but it’s also not static.

At the beginning of the game, players lay out unique worker placement areas and achievements in the tree that can unlock special powers and victory points. This is the first moment that Everdell reveals hidden depths. The basic objective of the game is to get as many victory points as possible but the way to get to these points changes every game. 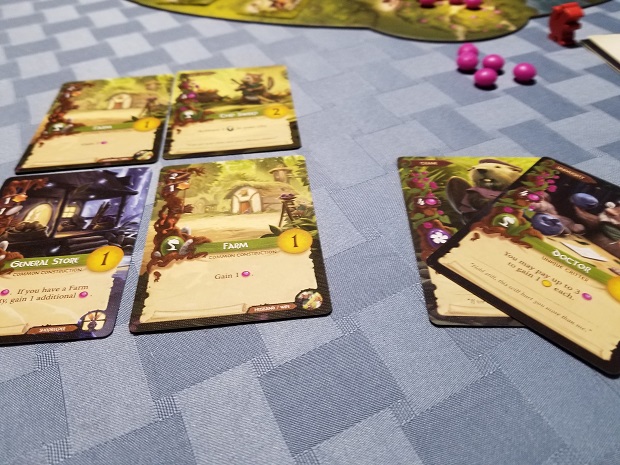 The simplicity stretches into the gameplay as well. Players have the choice of three actions on their turn. They can place one of their workers on a board space to gain resources, they can play a card from their hand (or the Meadow) by spending resources to put that card in their town, or they can prepare for the next season once all their workers are out in play by recalling them and adding new ones to their collection for the next set of rounds.  The game ends once all players have run out of these actions to take. Winter settles in, victory points are tallied and one town stands above the others. 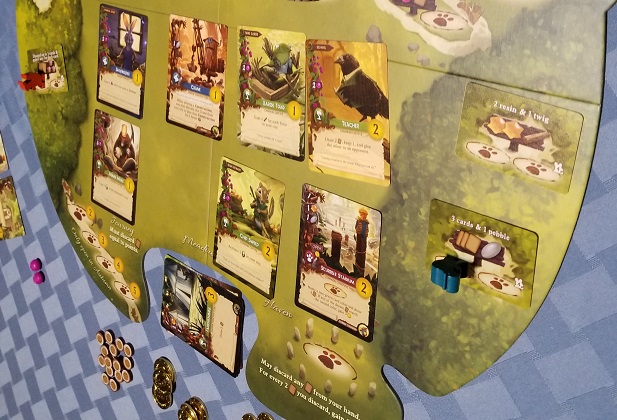 A lot of worker placement games depend on figuring out a strategy as early as possible and then sticking with it as much as possible through the game. There are some strategic elements in this game that follow this idea. Certain cards reactivate throughout the game, so getting them out early is usually best. Also,  Everdell has a very tight turn economy and throws a wrench into this type of play. Players need to be on their toes because another player is very likely to take a spot on the board or a card needed to execute a strategy the action directly before the strategy kicks off. Players need to reevaluate how to play efficiently every turn, and there’s definitely a bit of satisfaction to be had when they cut someone off rather than being forced to change up their own tactics.

Everdell also returns to Kickstarter on September 10 to fund its first expansion called Pearlbrook. The expansion adds a river-themed sideboard with new aquatic buildings and resources. Fans of the animal meeples will love the frog ambassador that they can send to deal with the residents of Pearlbrook and also the wonders they can build to make their little town unique. Fans looking to check out Everdell can find the regular version in their FLGS in October but they can order the Collector’s Edition directly from Starling Games!

Tell us about the most adorable game you’ve played this year in the comments!

A copy of the game was provided by the publisher.