Enter the Cutthroat World of Groceries with PASARAYA: SUPERMARKET MANAGER

If you attended 2018’s Dice Tower Con in Florida you may have come across an unassuming game called Pasaraya: Supermarket Manager. This clever deckbuilder from Malaysian designer Seh Hui “Felix” Leong does not feature outlandish art or themes. It’s packaged in a cute, colorful box that looks a lot like the milk cartons found on international grocery store shelves. Our US audience may not recognize the design, as our milk is typically found in jugs in the refrigerated section but it’s a cute artistic touch, along with the “nutritional facts” giving you details like game length and player count. The cartoony graphic design belies a deep and ruthless deckbuilder about the joys and pains of running a supermarket.

Dice Tower Con is an appropriate place for Leong to have brought Pasaraya. It was a comment from Tom Vasel himself, regarding his desire to play a game about running or shopping in a grocery store that planted a seed deep in Leong’s mind. This was years ago, and design didn’t begin immediately, but the idea lay dormant until Leong played Trains and the idea blossomed into an initial game design. In Trains, players build a network of train depots and tracks but fill their deck with waste that clogs up their hands. “This seems to be the perfect mechanic to simulate real-life management. So what if there is a game where each different type of cards could potentially be completely useless when it come up at the wrong time” wrote Leong.

In Pasaraya this effect is created through a multi-layered resource system. In your average deckbuilder, there is typically one currency resource (gold, money, etc) you’re using to build your engine in a race for victory points. In Pasaraya your currency is also ultimately your victory points. The winner is the person with the most cash on hand at the end of the game, but generating cash requires converting your finances into employees and inventory. “You’ve got to spend money to make money” goes the old saying, and that’s definitely true in Pasaraya. Cash is spent on milk, clothes, and appliances which are used in turn to fulfill sales goals or contracts. The reward is more cash and the cycle begins again. 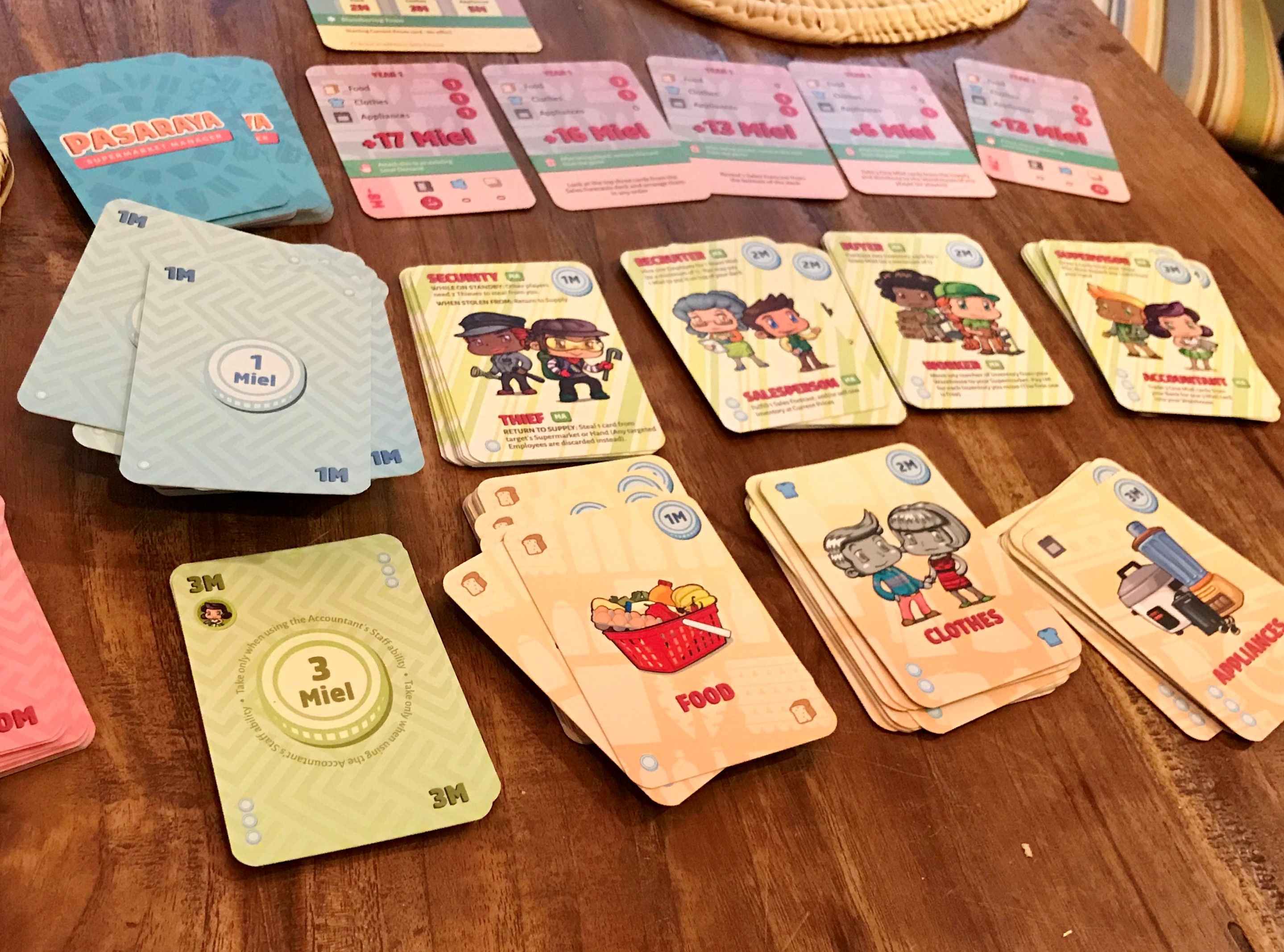 The other significant departure from the norm is that your fortunes aren’t permanent. Spend cash on inventory? That cash is gone. Use inventory to fulfill a contract? Also gone. Despite the fact that Pasaraya is a resource conversion game that requires you to run an engine of employees and products, there’s never a moment where you can lean back and watch your engine run. Management is a tough job, and you’ve got to constantly work at it in order to keep your store running smoothly. Leong has accurately captured an environment of expendable resources, and poor play can leave you with a full staff of employees that have nothing to sell

While this dual-layered resource system is clever, and would be enough to recommend Pasaraya, my absolute favorite mechanism in this game is the bank. Departing again from normal deckbuilding conventions, players have a significant amount of control over the financial makeup of their decks. Rather than fall back on a perpetual cycle of cards heading to the discard pile to be reshuffled into your hands, players have full control of their cash flow. Money can be freely exchanged between their discard pile and the bank. If you’ve got a lot of inventory or employees you’re hoping to get into play you can dump your cash into the bank where it will remain (mostly) safe. At other times you might flood your deck with cash, hoping to ride an economic boom into a hiring spree or an opportunity to stockpile resources. An event deck ensures that things aren’t perfectly predictable though never feels too punishing. 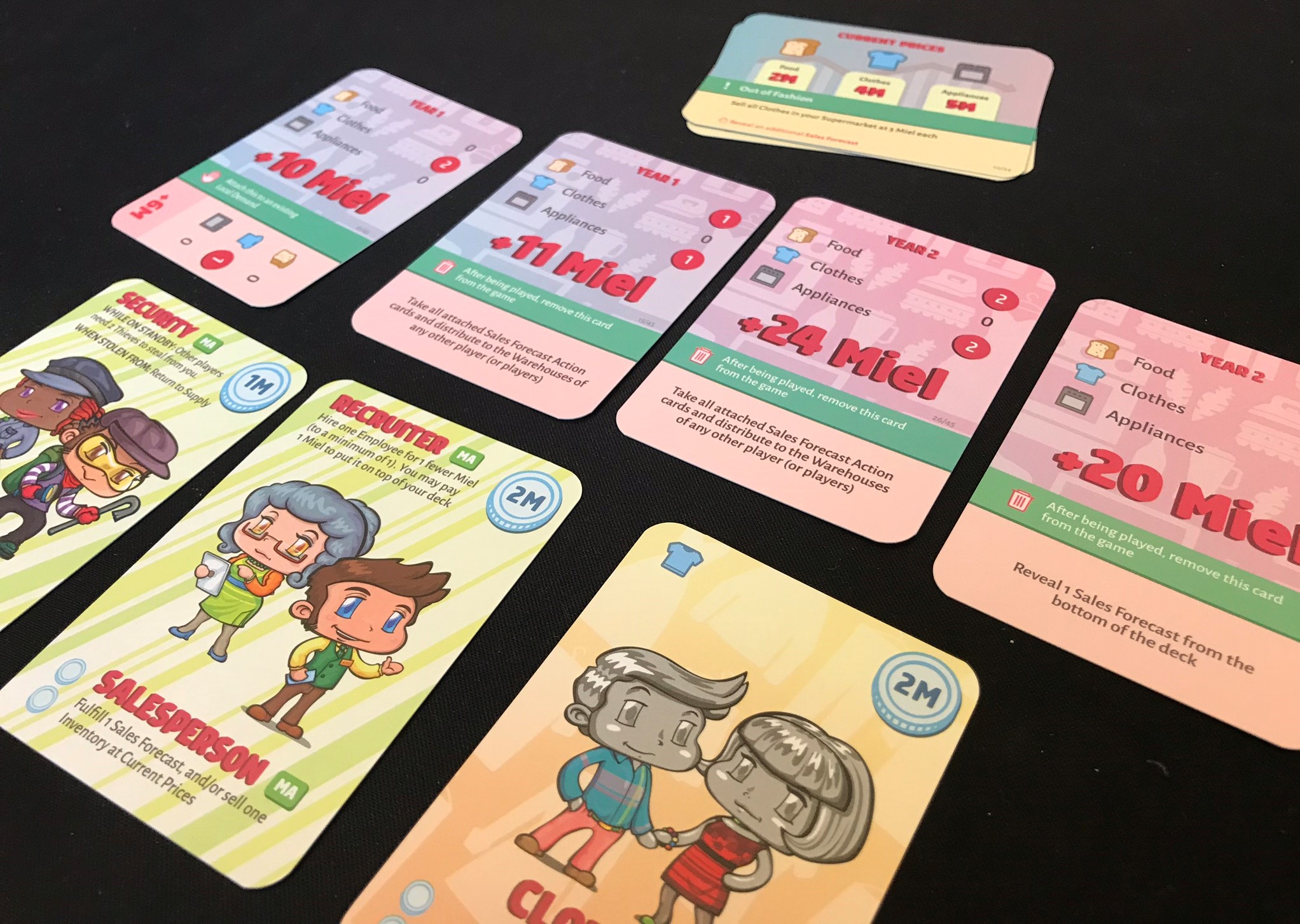 No doubt about it, Pasaraya is innovative and clever, which is impressive given the design resources Leong has in Malaysia are not as plentiful as they are in the US. “[The design scene is] in its early stages and in the last few years, more and more game designers in Malaysia have come forth to develop and craft new board gaming experiences.” Leong estimates there are about 10 Malaysian designed games in local circulation, and designers have to do a lot of coordinating via Facebook and Meetup. Even playtesting can be difficult; Pasaraya saw playtesting at previous year’s Dice Tower Cons as they afforded the opportunity to get Western players and perspectives on the design. As if that wasn’t enough, once the game is designed it’s still difficult to sell. Pasaraya is available primarily through email and Facebook sales. Leong is still handpacking and shipping individual copies!

With luck, the market will continue to grow for these internationally designed games. Oink and Pandasaurus are two publishers who make it to the Japanese Game Market every year in search of hidden gems they can bring to the US market.  “For South East Asia, I think the main factors being that the general populace only caught onto board games and game design until much recently and the lack of game publishers – considering it was a riskier business proposition back then with a niche audience. However, I can foresee this reality will change dramatically within the next five years – our neighboring Indonesia has at least two publishers that are putting out multiple games in a year and a few successful Kickstarters that is coming out from Singapore” wrote Leong.

I certainly hope that reality changes. It’s always great to play games from new designers. Designers and games that arrive from far off locations and different cultures can only enrich a growing hobby, and I can’t wait to play more of these games. Pasaraya may currently be difficult to obtain but it’s one that I think is worth seeking out. It’s cutthroat without ever being cruel, and easy to learn to play. And while it may be a tad longer than your average deckbuilder, the experience of riding a shifting economic landscape while managing a wholly unique deckbuilding system is a great one.

What is your favorite indie board game? Tell us (and the world) about it in the comments!