End The World With Dark Glee In Eschaton And Its Expansion

Sometimes, it’s fun to be the bad guy. Whether it’s pickpocketing every person in Skyrim or playing a Shepard that’s an utter Renegade jerk to everyone in Mass Effect, games are often a place to get out baser impulses by being a little bit evil for an hour or two. Tabletop games are no different; there’s a reason Cards Against Humanity is supremely popular. Gamer shelves are full of quiet games where they trade sheep for wool or quietly build a kingdom, but nearly all of them have at least one game where they are dashing thieves or shifty merchants. Gamers looking to add a little darkness to their collection might want to check out Eschaton.

This deck builder casts players in the role of a cult leader. The winner of the game is the cult leader who appeases the Dark One the most before the Armageddon card gets played. The decks represent the members of the cult. The decks players build have two sources: the Conclave and the Arcana deck. The Conclave is the classic deck-building market area where players choose from a variety of cards with different strengths and weaknesses. The Arcana deck is where cults gain special spells, relics that are worth victory points and demonic creatures that are usable both to generate skill points in a deck and victory points at the end of the game. The regular decks generate four different skill types: 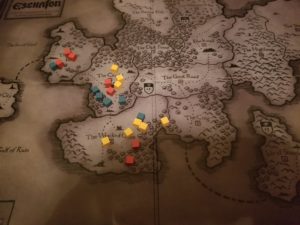 The deck building isn’t the only part of the game. Followers are tracked on a board of the world with some territories offering additional points of skill. The game board is where most of the Aggression points are spent, as followers spawn, spread and consume each other. In the early goings, this light wargame doesn’t seem to have much connection to the game but as the clock ticks down on the Omen deck and the Armageddon card gets closer to being drawn, each cult looks for any upper hand they can get.

The core set was available at Gen Con and is on its way to original Kickstarter backers and local game stores over the next few weeks. Gamers that want to jump onto the sacrificial pyre with both feet can do so through their current Kickstarter, which offers both the original set and a new expansion, Sigils of Ruin (currently on Kickstarter), due out next year. The expansion includes new cult themes that cater to different play styles, fortresses that make taking territories much more challenging, and Inquisitors infiltrating the event deck to roots out the cults bringing doom to the world. The Kickstarter ends on Monday, Steptember 18th, but the world ends the next time you haul out a copy of this unique deckbuilder!

What’s your favorite end of the world story? Let us know in the comments!