Tamriel Comes to the Tabletop in THE ELDER SCROLLS: CALL TO ARMS - Nerdist

Tamriel Comes to the Tabletop in THE ELDER SCROLLS: CALL TO ARMS

Hold the world of the Elder Scrolls in the palm of your hand thanks to Modiphius Entertainment! Based on the core mechanics of Fallout: Wasteland Warfare, the recently announced The Elder Scrolls: Call to Arms is wargaming at its finest. With gorgeous resin miniatures based on some of Skyrim’s most famous and beloved faces, such as Ulfric Stormcloak and the venerable Lydia, Call to Arms is sure to appeal to both longtime wargaming aficionados and Skyrim fans alike. 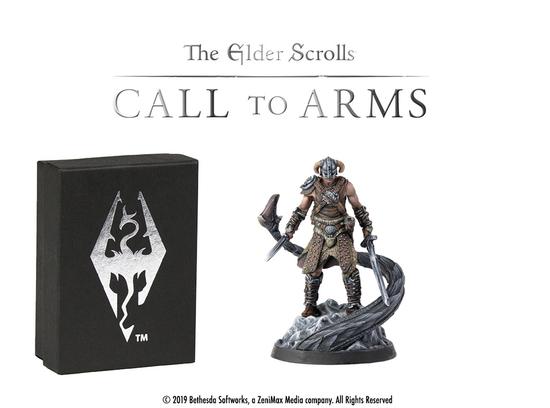 You’ll guide your miniature heroes to Skyrim locations that practically feel like a second home by now, like Dwemer Ruins, tombs infested with draugr, and the snowy forests and wilderness. The game is planned to expand to the other lands of Tamriel you explored in Elder Scrolls: Oblivion and The Elder Scrolls Online.

Modiphius has teased a little about what you can expect of the game mechanics designed by Mark Latham:

In the first wave, players will raise their banners in the fight for the future of Skyrim as they lead the forces of the Stormcloaks or Imperial Legion in the battles of the civil war. Forces will typically comprise 1-6 heroes and 3-15 troops. The first wave of releases will be a Two Player starter set and reinforcement sets of resin miniatures for both the Stormcloaks and the Imperial Army. There will also be a Dragonborne single player set, and more races and characters from across the Elder Scrolls stories are planned.

Like Skyrim, you can play your own way, whether that means seeking treasure and adventure, completing quests, or participating in battle.

You can pre-order the unpainted Dragonborn miniature right now, and stay tuned to the Modiphius website for more updates and information about the game. Elder Scrolls: Call to Arms is planned for a winter 2019 release.