The EDWARD SCISSORHANDS House Is Now a Free Fan Museum

Along with The Nightmare Before Christmas, most fans believe the quintessential Tim Burton film is Edward Scissorhands. Thirty years later, this modern fairy tale about the boy with the world’s most dangerous digits is still as wonderful as when it first hit theaters. The town they set the film in was actually a suburb of Tampa, Florida. They painted all the houses pastel colors for the shoot, to make them look almost like toys, or Monopoly pieces.

Just about all of the town seen in the film was a real neighborhood, and not a set. And the home that Edward’s adopted family lived in is now occupied by some die-hard fans of the film. (Scissorfans?) And according to a report from TMZ (via Comic Book), Joseph and Sharon Licalzi have turned their home into a sort of Edward Scissorhands museum, which is free to the public. They even gave it a name: Scissorland. And yes, that is definitely some Edward-inspired topiary plants outside the home. You can watch a video tour of their home right here:

Actual props from the film fill the entire home, as well as other Edward Scissorhands memorabilia and fan art. They even found identical wallpaper to the one from Dianne Wiest’s kitchen in the movie. The homeowners describe how some fans have walked through and cried, so deep is their love for the Tim Burton classic. Once the weather cools down in Florida, the owners are hoping to screen the film in their backyard. The same yard which Edward gave many of the women of the neighborhood a new hairdo. And at least one dog. 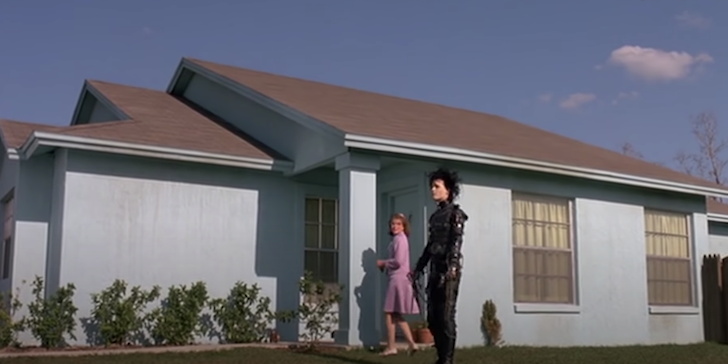 To make appointments for a walk-through of Scissorland, be sure to head on over to the official Instagram and TikTok accounts. Bringing your own version of Joyce’s famous ambrosia salad? That’s optional.