Love roleplaying games? So do we! We’ve got shows to help roleplayers of all kinds, from Game Master Tips to help GMs to Starter Kit to help people new to playing RPGs. Stay up to date with what’s cool and new in the world of RPG here on Geek & Sundry.

When tabletop fans enjoy a show, the first question they ask after the credits roll is often “What can I use to run this?” It’s a natural progression from enjoying the world to wanting to be a part of it. Licensed games can be great, but it often takes months or years for a property to become licensed, if at all. In the meantime, games that riff on popular settings happen all the time. Dungeons & Dragons began because the creators were fans of Tolkien. Fans of the Netflix phenomenon Altered Carbon don’t have to look far if they want to wrap themselves up in cyberpunk transhuman adventure. Eclipse Phase was inspired by the books that inspired the show and the concepts of resleeving, stacks and multiple copies of a character are part of what makes Eclipse Phase such a fascinating RPG.

“We were already kicking around ideas for a post-cyberpunk/transhumanist setting when we first came across Altered Carbon,” said Rob Boyle, Line Developer for Eclipse Phase. “While transhumanists and sci-fi writers had been tossing around mind uploading concepts for years, Morgan was really the first one I found who captured it in a gritty, compelling way. For me, it helped to solidify how resleeving could work in an RPG setting and the impact it might have on both PCs and NPCs.” 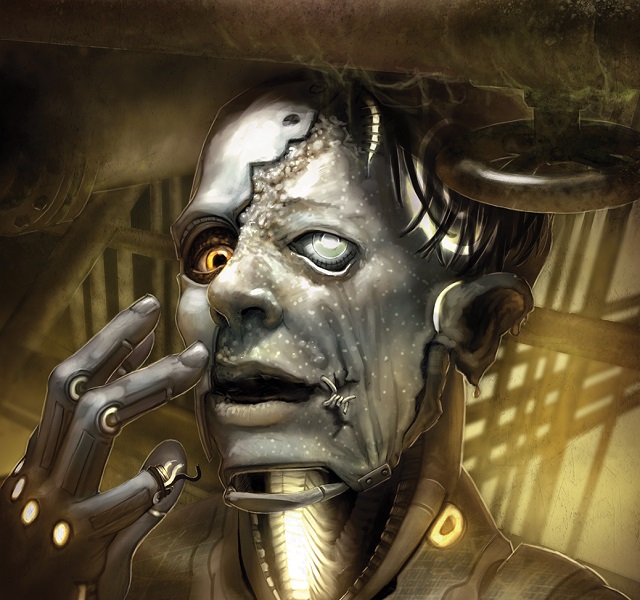 Eclipse Phase features a humanity driven away from Earth by a massive technological calamity. The remnants of humanity live in colonies, space stations and other habitats in our solar system. Travel between the planets is commonly achieved by sending digital copies of human consciousness to a location where they are put in control of a body called a sleeve. Sleeves can be modified with tech for the mission at hand. One week might put the players sneaking into a black bag facility with bodies modified for maximum stealth. Another week might mean a sleeve tuned to the aristocratic balls of Venus royalty with sculpted good looks and perfect pheromones.

The default setting of the RPG establishes players as members of Firewall, a secret organization dedicated to preventing humanity’s permanent destruction by feral AIs, doomsday cultists, or something unthinkable coming out of an alien portal discovered on one of Jupiter’s moons. The first edition, available now for players who want to jump into the world, explores the threats within the solar system and the exoplanets. A second edition Kickstarted last year is forthcoming, featuring mechanical improvements based on fan feedback.

“To help players and GMs get acclimated to the campaign types in Eclipse Phase,” said Boyle, “we’ve included four complete playable groups — two sets of Firewall operatives, a criminal enterprise, and a gatecrashing team — and are focusing the core rulebook around those three campaign styles. The Eclipse Phase universe and campaigns have a lot more breadth than that, but people need a more guided starting point!”

Eclipse Phase shares a lot of elements with Altered Carbon; resleeving bodies, a focus on investigations and technological advances that make us ask questions about the nature of humanity. It’s an excellent choice for players looking to explore a sci-fi setting that combines a high tech dark future with elements of horror, mystery and action. Death is not the end, but sometimes, dead might just be better.

Want to give it a go? You can download and try Eclipse Phase out for free. If you’ve given the game a whirl, tell us about it in the comments!