Dunkin' Donuts Serves Bacon Now (and We Tried It) - Nerdist

Dunkin’ Donuts Serves Bacon Now (and We Tried It)

I react to new Dunkin’ food products like Bruce Wayne responding to the Bat-Signal. The people need me. And the light doesn’t get any brighter than when bacon is involved. The latest item to hit the coffee chain’s menu is just a straight up sack of bacon. Really, that’s it. Snackin’ Bacon comes without any bells or whistles or bagels. It’s so simple it suddenly seems weird it wasn’t an option before. If there’s one thing Americans love as much as coffee it’s bacon. And to be able to get them both “on the run” is really what we’re searching for, isn’t it? Unfortunately, we’re going to want to keep looking. An inconsistent flavor profile and an alarming amount of pepper make Dunkin‘s bacon one light in the fast food sky we don’t have to answer. 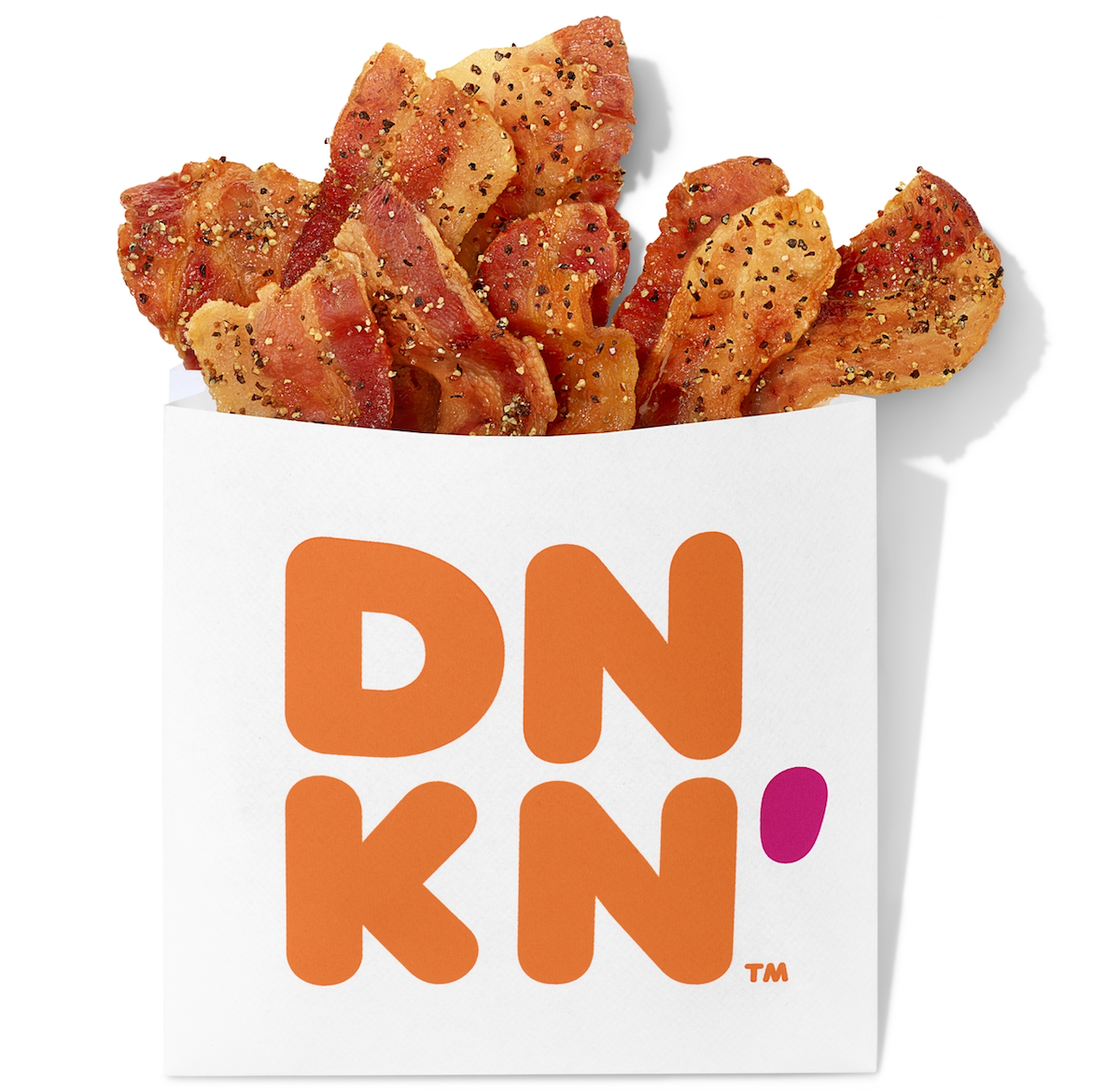 This week Dunkin’ announced its new Snackin’ Bacon with Sweet Black Pepper seasoning. Eight half-strips (equal to four full strips) of “high-end bacon” come with in order. It’s “wrapped in a portable sleeve for on-the-go snacking ease.” That’s a fancy way of saying it comes in a small paper bag. The bacon is not an entirely new product to the chain, but it is the first time it has been sold by itself.

“Our Snackin’ Bacon starts its journey smoked with natural cherrywood. It’s then treated to our sweet and savory blend of brown sugar and black pepper seasoning, creating a delightfully caramelized bacon our fans know and love from our Sweet Black Pepper Bacon Breakfast Sandwich.”

As weird as a bag of bacon might sound, it actually makes a lot of sense. It’s a high-protein snack option for customers who don’t want a sweet donut or muffin. And even if it is weird who cares? It’s bacon. Also, the price is… fine? An order was $2.49 at my participating sore. That seemed high for Dunkin’, but I felt like I got fair value after eating all of it. (Even though a bag didn’t look like a lot.) 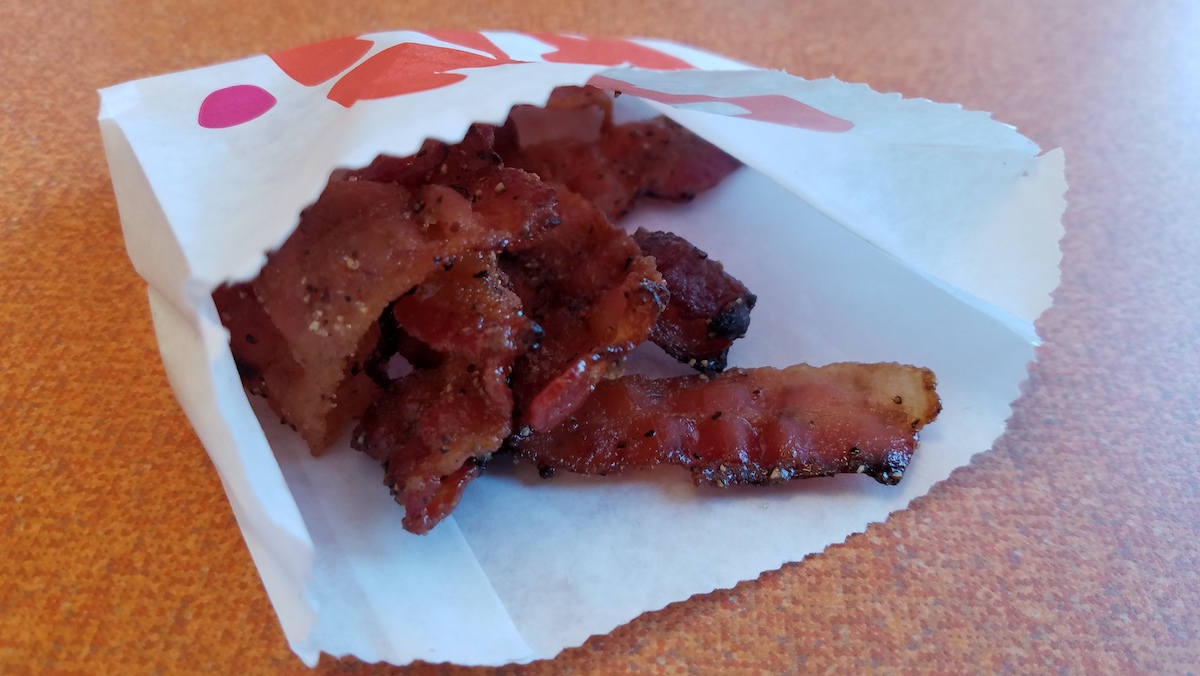 The problem is it’s not that good.

The “blend” of brown sugar and pepper was wildly inconsistent from piece to piece. How, I have no idea. The pepper overwhelmed most bites, and the worst were very unpleasant. The few that did seem to be a mixture of both were actually pretty good, but not great. I kept wishing they were all maple-flavored bacon with pepper. I’d also would have enjoyed brown-sugar flavored bacon with pepper.

Instead I got pepper. A whole lot of pepper.

The good news is the bacon is cooked well. The bacon is chewy, but not underdone, with a bit of crispiness. They make for a satisfying bite. However, it does have that reheated bacon consistency. I’m not sure that’s really a criticism since this is fast food bacon, but it’s easy to see how some would be disappointed by it. You’ll still have to wake up a little earlier in the morning and make your own if you’re craving fresh, sizzling bacon. 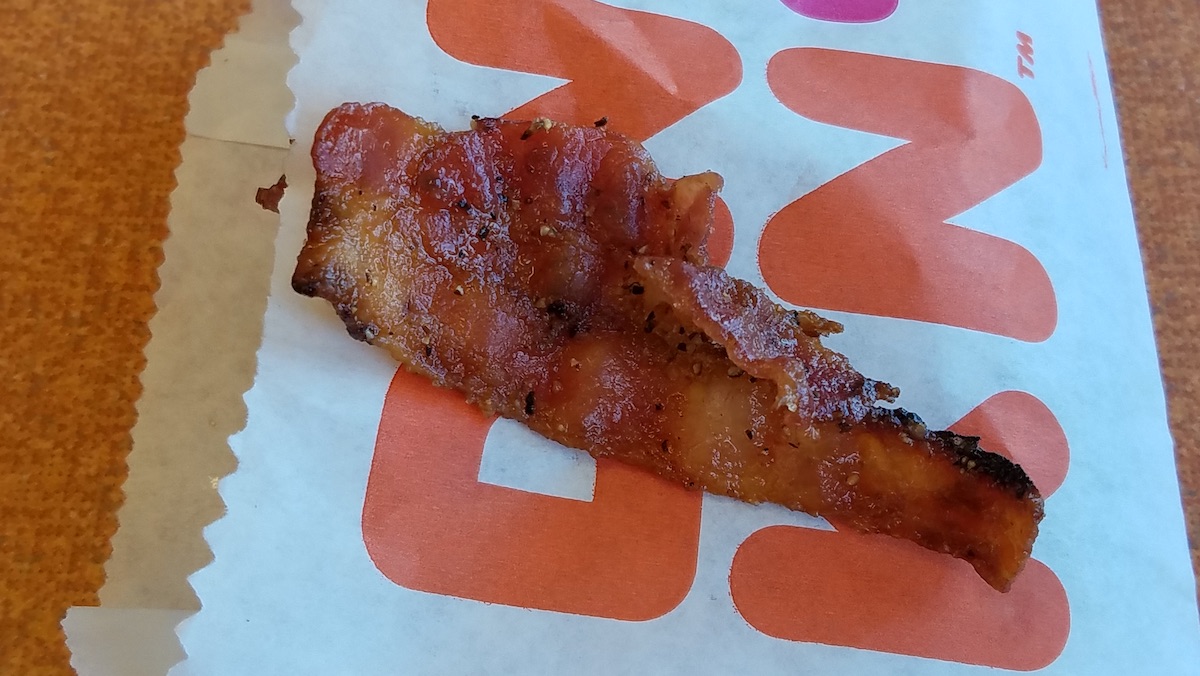 Will Snackin’ Bacon do in a pinch? Yes, especially if you don’t want something sweet and you’re making a Dunkin’ run. And it’s probably worth trying at least once in a few weeks. The flavor could become more consistent. They might start using less pepper and more brown sugar. In the meantime another new item, Matcha Latte (green tea powder blended with your choice of milk) is really nice. The iced one I got was creamy, not overly sweet, and very enjoyable.

But for now, unless you love pepper more than bacon, it’s okay to pass on the bacon. There’s a reason the Bat-Signal is only meant for one person.