It’s no surprise that Dungeons & Dragon has gained a significant following among the LGBTQ+ community — and as such, there has been a drive to increase queer and trans-inclusive representation in the official canon. In 2017, Jeremy Crawford (D&D’s lead rules designer) told Kotaku that he intended to increase LGBTQ+ representation in the game, in an effort to show that “people like me exist.” He explained, “All of our new adventures contain LGBTQ+ characters. This is true of our next adventure, and it will be true of our stories after that.”

Since this announcement, Wizards of the Coast have unlocked a veritable treasure trove of adventures, all containing hidden gems of representation. So join us as we roll for investigation, and examine just how well D&D has fulfilled Crawford’s promise… 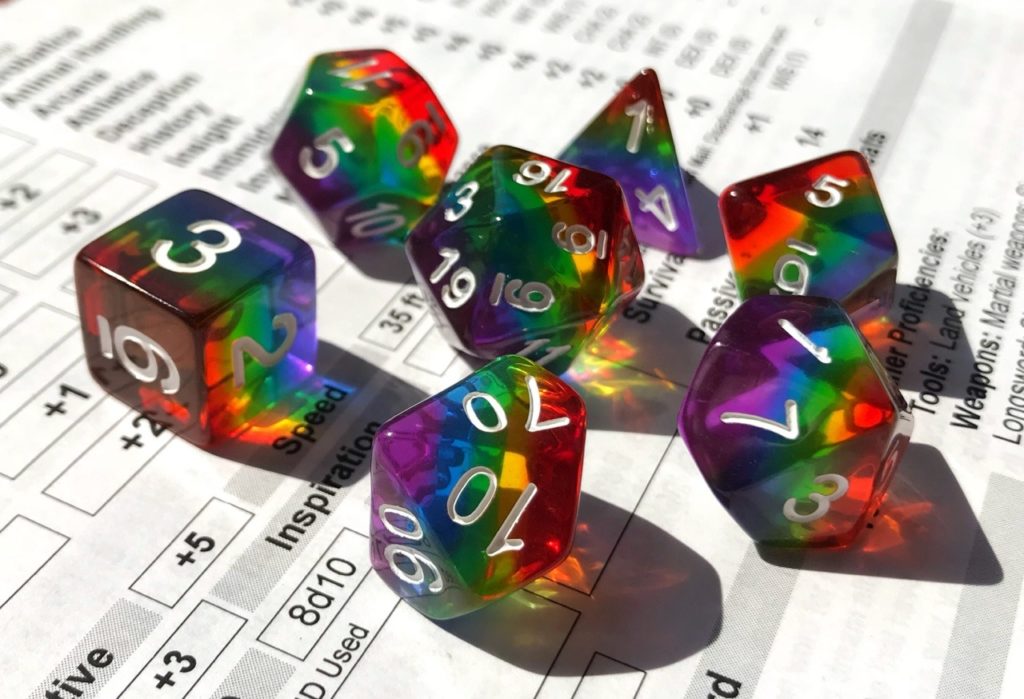 Don’t Be Confined To A Binary

Let’s start with the 5e Player’s Handbook. Although this predates Crawford’s interview, he was Lead Creative for this book, and it sets a precedent for everything that came after it.

In Chapter Four, once you’ve chosen your race and class, it’s time to think about who you are as a person. And right at the start of this chapter, in a subsection titled “Sex,” the Handbook has this to say: “You don’t need to be confined to binary notions of sex and gender. The elf god Corellon Larethian is often seen as androgynous or hermaphroditic, and some elves in the multiverse are made in Corellon’s image. You could also play a female character who presents as a man, a man who feels trapped in a female body, or a bearded female dwarf who hates being mistaken for a male. Likewise, your character’s sexual orientation is for you to decide.”

Right off the bat, the sentiment is inclusive and encouraging, which is exactly how you should address fledgling players. Of course, some of the terminology is a bit confused. Instead of the term “hermaphroditic,” we use “intersex,” which refers to a variety of deviations—genetic, chromosomal, and otherwise—from what we think of as traditional male and female bodies.

But The Handbook immediately dispels that idea we see so often in fantasy narratives, that history means tradition and rigidity in social values. Don’t be confined to a binary! D&D is whatever you want it to be! Love it. 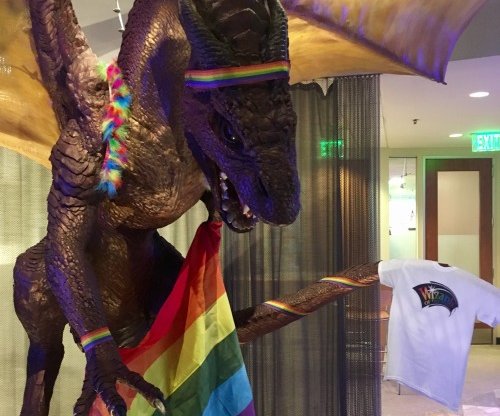 The Wizards of the Coast office during Seattle Pride 2018.

As you journey through the many lands of D&D, you encounter a plethora of side-characters to help or hinder on your quest. All of them have tidbits of backstory and many of them have romantic partners — and in the past, they’ve almost entirely been straight. But not anymore.

Books like Storm King’s Thunder (2016), Tomb of Annihilation (2017), and Dragon Heist (2018), along with oneshots like No Foolish Matter (2017), all feature NPCs with same-sex love interests. Urgala Meltimer, of Storm King’s Thunder, lost her wife to an Underdark expedition; in Tomb of Annihilation players are invited to clear the name of male commoner Belym’s husband; and in No Foolish Matter’s creepy carnival you’ll find Chay Bannister, a tiefling who is happily married to another man. (We’ll get to Dragon Heist later.)

Another Adventurer’s League game takes it one step further. In Birds of a Feather you meet Char, an intriguing individual and sibling to Abigail. “Char is the ever-fluid of the two, in mannerisms, gender, and in battle. When Char speaks, Char is boastful and happy to be the center of attention. When Char is quiet, Char is either thinking, calculating the next move, or doubting previous actions.”

It’s clear that Char is gender-fluid, but the game falters a little in how this concept is presented — most notably, the text shies away from gender-neutral pronouns, choosing instead to clumsily repeat Char’s name. Then there’s this quote from a little later on: “If asked as to why the reports say two sisters, or brother and sister, Char will roll his or her eyes.” Why not just use “they”? In addition to being a prevalent gender-neutral pronoun today, we’ve used “they” to refer to people without knowing their gender for a very long time, and it’s perfectly grammatically correct.

However, what Char has to say on the matter is fantastic. “Why do so many people ask questions that do not matter? I am who I am, as fluid and powerful as the sea itself. Now if you want to know how it feels? It is like wearing your favorite, perfectly tailored clothes, every day. It was the first thing I did with the powers I gained, and I have been forever comfortable.”

Beautifully put! And this also adds an interesting suggestion about what magic can do for gender identity. What does Char mean by “it was the first thing I did with the powers I gained”? That’s up to you to decide, perhaps in your next adventure… 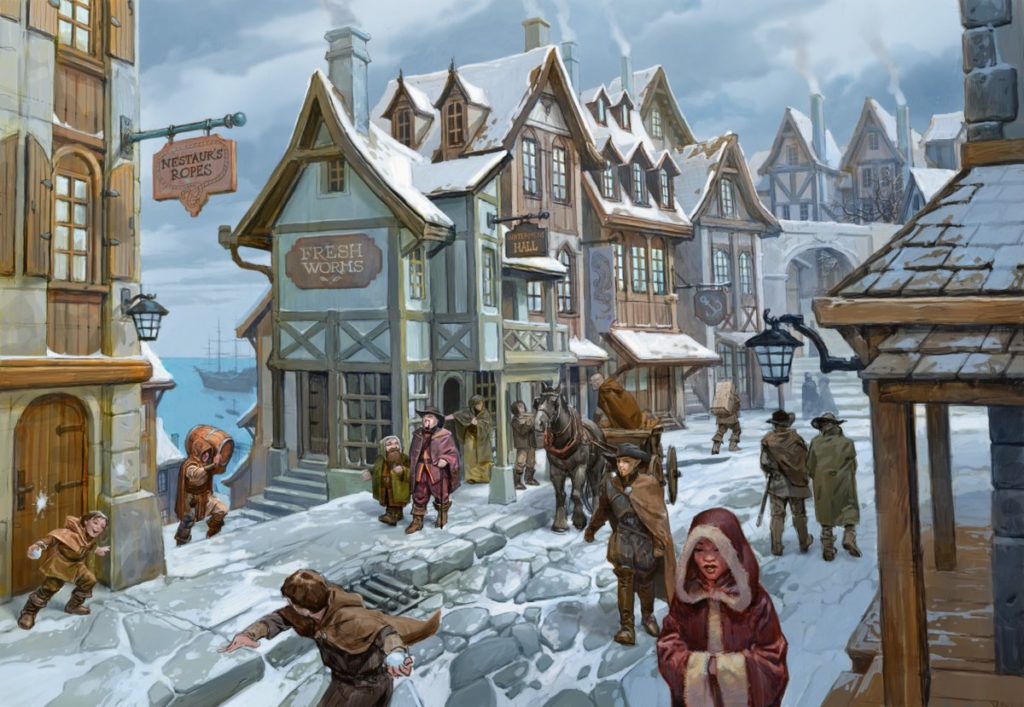 In ‘Dragon Heist’, Waterdeep is a city known for its colorful, gender non-conforming citizens.

Built Into The Lore

A few books have non-binary notions of gender and fluid sexuality built right into the lore. Mordenkainen’s Tome of Foes (2018) expands on the elf god Corellon, asserting that the primal elves who were built in Corellon’s image were able to “assume whatever sex they liked” — however, over time, Lolth’s influence lead to many elves losing this transformative ability forever.

This leads into some fascinating prompts for story and character-building on the part of the DM and players. “Occasionally elves are born who are so androgynous that they are proclaimed to be among the blessed of Corellon — living symbols of the primal elves’ original fluid state of being. The rarest of these blessed elves can change their sex whenever they finish a long rest.” The book continues to explain that this fluidity threatens the very foundation of drow gender-segregated society. (And excuse me while I just make that the starting concept for my next game…)

Dragon Heist also uses gender and sexuality to add to the rich tapestry of its world-building. In Volo’s guide to the city, he describes Waterdeep as “a haven for those who define for themselves what it means to be a man or a woman.” This paints a vibrant picture of an already colorful city, and is backed up by the characters you meet along the way, from the transgender drow Fel’rekt Lafeen, to the genasi blacksmith husbands who are your neighbors in Trollskull Alley. If you venture to Jarlaxle Baenre’s pirate ship, you’ll also find Margo and Khafeyta, the two women with whom he is currently romantically entangled; the book tells you that the women are “also in love with each other.” So mark one down for polyamorous representation, too.

Be Whoever You Want To Be

D&D’s push for more LGBTQ+ representation is fantastic, not only because it is inclusive of the broad spectrum of D&D players, but because it revels in all the story potential that comes from re-imagining the norms of gender and sexuality, both by enhancing the lore, and encouraging players to use this potential to create their own stories. In this way, it is beautifully true to the values upon which Dungeons & Dragons was built: that in this universe you can be whoever you want to be, or even rebuild the universe anew. And what’s more fun than that?