Before I get completely carried away with ampersands, let’s talk about some talented people who have taken the initiative (boo) to transform Dungeons & Dragons’ often complex concepts into brilliantly silly web comics for anyone to enjoy.

The D&D-based web comic has been gaining traction for as long as web comics have existed, attracting both D&D veterans and those new to the concept of roleplaying. Otherwise known as a campaign comic when it involves an existing work of fiction, D&D web comics typically depict a group of adventurers navigating a setting not unlike that of a tabletop RPG. In some of the comics, the game master has a voice, acting as a narrator to guide the guileless player characters around a world of his or her creation. In others, the PCs are left to their own devices, a group of ragtag adventurers with hilariously inadequate stats or min-maxing obsessions.

Reading these web comics introduces audiences to the endless possibilities for storytelling—and parody—inherent to tabletop RPGs. As in the real-life games, dice rolls influence the characters and stories, and when the story is as familiar as Star Wars or The Lord of the Rings, the dice rolls and D&D itself seem less like daunting, complicated things of statistics and strategy and more like creative ways to craft a unique and dynamic experience with friends.

If you want to check out some of the more well-known D&D-based comics, take a gander at the following list:

DM OF THE RINGS 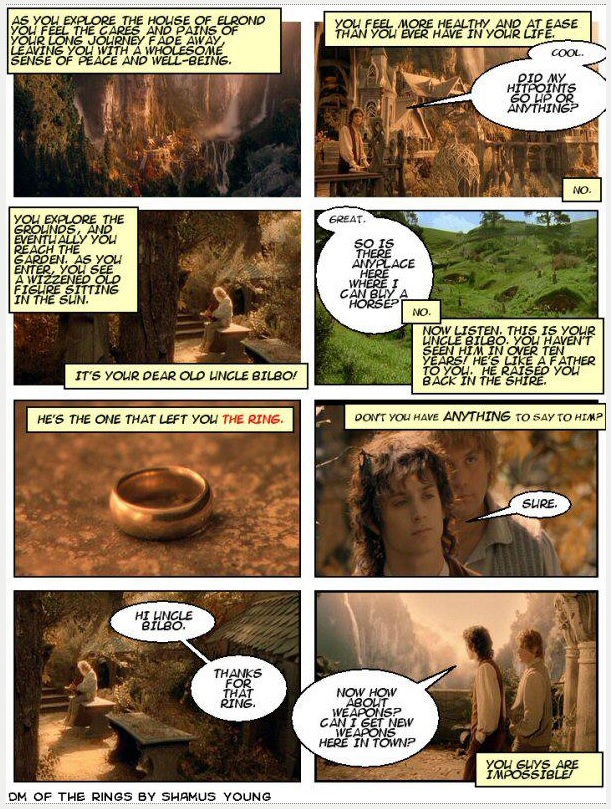 The father of the campaign comic, DM of the Rings by Shamus Young turns the world of The Lord of the Rings into a tabletop RPG campaign. The comic, and those inspired by it, uses screen captures from the film series to set the stage. The dungeon master acts as the story’s narrator in a world where The Lord of the Rings doesn’t exist and in its place is a replica Middle Earth, a fantasy realm with a rich and convoluted history of the DM’s creation. The familiar characters we know and love represent the “decisions” that the player characters make in the campaign. When the players attempt to stray from the DM’s path (AKA the films’ plot), they are instantly corralled into place by the DM. DM of the Rings has inspired the stellar Darths & Droids, based around the Star Wars saga, and other web comics in the past year, such as Avengers, Roll Initiative! and A Game of Roleplay. 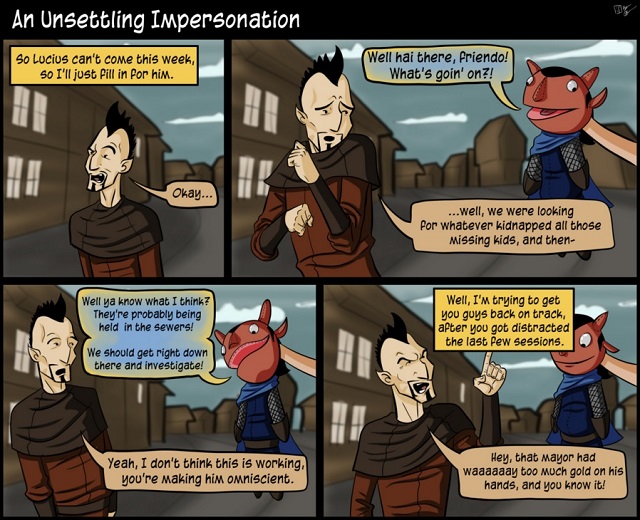 Currently on hiatus, Ben Weeman’s Dummies and Dragons began in 2014 and focuses on two PCs: a tiefling paladin, Lucius, and a half-elf warlock, Abraxas. Like DM of the Rings and Darths & Droids, the dungeon master interacts with the characters in the comic via square speech bubbles when he’s speaking as the DM and via curved speech bubbles when he’s speaking as an NPC. Occasionally, other players will join Lucius and Abraxas on their escapades, but mostly the duo is left alone to wreak havoc and annoy the DM.

Unlike the campaign comics mentioned above, Dummies and Dragons’ characters are original creations, and the comic is drawn by Weeman instead of being composed of screenshots. Each style has its merits, of course, and where DM of the Rings plays with characters and a story we know and love, comics like Dummies and Dragons offer a less strict format with which to convey the humorous ups and downs of tabletop RPGs. 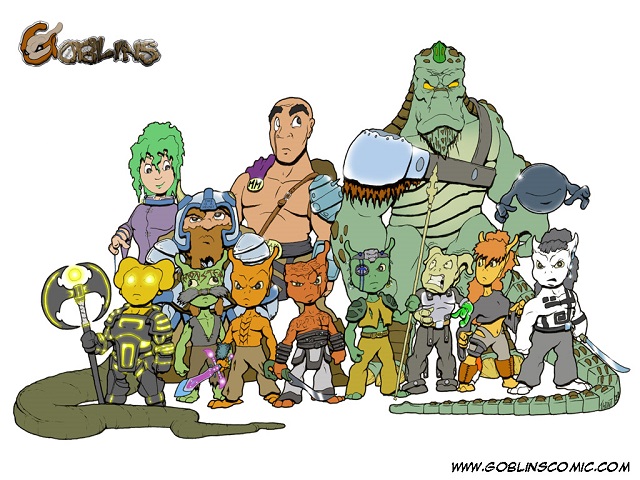 Goblins, like DM of the Rings, has been beloved by fans of the D&D-based comic since its first internet appearance in 2005. Drawn by Tarol Hunt and colored by Hunt’s wife, Danielle Stephens, Goblins depicts familiar tabletop adventures from the perspective of a fed-up goblin tribe who decide to become player characters. These goblins are tired of being harassed by Minmax the Unstoppable Warrior; the dwarven cleric Forgath, who worships the DM; and countless Drizzt Do’Urden knock-offs.

Reading Goblins enables newcomers to become acquainted with the ins and outs of D&D, as the writing mentions the game’s concepts without alienating those who haven’t played before. Hunt’s unique and playful style gives each goblin personality and characteristics all their own and turns the previously indistinguishable enemies into distinguishable heroes. Keep Goblins in mind the next time you go adventuring. 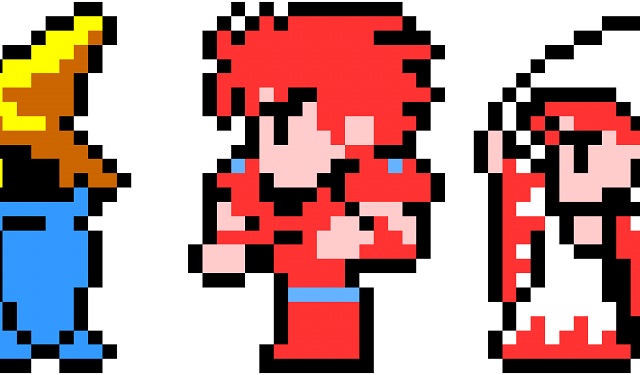 One of the first web comics to use 2-D video game sprites to illustrate its story, Brian Clevinger’s 8-Bit Theater focuses on four “Warriors of Light” from Final Fantasy. While not technically based in a D&D world, 8-Bit Theater references classic tropes of the tabletop RPG. The story follows the absurd party of Fighter McWarrior, Black Mage Evilwizardington, Thief, and Red Mage Statscowski, a min-maxer driven to gain the best stats possible, similar to the player behind R2-D2 in Darths & Droids. After seeing how comics parody this tactic, tabletop players should be aware that focusing on one or two stats to the detriment of all others will not necessarily result in the greatest (or, indeed, coolest) roleplaying experience. Any Red Mage worth his feathered musketeer hat could tell you that.

THE ORDER OF THE STICK

Created by Rich Burlew, The Order of the Stick follows stick figures as they navigate an original world built from edition 3.5 of Dungeons & Dragons. The characters often break the fourth wall, referring to fails on ability checks, stat bonuses on items, and other tabletop RPG nomenclature. With no game master to guide them, the six-person party fumbles along and runs into trouble around every corner; however, its members appear to remain well aware of their lot in life as stick figure RPG players. One of the most adored web comics of any genre (and now available in print), The Order of the Stick tells an intricate yet side-splitting story rife with pop culture references.