Dungeon Crawlers that Do More than Dice and Minis - Nerdist

Dungeon Crawlers that Do More than Dice and Minis

The dungeon crawl is a staple of RPGs and board games alike. It’s always fun to descend into uncharted regions full of danger, face the onslaught, and emerge victorious. But, lets face it. Some games do it better than others. Sometimes, you want more than just encounter, fight, loot, repeat. In that case, here are three games which have an interesting twist on the trope.

This strictly two-player game has a lot of traditional dungeon crawl elements. The human player is thrust into an uncharted, underground cavern. They move through a tile at a time, discovering new areas until finally reaching the end. That end shifts depending on the scenario chosen, but always involves going deep into the caves.

What really sets Claustrophobia apart is the combat system. Rather than just use hit points, the human player instead gets combat lines. Each round, the human player rolls dice and assigns one to each character. Depending on the value assigned, the character will have different attack, defense, and movement stats. But when a figure takes damage, they don’t lose hit points. Instead, they have to cross off a combat line.

Now, if a die of that value is assigned to them, they become exhausted and cannot take an action that turn. As a result, the humans start off strong and powerful, but little by little, their strength fades until the player is fretting over being able to place their dice. As the walls close in around you, it provides a nice–dare I say–claustrophobic feeling.

Meanwhile, the other player controls the demons that inhabit the underground caverns. While that player also uses dice, they instead pair them up in innovative ways to get special abilities each turn. Each side is engaging to play, but in totally different ways. 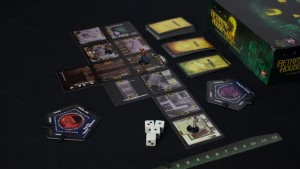 Ok, so it isn’t technically a dungeon. But there’s a basement. That’s underground, right? With the exception of the setting, though, Betrayal is a strong contender for one of the finest dungeon crawlers around. Each player gets a unique character with different stats. From there, the players cooperatively explore a the haunted house. Little by little, the house reveals itself and the players have to deal with omens.

Omens are special events that occur, which always end with an Omen roll. The rolls start off relatively easy, but get more and more chancy until a failure occurs and the Haunt begins. At that point, one player will become the Betrayer. Two manuals with fifty scenarios are then read to find out how the betrayer wins and how the others can succeed.

Like most dungeon crawls, Betrayal is all against one. A troupe of heroes against an evil villain. But unlike any other in the genre, you don’t know who the evil player is. In fact, not even the betrayer player knows it will be them until it happens. The result is an interesting paranoia. You want to explore the house, but you want to do so in a way that is helpful to you if you become the betrayer. But you don’t want to go off on your own lest you become isolated when the Haunt occurs and you can’t help your team.

It’s an exciting quirk and one that creates an almost wholly unique experience. 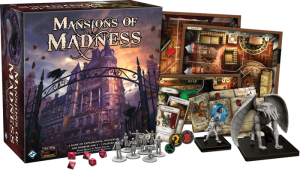 Mansions might lack exploration in the traditional sense, but it is still exploratory in the way that you don’t know which rooms will advance your story and which will prove mere distractions.

This game uses the Lovecraft mythos wonderfully. Not only does Mansions tell some great stories, it does so from within a horror genre, rather than fantasy. Players will face villains, learn secrets, and gather the clues necessary to solve horrible mysteries.

The second edition brings something new to the dungeon crawler–the app. Not only does it play music and set the atmosphere for you, which really sets the mood, it also takes care of some of the bookkeeping that the players would otherwise have to handle. And the best part? It allows the game to be fully cooperative. Now there’s no need for an evil player. The app takes that role and the players can plumb the mysteries as a cohesive body.

Do you like dungeon crawlers? Tell us about your favorites in the comments. What makes them unique to you?

TAGGED: mansions of madness, claustrophobia, Board Games, betrayal at house on the hill