I rub the tip of my thumb against my index finger nervously. Scanning the lineup of fantasy usual suspects, I piddle and argue with myself within the confines of my mind.

“That Dwarf thief looks like a badass” I muse. “Plus, red beard. That counts for something.”

But it’s the wrong choice. Having previously selected an Elf cutthroat with the pleasant name of Zelled, I had that dimension of my party – er, alliance – covered.

Petra was the right choice. A female Dwarf with the ability to manipulate the magical ether, she didn’t have a flowing red beard but she had a ludicrous stone golem named Lumpy. Lumpy would do. 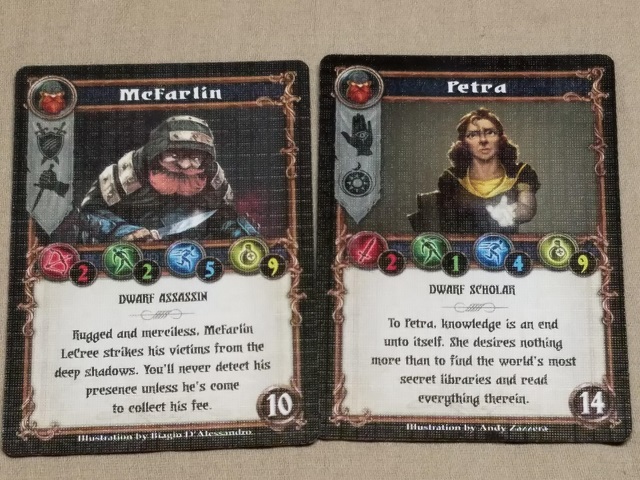 This is how the journey starts. Dungeon Alliance is a competitive game of building an asymmetrical party of fantasy heroes and then wrecking a dungeon in style. It’s a shiny new release from Quixotic games and established designer Andrew Parks. The all-important hook is the pairing of deck-building with dungeon crawl; it’s gnarly and it works.

Each time you play it begins with a draft from a plethora of heroes. You grab your group of misfits and then take their associated cards and slam them together into a single deck. Cards boost existing movement and attack, or provide asymmetrical powers. The combination of abilities provides for a distinct feel as you must overcome the challenge of gaining comfort and prowess with a band of diverse personalities.

Players begin at opposite corners of the unexplored dungeon. You’ll venture forward into darkness and slay beasts like giant arachnids scuttling along eight legs or raging ogres trudging upon just two. You’ll discover treasure, spring traps, and slay monsters for experience and profit.

The deep crevasses in my forehead threaten to become permanent. Looking over the hand of cards, my attention is grabbed by a solid burst of movement leading into an attack combo for the brave Paladin Holgar. This contrasts with a single magical spell for Petra that will level the terrifying minotaur taking up the corner of the room.

I flick my tongue across the roof of my mouth and toss a curse out into the mental void. If I don’t move Holgar out of danger, Jeremy will likely activate the Warg and go all Scruff McGruff on ol’ Holgie. Screw it, that minotaur’s eating lightning. 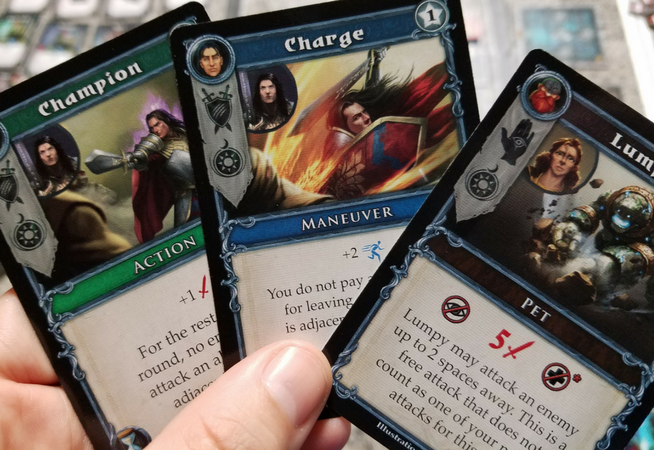 This is a game of captivating strategic thought. As you defeat monsters and gain experience you will purchase upgrades to your deck from a public offer. This slow churn has a fabulous pace as new abilities immediately enter your hand and at a speed that doesn’t throw everything out of whack. While interaction with opponents is limited early, there’s a sense of tension in acquiring those available cards before others pluck them up from under your nose.

The challenge of managing a thick decision tree is a defining element. It’s a design that’s focused on intertwining its puzzle-like mechanisms and feeding the process of your strategic choices as opposed to generating narrative. There are stories to be told but they’re second fiddle to the gripping system at play. This is seen in bits and pieces as much of the game is deterministic and managing variables within your control.

Dungeon Alliance boasts many similarities to Mage Knight: The Board Game, a venerated classic of recent years. They both feature parceled deck-building as a unique engine underlying a larger scope. In the end, it’s all about acquiring the most XP – functionally victory points – but it’s all in how you get there.

One of the limitations of both designs is in their commitment and length. Dungeon Alliance is a more simple and streamlined affair, but it still requires a lengthy stay in your seat. At roughly an hour per player, it can be difficult to hit the table at the full complement of four, even if that is precisely when it’s at its best. Downtime can be particularly little rough in your first several sojourns. 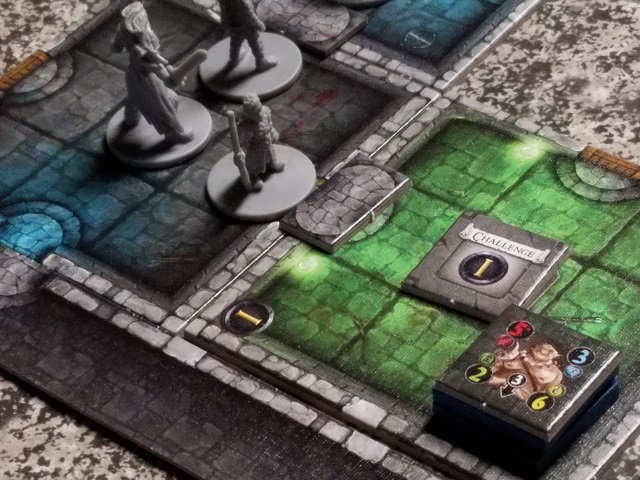 Just as Holgar’s blade came down upon the skull of the last zombie, I realized my mistake. While I had focused my attention on growing my party’s strength, Ben had made a bee-line for my neck of the dungeon. On his very next activation he’d have his fiery Elven sorcerer bearing down on my group and spilling blood. As I refilled my hand, I smirked and then looked him in the eye. Without a word passing from my lips he could read it upon my face: “bring it.”

The most satisfying aspect of Dungeon Alliance is in the extended arc. While the game requires a solid amount of effort, it rewards participants with the capability to achieve booming synergy and raw power. That satisfying aspect of deck-building is ever present as you meticulously curate your deck and strategically supplement your capabilities.

Over the four rounds of play the game will bubble to a crescendo. You will meet in the middle and lines will be drawn as steel is flashed and blood is spilled. Imagine a nice romp through a game of Descent, powering up and familiarizing yourself with your crew. Then you break through and ranks form as we spark the opening scene of Gangs of New York. It’s really the perfect climax and hits hard as you throw everything you have into the enemy.

Beyond the highly recommended PVP mode, you can relax and throw down in co-operative fashion. This feels like a huge World of Warcraft instance raid, groups fighting in unison to clear the bowels of an undercity. Peer a little farther and you’ll notice options for a campaign mode, starter decks to ease you into the system, and even a fantastic solo option. This is a release that has clearly been given much thought and attention as they’ve crammed it into the box and jammed the lid shut.

Dungeon Alliance is splendid. It’s certainly a recommendation with an asterisk, as it requires a room full of patience and a committed group of strategists. It demands multiple plays to fully ingest the system as you’ll continually be presented with a new deck of starting options and fun crew of thrill seekers. For those willing to take the leap you will find a heady yet not overly complex strategy game with enormous replayability and a host of solid mechanisms.

Have you played Dungeon Alliance? Let us know in the comments! Don’t forget to check out into our tabletop show Game the Game hosted by Becca Scott, where she recently played The Grimm Forest with fantastic guests, as well as created a must-watch How To Play tutorial video for the game.

In addition to Geek & Sundry, Charlie Theel writes for Ars Technica, Tabletop Gaming, Miniature Market’s The Review Corner, and co-hosts the gaming podcast Ding & Dent. You can find him on Twitter @CharlieTheel.