It’s no secret that the D&D Druid has been arguably one of the most bland classes in the game, alongside the Ranger and Sorcerer, with  players clamoring for some more options as announced by D&D in April from their player survey. The good folks at D&D have been working on making the class more playable and enjoyable for all by giving more options and with the Druid specifically, releasing some really interesting Circles and an update on the Wild Shape section for playtesting. Here’s a quick breakdown of what they’re offering:

Given their affinity with nature, it shouldn’t be surprising to see a druid aligned with the Feyworld, drawing power and having a kinship with good-allied Fey. It also gives great roleplaying options for the Druid, one that makes sense for a druidic character that is cheerful and gregarious. While the other Circles (including the experimental ones below) are so firmly rooted in the earth, and with it a certain realist mindset, Circle of Dreams offers the option of an inextinguishable optimism and aloofness above the darkness of the world. Reading the description, it doesn’t seem at all out of place for a Halfing druid, smoking his pipeweed and enjoying his ale with friends around camp, to find himself choosing the Circle of Dreams.

In terms of the new rules, while the later level rules are interesting, Balm of the Summer Court which is earned at level 2 makes the Druid a triage healer in the heat of battle (and is even more exciting when paired with something like Bardic Inspiration).

Circle of The Shepherd

Where the Circle of Dreams helps a group fill a hybrid-healer slot, Circle of the Shepherd offers the druid the potential to be an extremely helpful buffer class with the Spirit Bond ability. It also has additional benefits that are somewhat Disney princess-esque, with Beast Speech, which lets you talk to animals, and Guardian Spirit that brings back some serious throwbacks to the movie Mulan. The Circle itself focuses on summoning, protecting, and working more directly with animals, again, like a Disney Princess. Nobody says you can’t summon some birds to help you get dressed in the morning, and to sing with, much to the chagrin of your group’s bard.

Ok, don’t let the name put you off, because this Circle is much darker and less glittery than the name would entail. If you want to fight all things dark and unnatural using the power of all things dark and unnatural, like a Druidic version of DC’s Constantine, this is the Circle for you. Whether it’s reaping HP from slain hostile creatures with Harvest’s Scythe, or treading paths used by the undead and can cast the spell etherealness.

It also gives you some really interesting roleplaying options as well, since this is the Circle that lends itself to some nihilistic characterization in roleplaying, which can serve as a fun foil for a group full of do-gooders. 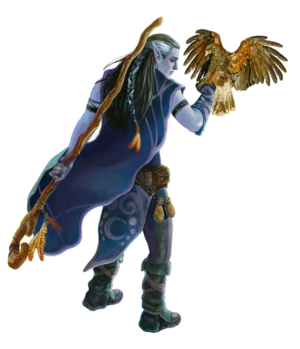 The updates to this rule include an improvement on Known Beast Shapes, which opens up the toolbox and helps DM’s give options off the get go for shapeshifting Druid players. They also revise how players can acquire additional beast shapes, giving them options through either Observation (observing a beast for 1 hour) or Interaction (actively interacting with a creature for 10 minutes, with advantage on the check for petting the creature for at least a minute.)

All in all, Druid players have a lot to be happy about, but the devil is in the details. Next week D&D will be releasing a survey for players to give feedback on, so roll up a character and try these circles out for yourself, and when done, make sure fill in the survey about these new circles and let them know what you think.

What do you think about these new options at first glance? Let us know in the comments!

Teri Litorco isn’t altogether against the notion of playing D&D with a group fully based on Disney princesses, with Ariel being a Druid of the sea, Cinderella being a Sorceror with a Fey familiar and many other zany ideas. She has also written a book called the Civilized Guide to Tabletop Gaming, a survival book for gamers lauded by The New York Times. She also overshares on social media: : Facebook, Twitter, Instagram and YouTube.

Marvel
Everything We Know About MS. MARVEL on Disney+
Nerdist
4 MIN READ