No, The 'Doomsday Asteroid' Will Not Hit Us - Nerdist

No, The ‘Doomsday Asteroid’ Will Not Hit Us

Who out there is looking to stack some beds? ‘Cause we hold here in our hands a big load of BUNK!

According to a bunch of different news outlets, an asteroid, which goes by the ever-so-sultry moniker, 2002 PZ39 (or 163373), will be “approaching” Earth later this month, but here’s the thing:

It is not going to hit us.

In fact, while it’s technically true that 2002 PZ39 will come “close” to Earth on the scale of cosmic distances, there will still be a more-than-comfortable 3.6 million miles between our planet and the asteroid when it gives us the ol’ flyby. That’s 15 times the distance between Earth and the Moon.

Hi, this story ( https://t.co/NJ97FN8HmR) appears to have originated on the International Business Times ( https://t.co/ZeRyfcMLHc) which links to a “statement” that is just a definition of Potentially Hazardous Asteroids — nothing about an actual asteroid.

To be fair, the outlets we’ve seen reporting on the story do eventually note this fact, but the asteroid is consistently pitched as “approaching” us—as if its near-term trajectory ends with an IRL version of Deep Impact. (Yes, we know it was a comet in Deep Impact.) In fact, what PZ39 will do is pass by Earth, as shown in the JPL images below. 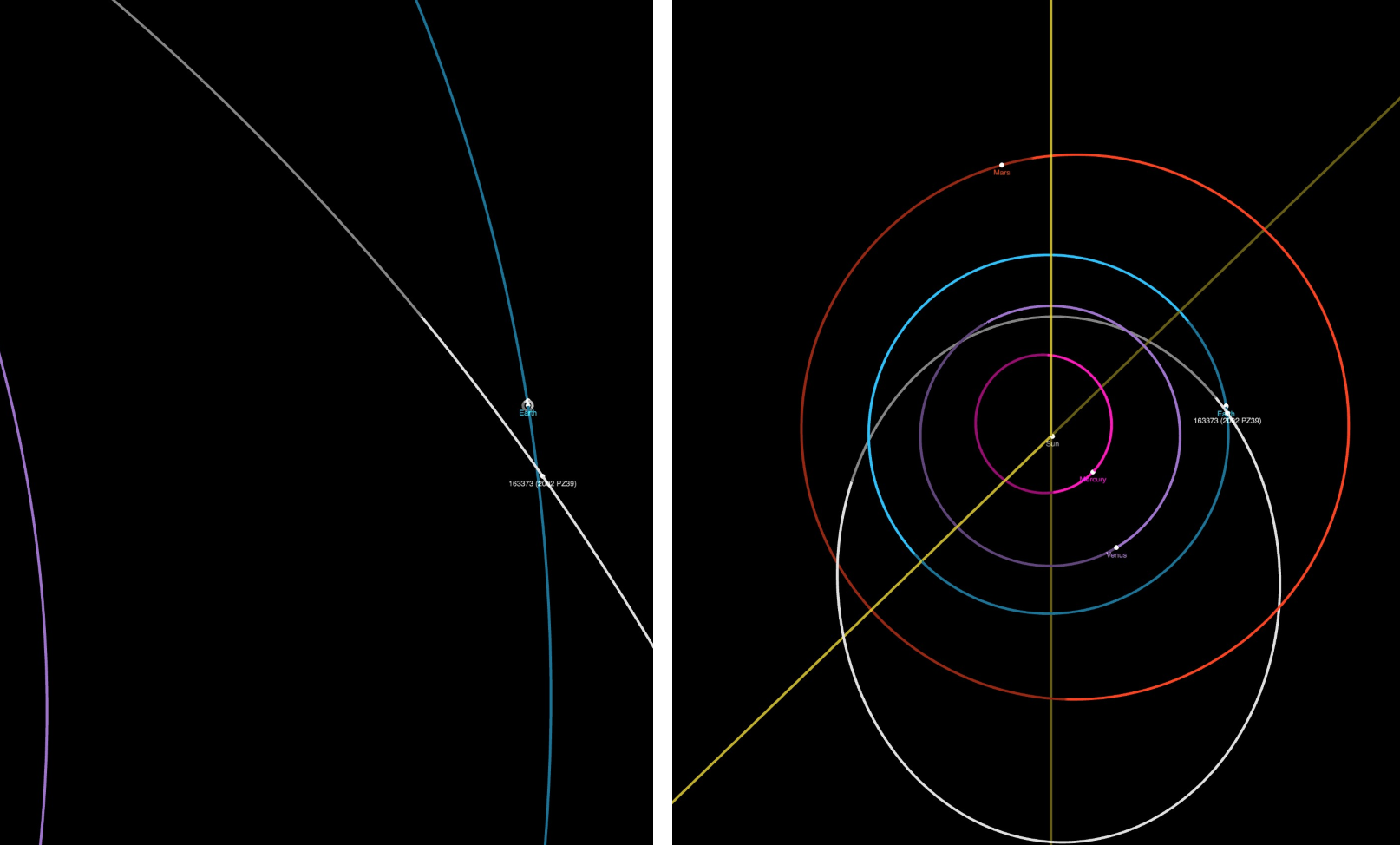 While there didn’t seem to be any official response from NASA, JPL, or a handful of other major space agencies, somebody from NASA did tell Snopes the following: “The trajectory of asteroid 2002 PZ39 is very well known. It will pass by Earth at a distance of about 5.77 million kilometers (approximately 3.59 million miles). The asteroid will approach no closer than about 15 times the distance of the Moon.”

While there’s obviously the potential for various catastrophic scenarios if a large asteroid did ever collide with our planet, the actual odds of one doing so are quite slim. The Impact event wiki, for example, notes that “Asteroids with a 1 km (0.62 mi) diameter strike Earth every 500,000 years on average,” which gives some sense of the time scale we’re talking about with the half-kilometer-wide 2002 PZ39. (For reference, a kilometer is about .62 miles.)

JPL also has a page discussing the broad strokes of the likelihood of a catastrophic asteroid hitting us, and again, there doesn’t seem to be much to worry about. While civilization-ending asteroids have, and can still, hit Earth, they not only do so with extraordinary infrequency, but they are also large enough to spot long before they hit us. From the JPL page:

Because of the ongoing search efforts to find nearly all the large NEOs, objects will occasionally be found to be on very close Earth approaching trajectories. Great care must then be taken to verify any Earth collision predictions that are made. Given the extremely unlikely nature of such a collision, almost all of these predictions will turn out to be false alarms. However, if an object is verified to be on an Earth colliding trajectory, it seems likely that this collision possibility will be known several years prior to the actual event. Given several years warning time, existing technology could be used to deflect the threatening object away from Earth.

Now, if—and that is, for all intents and purposes, an impossible if—2002 PZ39 did hit Earth, would the damage indeed be catastrophic? To some extent. This video, “How Big Does An Asteroid Have To Be To Destroy All Life?” says that an asteroid with a diameter of roughly .8 km (or .5 mi) would cause widespread earthquakes and release the energy equivalent of 100 billion tons of TNT, but would not wipe out humanity. And 2002 PZ39 is even smaller than that. Plus we can take comfort in the fact that… it’s not going to hit Earth! And if it does, we can only hope we get another beautiful reunion between Jenny Lerner and her father.

The best part of this bunk asteroid story is remembering how good Deep Impact is.

What do you think about the reports of 2002 PZ39 “approaching” Earth? Should we just ignore news of supposed near-misses like these or is the science still interesting enough to warrant a discussion? Let us know your thoughts in the comments!