You might have noticed a rather odd and unnerving game played on Tabletop Season 3. Something like a roleplaying game, but with a rickety spire of wood instead of dice. It’s a two-part episode, cast in shadow and featuring a plotline that could easily be found in a horror movie. This is Dread, a celebrated, yet obscure game by The Impossible Dream with simple rules that leverage the power of anticipation to create an unquestionably memorable one-shot roleplaying experience.

‘Cause when the blocks fall down, somebody is probably going to die.

The game uses blocks from the familiar family game Jenga and the rules of Dread are quite simple, as shown below:

Game play: Throughout the game, the host describes what happens to and around the characters. Players contribute by declaring what their character is doing. The game ends when the story comes to a conclusion, or when all of the characters have been removed from play.

Mechanics of play: Dice, cards, or other more-traditional randomizers are replaced by a tower of blocks. When a character attempts a task beyond their capabilities, the tower determines their success. They can succeed by successfully pulling a block, or choose to fail by not pulling. Tension builds as the tower becomes more and more precarious.

That’s pretty much it. Time to grab a Jenga and go scare your friends. 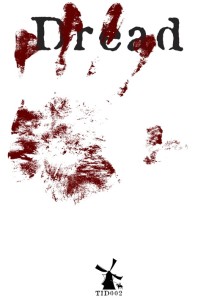 You can download a complete quickstart version of the rules here. It’s four pages and worth printing out for your game. You’ll find they’re slightly more complex than what we’ve posted above, but not much. Print and PDF versions of the full Dread corebook can be found on the The Impossible Dream’s website. While the free versions of the rules are useful, the main Dread book is fantastic in that it enumerates and delves into the specific kinds of horrifying games you might construct: suspenseful, supernatural, mad, moral, mysterious, and gory.

As for adventures, the three scenarios from the main Dread book are available for free right here at the bottom of the page, as well as a newer fourth module, simply called “13.”  These horror stories vary from science fiction to something more akin to campfire tales. Other sources of adventures are available as well, such as Windmill Game Co.’s two scenario collections; the first about post-apocalyptic wastelands, and the second focused more on fearful childhood stories. Fans have put together interesting scenarios for the game too, such as David Schirduan’s AI-centered scifi adventure Only the Food.

Dread might not be the mainstreamiest game out there, but it can clearly make for a memorable night of horror and suspense, so check it out.

And if you haven’t already, be sure to watch the Dread episodes of Tabletop as Wil Wheaton terrifies guests Laura Bailey, Molly Lewis, and Ivan Van Norman, starting with the one below: